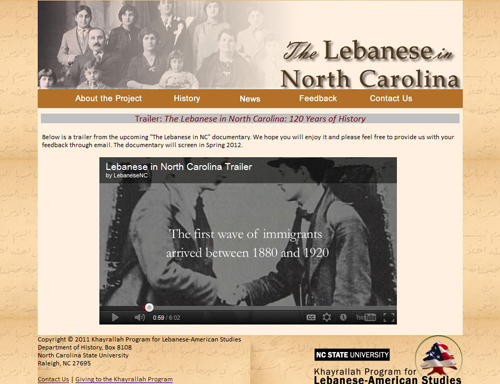 Curious about how folks with such last names as Zaytoun, Saleeby, Baddour or Hatem ended up in such towns as New Bern, Salisbury, Goldsboro or Rocky Mount? If so, then check out a documentary screening scheduled for April 12 at the North Carolina Museum of History. A team led by N.C. State professor Akram Khater has produced Cedars in the Pines: The Lebanese in North Carolina. The film documents the settlement of Lebanese in the Old North State, from the first wave seeking economic opportunity in the late 19th and early 20th centuries to a second wave fleeing civil war in the 1970s and 1980s. Cedars in the Pines is part of a larger effort to record and share the history of settlers who first made their livings as peddlers and shop owners and who now make their mark as doctors, developers, lawyers and politicians.

We at the North Carolina Collection are proud to have shared our resources and expertise with the project.

The first screening of the film is already booked up. But organizers have scheduled a second free screening. Reservations for that event are filling up quickly.

2 thoughts on “Cedars in the Pines: A Documentary on Lebanese in North Carolina”