Several new titles just added to “New in the North Carolina Collection.”  To see the full list simply click on the link in this entry or click on the “New in the North Carolina Collection” tab at the top of the page.  As always, full citations for all the new titles can be found in the University Library Catalog and they are all available for use in the Wilson Special Collections Library.

Outside of gelatin molds the number one recipe item I’ve seen thus far in searching through our cookbook collection is sherry.  You can’t go but a few pages without finding some recipe with a dash of sherry here or a cup of sherry there.  So grab your favorite bottle of sherry and try out a few of these recipes. 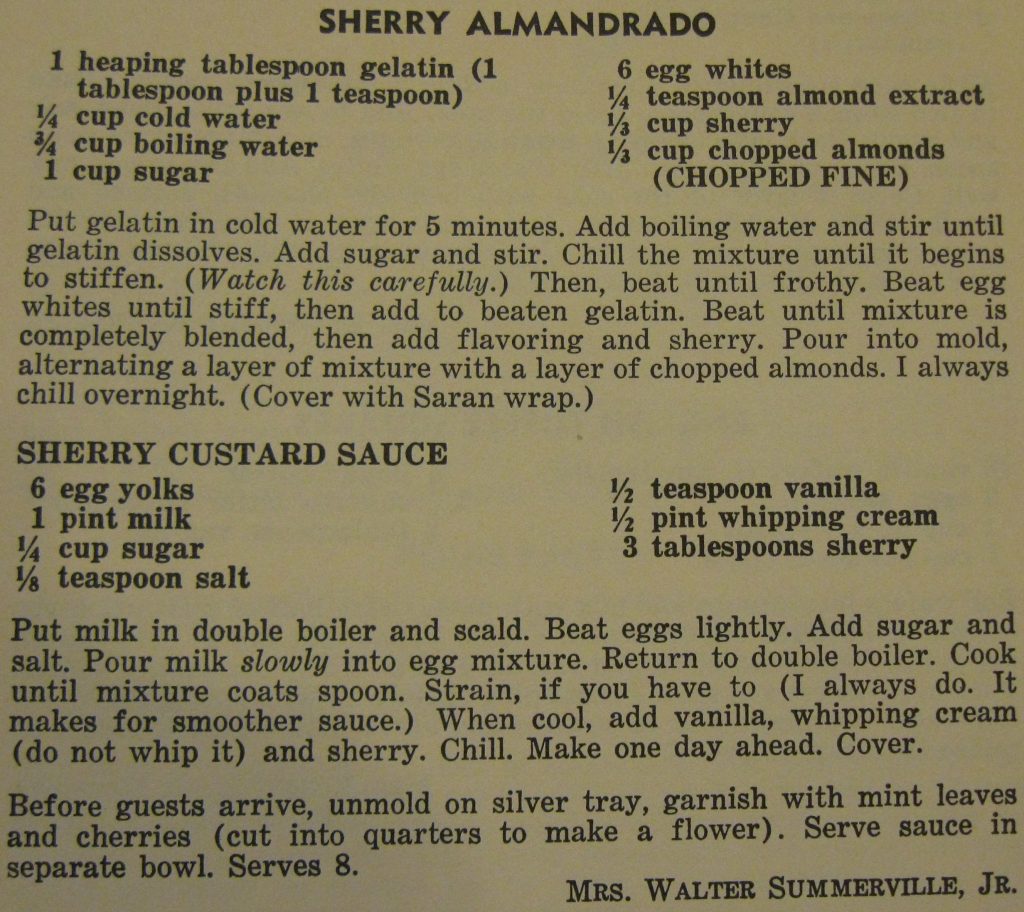 
Researchers with the First Colony Foundation and the British Museum say a 16th-century map of the Carolina coast could help solve the Lost Colony mystery. Officials with both organizations plan to discuss their findings at UNC’s Wilson Library on Thursday (May 3) at 10 a.m.

Researchers have spent several years studying and conducting tests on John White’s 1585 map “La Virginae Pars,” which shows the coast from Cape Charles to Cape Lookout and west from the mouth of the Roanoke and Neuse rivers. White joined a 1585 expedition from England to establish a fort and base for survey of the coast and interior of Virginia and the Carolinas. The expedition and their settlement was subsequently dubbed the Roanoke Colony. White’s drawings and paintings combined with the field notes of Thomas Harriot, a mathematician and navigator on the expedition, document the physical and natural environment of the areas as well as the native people who were living there.

White and Harriot returned to England with their fellow colonists in 1586. Harriot described his findings in A briefe and true report of the new found land of Virginia, published in 1588. Two years later, in 1590, engraver and editor Theodor De Bry republished Harriot’s account, illustrating the volume with some of White’s sketches, including a version of the artist’s map of the Virginia and Carolina coast.

Even before publication of their written and visual accounts of Virginia and Carolina, Harriot and White saw their works used to drum up interest in further exploration and colonization of the region. In 1587 White led a group of settlers on a return visit to the Roanoke colony. Upon arrival in late summer, the group found itself short on supplies. Barely a month passed before White left his family, including his newborn granddaughter, and other colonists to return to England in search of aid.

Three years passed before White could return to the Roanoke Colony and when he did, in 1590, he found no one there and few indications of the settlers’ fate. Thus began the mystery of the Lost Colony. And it’s that mystery that the First Colony Foundation and the British Museum hope to offer a few clues toward solving during their announcement tomorrow. The event will be webcast live at http://carolinaunion.unc.edu/live.