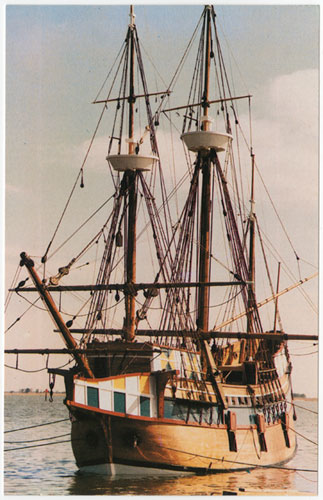 By mid-April three vessels were being readied for the passage to America: a 120-ton ship named Lyon, a flyboat, and a pinnace. When the little fleet finally set sail from Portsmouth on April 26, it was reported that 150 men had signed on as colonists, not counting wives and children and, apparently, some single women.

Two other passengers on White’s vessels are mentioned only casually in the written accounts. These were Indians, natives of coastal Carolina who had been brought back to England by either Lane or Grenville the preceding fall. One was Towaye, who may have been the Indian captured by Grenville when he visited Roanoke Island and found the fort and settlement deserted. The other was Manteo….Having spent his second winter in England, again probably in Raleigh’s household, Manteo seems to have so ingratiated himself with his host that Raleigh instructed White to install him as head of the deceased Wingina’s domain when they returned to Roanoke Island….

The departure of three vessels from English waters, already later than had been customary for the prior crossings of the Atlantic, was delayed further when White made stops at the Isle of Wight and Plymouth after sailing from Portsmouth. It was thus May 8 when they finally cleared for the long crossing to the West Indies, a voyage that took forty-two days….Apparently, they encountered bad weather off the coast of Portugal, for there is a single sentence entry in White’s report that reads, ‘The 16. Simon Ferdinando Master of our Admirall, lewdly foresooke our Flie boat, leaving her distressed in the Baye of Portingall.’

From Roanoke Island: The Beginnings of English America by David Stick. Today marks the 425th anniversary of the departure of a group of English settlers for Roanoke Island. The fate of most remains unknown to this day. They are remembered as the Lost Colony.

On this day in 1985: The Rev. Sun Myung Moon, founder of the Unification Church, receives an honorary doctorate from Shaw University Divinity School in Raleigh.

Although school officials cite Moon’s humanitarianism, his resume also includes $60,000 in donations. “Anyone who makes a contribution has a right to be honored,” one board member contends.

Moon’s wife accepts the degree in his behalf; her husband is serving time in federal prison for tax evasion.