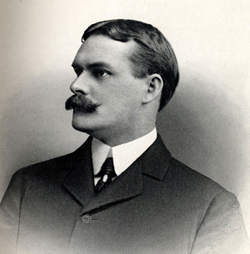 Willis Haviland Carrier may get credit as the first to devise a system for simultaneously cooling, dehumidifying, circulating and cleansing the air. But it’s a Tar Heel, Stuart W. Cramer, who coined the term to describe the system. Cramer delivered a talk on “Recent Development in Air Conditioning” at the annual conference of the American Cotton Manufacturers Association in May 1906.

We’ve got more on Cramer and air conditioning in our latest This Month in History. Check it out.

“Expressions  common to all parts of the state [but] not current  in Virginia or South Carolina — real Tarheelisms — are exceedingly scarce. These two words may perhaps be so regarded: tow sack and biddie!

“Tow sack for a burlap sack is in general use throughout the state and very little outside its boundaries….

“The chicken call biddie! widdie!, though used in New England and on Delamarvia, is nevertheless characteristic of North Carolina….

“The expression He lay (or laid) out of school, which is current in all except the northeastern part of the state, has certainly been disseminated from the North Carolina piedmont, down the Cape Fear and Peedee and up into the mountains…. ”