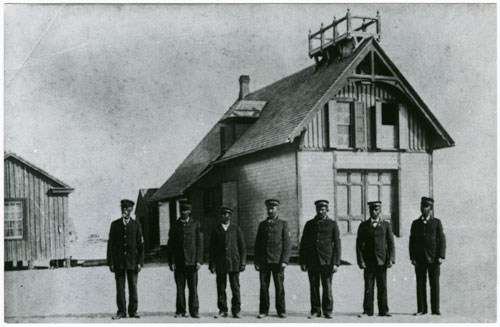 Benjamin Bowser had first come to the station the season before. Etheridge had initially hired him to be the ‘winter man’–the number seven surfman who augmented the crew by one from December through March, the most dangerous months.

As the newest and lowest-ranking member of the crew, Bowser had to prove he deserved his place among the veterans. He was the designated volunteer for all the least desirable duties. When they made mock rescues during the weekly Monday and Thursday drilling with the beach apparatus, Bowser stood in as the ‘shipwreck victim,’ waiting out on the wreck pole to be hauled in on the breeches buoy while the others operated the Lyle gun, lines and crotch. And the keeper thought nothing of waking up a rookie surfman in the middle of the night–any of the crew, for that matter, but especially a rookie–and having him recite on the spot procedures and codes from the ‘blue jacket’ manual. Each man understood that, even in a haze of sleep, he’d better know the material….

At twenty-eight, Bowser was the youngest of the crew, and standing five feet eleven inches, he was also the tallest. Lithe and bespectacled, he looked sharp: quick-witted and nimble afoot. Before joining the service, Bowser, like his father before him, had fished….

The future surfman learned quickly to work an oar and steer a boat in both sound and sea. He understood the tides, weather, and such of the region, and the Bowsers, father and son, had success fishing….Still, despite his good fortune as a fisher, the steady income and the status of being a surfman drew the younger Bowser to Pea Island.

–from Fire on the Beach : Recovering the Lost Story of Richard Etheridge and the Pea Island Lifesavers by David Wright and David Zoby.

Benjamin Bowser Jr. served at the Pea Island Life Saving Station from 1884-1900. The lifesaving station was staffed by an all-black crew and is credited for saving more than 600 lives, the greatest number of rescues of any station in the Life Saving Service. Bowser worked under Richard Etheridge, Pea Island’s first station keeper. When Etheridge died in 1900, Bowser took over as keeper. Sadly, he served as keeper for only a few weeks before dying. Bowser is being honored tonight in Jarvisburg.

A work as ambitious as John Sutherland’s just-published “Lives of the Novelists: A History of Fiction in 294 Lives” is bound to contain errors, but of course the one that caught my eye was the mislocated North Caroliniana:

“[William Sydney Porter] died, aged only 48, of alcohol-induced cirrhosis of the liver, in North Carolina where he had gone to recover his health.”

Actually, the Greensboro-born Porter — known to generations of readers as O. Henry — died in New York City (on June 5, 1910, which made him 47, not 48). He was buried in Riverside Cemetery in Asheville, near his wife’s hometown of Weaverville.