‘The library is the focal point of the university,’ he said.

They walked step by step toward it. It was the shape of the Parthenon. The smell that came out the swinging doors toward them was cool, bookish, and echoey.

‘Are we supposed to?’

‘Of course!’ Actually he did not know whether they were allowed or not, but because she questioned, he bade, his authority staked on it.

Step by step they mounted the stairs. They stopped under the columns, looking upward. Isn’t beautiful?’ he asked, reveling….

They entered through the glass doors. Once in the elegant foyer, they were awed by the tallness of the high green dome, the marble floor, the chiseled staircase, the cold draft, and the whispers. They clung near each other, inching toward the carved banisters that led to the second floor, the Main Library.

There was a naked statue of a Woman of Learning with nothing on and a book in her hand. She stood at the bottom of the stairway near a glass display case showing pictures of textile machinery.

‘I am going to this university too,’ Urie suddenly announced.

Her words felt momentous. These were the first words since the Bishops had arrived in Ephesus that gave a definite direction to her future. Yet the minute she had spoken them, it seemed settled and lost all importance. On the way upstairs they passed a drinking fountain. They bent down and drank out of it….

At the top of the stairs there was another statue. It was of a naked boy faun taking a splinter out of his foot. He had a wicked look on his face, and his big toe pointed to the card catalogue.

‘Urie,’ said Zebul.
‘What?’
‘Let’s take out a book!’
‘Can we?’
‘Sure.’
‘But what if it’s just for college students?’
‘All they can say is No, isn’t it? We’ll say we are students. They’ll never know whether college or high school.’
‘How old are you?’ she asked.
‘Thirteen, but my birthday is in sixty-four days.’
‘I am one month older than you,’ she said.
‘Be very nonchalant,’ ordered Zebul.
He headed for the card catalogue. She followed him. He opened a drawer. It was like a mouth opening. They stared at the names, thousands of them slipping before them.

–From Entering Ephesus, the 1971 novel by Chapel Hill writer Daphne Athas. The passage is part of a larger excerpt from Athas’s novel that’s featured in the recently-published compilation 27 Views of Chapel Hill.

Entering Ephesus is a coming of age novel centered around the Bishop family–parents and three daughters–living an impoverished, and somewhat bohemian, life in the towns of Haw and Ephesus. Haw, a working class town with an old mill, resembles Carrboro. And Ephesus, a college town, appears modeled after Chapel Hill.

The ancient city of Ephesus featured a grand library that also served as the tomb for the Roman governor Gaius Julius Celsus Polemaeanus. But the library described in the passage above bears a remarkable resemblance to a place closer to home and near to the hearts of North Carolina Collection staffers, the Louis Round Wilson Library. Wilson was the main library at UNC for more than 50 years.

I hate to ruin the beauty of Athas’s writing by planting a real image in your heads. But here’s a photograph of The Boy With a Thorn, a statue that rests at the end of the main hallway on the second floor of Wilson. It’s a late 19th-century Italian marble copy of the original Greek bronze titled The Spinario, which dates to 500-400 B.C. The sculptor of the statue in Wilson was P. Bazzanti of Florence. Bazzanti’s work furnished the home of George Watts Hill of Durham until he gave it to Wilson Library in 1952. 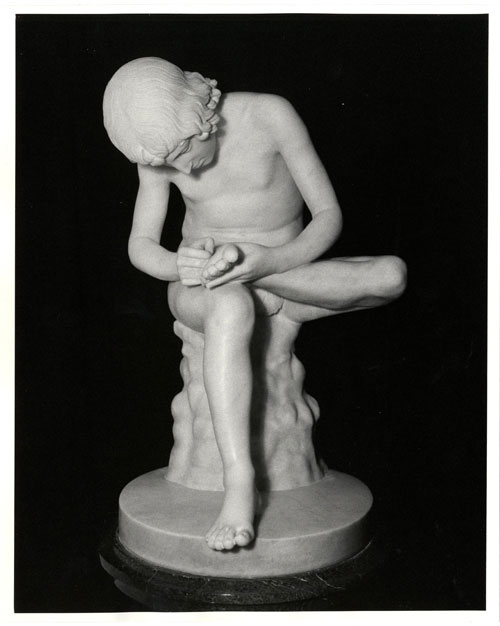