One of my favorite pamphlets — and definitely one of the best titles in the North Carolina Collection — is now available online. It’s the story of George L. Smith, an itinerant bootlegger who spent his whole adult life in and out of jail. The full title is:

The Life of George L. Smith, North Carolina’s Ex-Convict, Boldest and Bravest Blind Tiger Man Who Has Run Blind Tigers in Nearly Every Town in North Carolina, and Served 23 Times on the Chain Gaings and Been 208 Times in Jail, and Been Driven Out of 64 Towns and Counties of North and South Carolina, and 4 Times Ordered by Judgest to Leave the State.

As I mentioned in an earlier post, a “blind tiger” is not an animal, it’s an old term for the sale of untaxed alcohol. Or in Smith’s terms, “Of course, you all know that means selling whiskey without license behind the curtains.”

The pamphlet is primarily an account of Smith’s run-ins with the law and is written in an unpolished, conversational style. The work as a whole provides a fascinating account of the culture of alcohol consumption and law enforcement in early 20th-century North Carolina. The work ends with Smith’s repentance and plea, “Now, if every one who reads this book will make up their minds never to have anything to do with whiskey, I would never regret my sixteen years of trouble.” 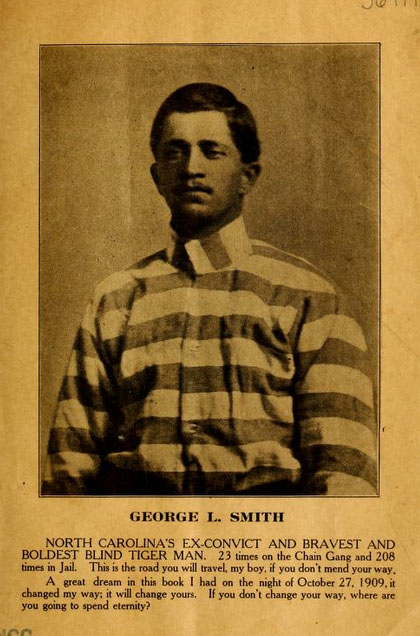