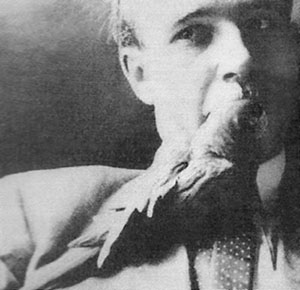 It can be hard to determine just what’s going on in this grainy, black-and-white photo. It’s a bird and a man; that much is clear. To be more specific, it’s a Carolina Parakeet comfortably perched on a man’s necktie.

This 1906 photograph is remarkable for a number of reasons. Among them is the man’s seeming nonchalance despite the alarming proximity of a bird to his face. But this is also an extremely rare photo of a live Parakeet, a bird that’s been extinct since about 1920. And the story of this particular Parakeet is even more remarkable than the photo.

A member of the family

The Parakeet was named Doodles. Doodles belonged to the Smithsonian scientist Paul Bartsch, who kept him as a pet. (Nowadays respected scientists don’t keep endangered species as pets, but those were different times.) The man in the photo is identified only as “Mr. Bryan,” who we might assume was a visitor to the Bartsch household.

Dr. Bartsch adopted Doodles after the bird had been rejected by his captive parents. Bartsch taught him how to feed himself and Doodles quickly became part of the family. In a reminiscence about Doodles, Bartsch wrote, “He shared our meals, was well behaved, and stuck to his own plate almost always.”

The “well-behaved” claim is belied by other tales Bartsch tells: Doodles prying jewels from their settings. Doodles escaping to run around the neighborhood with the local pigeons. But Doodles also seems to have been a very sweet bird, napping on Bartsch’s cheek in the morning, or nestling with a pet squirrel for company.

It’s hard to reconcile these latter stories with the image of the wild, squawking flocks presented by naturalists like John James Audubon. But such is the enigma of the Carolina Parakeet.

When Doodles died in 1914, he was one of the last known captive members of his species.

The Parakeet in the Gallery