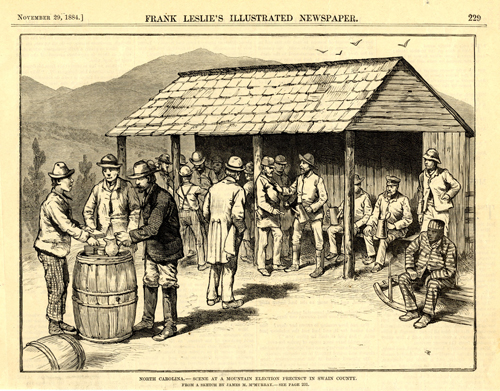 The polling-places of such out-of-the way districts as Nantahala Precinct, Swain Co., N.C., where our sketch was made on the day of the late Presidential election, are not provided with all the modern conveniences, nor are the honest voters addicted to vain pomp and personal display. The sacred privilege of the franchise is exercised in an old wagon-shed, adjoining a corn-crib. The ‘judges’–he is a small man, indeed, in that section of the country, who bears a less important title than that of judge or colonel–seated on a bench, are the inspectors of election. Each guards a tin coffee-pot, which serves for a ballot-box. Occasionally a judge leaves his seat and circulates amongst the crowd, electioneering, coffee-pot in hand. Refreshments, in the form of ginger-cakes and cider, are to be had on the premises, and such a thing as a drop of blockade whisky is not, we presume, wholly unobtainable. The gathering is a mixed one, and includes a paroled convict in uniform, who probably is employed in the construction of a railroad in the vicinity. There is not much style about the balloting up there in the mountains, but in the great national result the votes count just the same as though they had been cast in a crystal and nickel-plated ballot-box in a brownstone-front polling-place in the city.

We’ll be examining historic political campaigns in North Carolina during a conference on Sept. 14-15 and we hope you’ll join us. Details on “To Gain Attention to Their Various Claims”: Historic Political Campaigns in North Carolina are available here. In the lead up to the conference, we’ll be sharing other interesting tidbits about campaigning and campaigns on the blog. Keep checking back.

“Former Senator Elizabeth Dole of North Carolina… is the only name on this list [of women Mitt Romney might choose as a running mate], apart from [Michele] Bachmann, to have officially run for president before — although her candidacy, in 2000, was mostly a flop. Her strong personal qualities and long history of public service might nevertheless make her an interesting choice, but she would be 76 years old upon her inauguration next year.

“That would make her the oldest vice president on inauguration by some margin; the current record-holder is Alben W. Barkley, who was sworn in at 71 in 1949. Since Mr. Romney, 65, is himself fairly old, and since the Constitutional function of the vice president is to be ready to step in if the president dies or resigns, that is probably disqualifying.”

— From “In Search for Female Running Mate, a Shortlist for Romney” on Nate Silver’s FiveThirtyEight blog in the New York Times (July 13)