The accomplishments of North Carolina’s native son Kay Kyser have been well documented: UNC cheerleader, class president, and bandleader; host of the successful radio show Kay Kyser’s Kollege of Musical Knowledge from 1938 to 1949; big band leader with eleven number-one records to his name; star of seven feature films. Kyser’s rise to fame was swift, and he left an indelible mark on the Big Band era.

That’s all well and good, of course, but what did he wear to the beach?

The answer is our July Artifact of the Month. 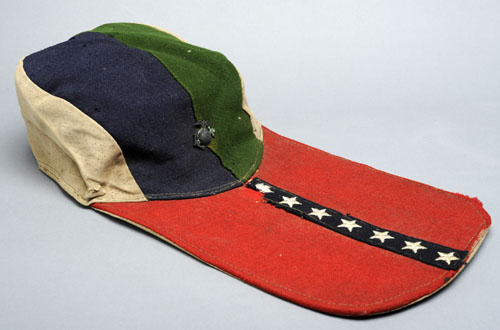 When Kay Kyser headed to the shore, he used this red, white, green, and blue cap to shield his face from the sun. The cap’s exaggerated brim displays some of the characteristic whimsy for which Kyser was known throughout his show-biz career.

The hat also bears a U.S. Marine Corps insignia pin, but the only connection I could find between Kay Kyser and the military is his performance of a song called “Tell It to the Marines.” (If you know of something I’m missing, please chime in with a comment!)

Readers curious to learn more about the life of Kay Kyser can consult the papers of Kay and his wife, Georgia Carroll Kyser, which are in the Southern Historical Collection.

We’re thrilled to add this great piece of Kay Kyser memorabilia to the Gallery.

11 thoughts on “Artifact of the Month: Kay Kyser’s beach hat”