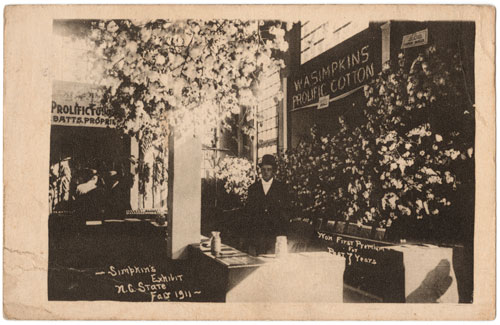 The North Carolina State Fair is set to open for its 145th year tomorrow in Raleigh. The event has changed over the years. Electricity arrived in 1884 and the first Midway ride was erected in 1891. The first food booths opened in 1900. And the first airplane exhibit was held in 1910, almost seven years after the Wright brothers first successful flights on the Outer Banks.

One constant in the early 1900s was an exhibit by William Alonzo Simpkins. The Wake County native boasted of his Simpkins Prolific Cotton Seed, which was reported to double yields and have strong resistance to the boll weevil.

Born in 1868, Simpkins worked as a manager on the cotton and truck farm of V.C. Royster. He remained there for several years, according to Moses N. Amis’s Historical Raleigh, “proving himself to be most industrious, highly capable, and a man thoroughly familiar with his business in all its details.”

Simpkins eventually began farming on his own, working land about two miles southwest of Raleigh. As Amis wrote in 1913, Simpkins’ farms were “models, in all respects, of agricultural skill, and exemplify in an eminent degree the high perfection to which agriculture may be brought when under the care and supervision of a master mind and hand.”

In 1907 Simpkins was awarded a gold medal at the Jamestown Exposition for his truck crop. According to an obituary in the January 26, 1941 edition of the Raleigh News and Observer, the medal proved one of Simpkins’ most prized possessions. 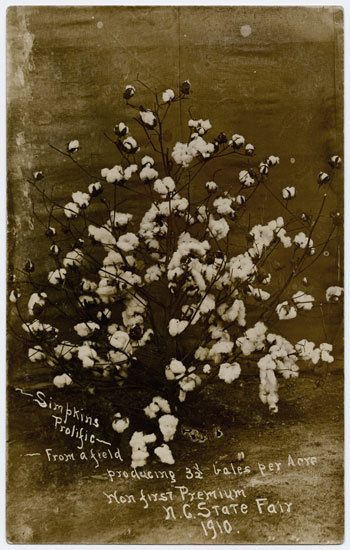 Amis records that one of the keys to the success of Simpkins Prolific Cotton Seed was the plant’s maturation before the emergence of boll weevils each year. “The Prolific is exclusively planted by the North Carolina A. & M. College [later known as North Carolina State University] on its cotton farm, and for the past seven years has taken first premium on best stalks, best seed, best lint and best acre,” he wrote. 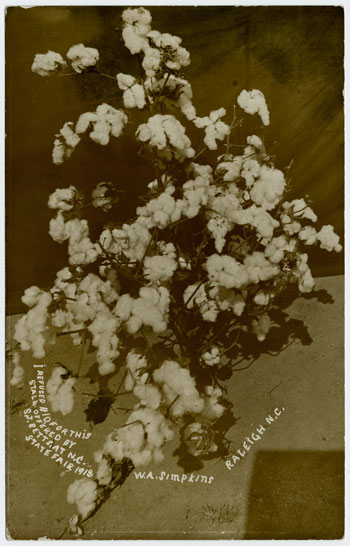 A contest Simpkins held annually at the State Fair may help explain the caption in the postcard above. He offered $15-$35 prizes to Wake County boys who produced the best cotton and the single stalk with the greatest number of bolls. Could S.J. Betts, mentioned in the caption above, be a boy who didn’t win the prize? If so, Simpkins clearly placed self-promotion above a gentle encouragement of the young. Perhaps, instead, Betts was actually Batts (see other exhibitor in top postcard). In that case, Simpkins was engaging in the ages-old practice of business–deride your competition. Of course, both explanations may be wrong. What do you think?

In addition to farming and seed sales, Simpkins devoted himself to his church. He served as a minister to a host of Primitive Baptist churches in North Carolina and Virginia for more than 25 years. Simpkins died on January 24, 1941, eight months after suffering his fourth stroke. He is buried in Oakwood Cemetery.

“Positively no dogs of any size, value, color or ugliness allowed….Guests who attempt to smuggle them in in vanity boxes or suit cases will be asked to vacate their rooms.”

— From a 1920 brochure for the Grove Park Inn in Asheville