It sounds like the advice of a frugal mother, but during World War II those words were issued from the federal government to all Americans on the home front. It was only seventy years ago that U.S. citizens were asked to be judicious in their shopping, driving, and eating habits in an effort to conserve resources and support the war effort.

The government managed rationing by providing Americans with ration books like this 1943 example, which is our November Artifact of the Month. 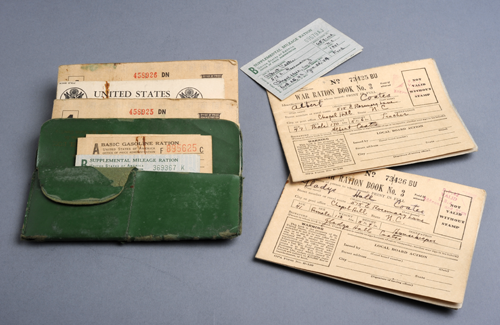 The cards here include an “A” gasoline ration, which entitled the holder to four gallons of fuel, and a “B” ration — a supplemental mileage ration issued to citizens whose work on the home front supported the war effort in some way.

The restrictions on driving were intended to conserve fuel, but more importantly they served to address a shortage of rubber. Most of the world’s rubber came from Southeast Asia, where rubber plantations were occupied by Japanese forces. Less driving meant less need to replace tires. In addition, Americans were asked to turn in any scrap of rubber they didn’t need, including old tires, raincoats, and garden hoses. 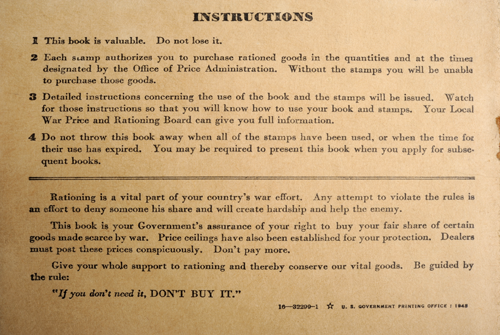 This ration book belonged to Albert McKinley Coates and Gladys Hall Coates, who established UNC’s Institute (now School) of Government in 1931. Mrs. Coates’ occupation is listed in the ration book as “housekeeper,” a title that belied her contributions both to the Institute of Government and to the study of UNC history. (Because of her research and writing on University-related topics, a University history lecture series bears her name.) 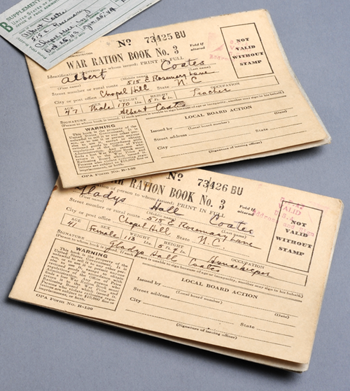 The ration book represents just one way in which World War II changed the lives of a nation and a town. This Sunday, the Chapel Hill Historical Society will present a talk that looks more deeply into the war as it played out locally.

In honor of Veterans Day, former UNC University Archivist Janis Holder will talk about the University’s contributions to the war effort and how WWII transformed the campus, particularly with the establishment of the Navy Pre-Flight School.

This free, public event takes place from 3:00 to 5:00 at the Society Office, 523 East Franklin Street (lower level of old Chapel Hill Museum building). A reception will follow the program. See the attached flyer (PDF) for more information, or call the Chapel Hill Historical Society at 919-929-1793.