On this day in 1812: A ship bearing Theodosia Burr Alston, 28-year-old daughter of former vice president Aaron Burr, is lost at sea, most likely to a storm off Cape Hatteras.

She and her husband, South Carolina Gov. Joseph Alston, had just lost their 10-year-old son to malaria, and she was eager to leave their rice plantation and spend time with her father in New York.

“That ritual hypocrisy [in Jim Crow laws] was made clear when I spent time working on the liberal-minded News & Observer of Raleigh, North Carolina. The newspaper was edited by the doughty Jonathan Daniels, a New Dealer and for a short time press secretary to President Harry Truman….Daniels was a fine writer and open-minded, as were his staff.

“Tagging along with the paper’s columnist Charlie Craven, who could see the funny side of anything, I half-forgot the predicament of blacks. Then one hot day I stopped to drink at a town water fountain, one marked ‘White,’ situated next to one marked ‘Colored,’ and looking up up I saw that the adjacent statue was dedicated to ‘Liberty and Equality.'”

— From “My Paper Chase: True Stories of Vanished Times” by Harold Evans (2009)

Sir Harold Evans, best known as editor of the Sunday Times in London (1967 to 1981) and now as husband of magazine editor Tina Brown, spent time at the News & Observer during a year-long fellowship in the United States in the mid 1950s.

A reference request today led me to this editorial that Jesse Helms penned for the January 1959 issue of the Tar Heel Banker. The magazine was a monthly publication from the North Carolina Bankers Association. Helms served as executive director of the group for much of the 1950s and, in that capacity, also served as editor of the publication. Some of the lines from this Helms editorial, titled “Compromise into Oblivion” are often quoted. But the full context and source are rarely cited.

As Congress and the President renew their efforts to avert the “fiscal cliff,” let’s hope compromise is little more appealing than Helms suggests.

If you happen to be a devotee of U.S. Senator Hubert Humphrey, you’ll just have to forgive us. We want no part of the Humphrey way of doing things, and, frankly, all this recent effort to picture the Minnesota Senator as some sort of international statesman gives us a pain.

We’ll acknowledge one thing about the man and then we’ll retreat no further. He is a talking machine of considerable persistence and energy. But any citizen entertaining the barest idea that the Senator has any strong leanings towards free enterprise, anti-socialism or fundamental Constitutional government had better beware.

There is one valuable lesson to learn from observing Senator Humphrey’s record, however. And it is a lesson that today’s faint-hearted leaders in the so-called right wing might well study. The lesson: don’t give up just because you’re in the minority.

When Humphrey went to the Senate in 1948, he was in the minority. Not only that, he was considered by his fellow Senators to be a sort of eloquent joke. But Humphrey wasn’t joking. He was a left-winger and he didn’t mind playing the role. He talked and he screamed; he raved and he ranted. Though his fellow Senators chalked him up as a publicity-seeking ineffectuality—which he was—Humphrey was betting that the trend was moving his way. It was.

So, today Senator Humphrey has achieved a degree of success that not even he expected ten years ago. His plea for bigger, more powerful government has been answered. His so-called civil rights program has been thrust, almost entirely, upon the South. The liberals are in the saddle everywhere and complete socialism is just around the corner.

Sounds pretty bad, doesn’t it? But if you doubt it, just look around you. Measure the prospects for 1959 and the years beyond. Point if you can to the slightest glimmer of hope for those who believe in less government control, less government expenditures, less taxation.

But even these are not the worst signs of the times. Worse than the trend itself is the attitude of those holding public office who privately do not like or agree with the trend. But are they doing anything about it? Don’t be silly!

The only men in a position to do something about it are faint-hearted!

At a time when this nation needs men of courage, what do we hear? We hear statements that the South “may be able to compromise” with those who would destroy the very fundamentals that made this country great.

Compromise, hell! That’s what has happened to us all down the line—and that’s the very cause of our woes. If freedom is right and tyranny is wrong, why should those who believe in freedom treat it as if it were a roll of bologna to be bartered a slice at the time?

Hubert Humphrey was not afraid of being in the minority ten years ago. Today he is trotting secrets between Kruschev and Eisenhower. Tomorrow he may be president.

All he needs is a few more compromises. Given them, he has the persistence and energy to talk his way into the White House.

“Zelno, the balloonist, will give his first ascension Monday afternoon at Latta Park…. This afternoon he will drive through the streets and will thus advertise himself and his business.

“Zelno is known as ‘The King of the Air.’ He ‘laughs at danger’ and soars aloft with an abandon as to his personal safety that challenges admiration. He will, he says, give the best ascension ever seen in Charlotte.”

“The airship will be turned loose a few minutes after 4. Of course everyone will want to be there in time to see the start as well as the finish.”

“Crowds of people — the earth was covered with them — went to the park to see the balloon ascension.

“Four-thirty came and there being no evidence of balloon or Zelno, the crowd began to be a little impatient. Five o’clock came. Zelno, it was said, had gone to town for the balloon….

“Finally he came in a buggy with his business manager, drove around the track and halted where a large crowd had gathered. Still there was no sign of a balloon, and if there had been one, Zelno was not in condition to take the trip. The people got disgusted at the fake and left….

“The next time he advertises an ascension he had better keep his head clear.”

On this day in 1906: A decade after Guglielmo Marconi of Italy sent the first radio signal, Reginald Fessenden makes the first voice transmission. From a station in Brant Rock, Mass., he broadcasts to ships at sea a program of two musical selections (including his own violin rendition of “O, Holy Night”), a Scripture reading and a short talk.

Fessenden, a native of Canada who had been Thomas Edison’s chief chemist, laid the groundwork for his breakthrough during two years’ research on the Outer Banks; barely a dozen miles away, the Wright Brothers were preparing to fly at Kitty Hawk.

A storm almost sank the Fessenden expedition on the way to Roanoke Island. Conditions continued to be harsh — crew members often had to wear mosquito netting — but 50-foot transmission towers were erected on Roanoke and Hatteras.

Reg Fessenden was considered by at least one contemporary scientist to be “the greatest wireless inventor of the age — greater than Marconi.” But the question of who would profit from radio was complex and treacherous, and Fessenden lost out in extended, bitter litigation over patent rights.

“The ferocity with which Union foragers collected provisions in South Carolina diminished once they crossed into North Carolina. ‘The army burned everything it came near in the State of South Carolina,’ Maj. James Connolly wrote to his wife. ‘The men “had it in” for the State and they took it out in their own way…. Since entering North Carolina the wanton destruction has stopped.’

“If the ‘wanton destruction’ ended, the regular form of it did not. Charles Jackson Paine wrote to his father from Raleigh in April, ‘We take of course everything eatable from the inhabitants…. The country is cleaned out behind us — & it will be hard work for the people to live till fall.'”

Bill Friday was one of the greatest North Carolinians of all time—and he could make delicious peanut brittle. As was his nature, he generously shared his recipe, as here in this piece from Metro Magazine a few years back. Making a batch could be a nice way to honor Mr. Friday, who died on October 12th.

“North Carolina was the first former Confederate state to provide funds for prosthetics [for veterans], signing an April 1866 contract with George B. Jewett, a Massachusetts inventor and the manufacturer of the Salem Leg and Arm. Governor Jonathan Worth provided a building for limb manufacturing in Raleigh and paid Jewett $5,000 in advance; in return, Jewett would sell legs to the state for $75 each, a steep discount. The state also paid for railroad transportation to the factory and housing for amputees during their fittings. 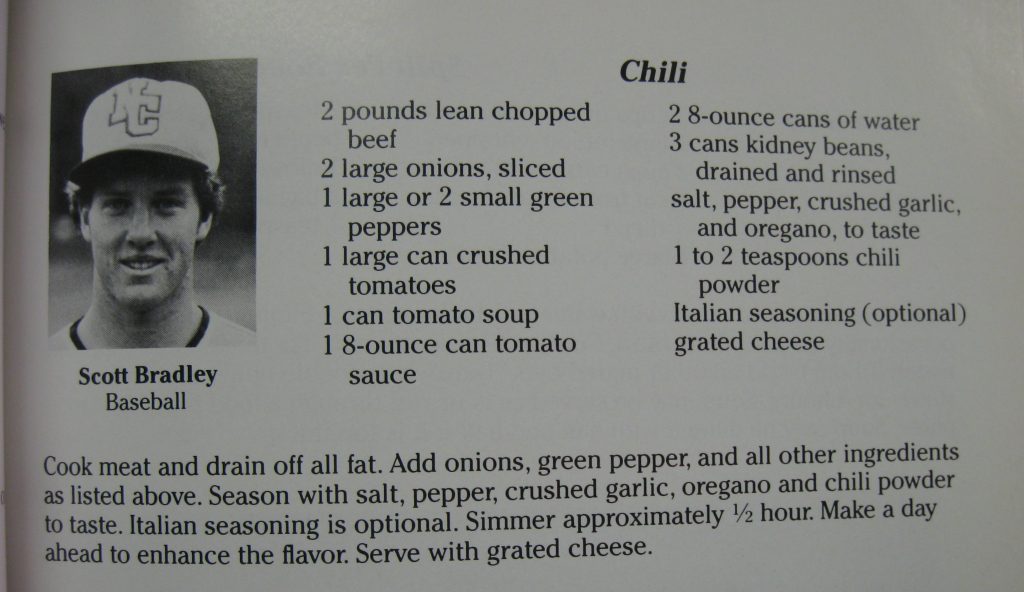 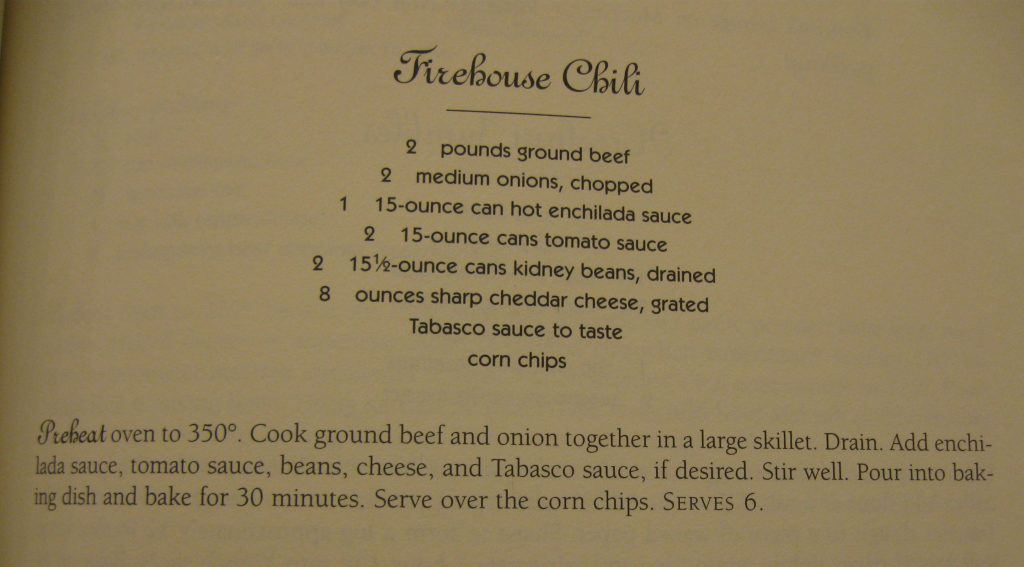 “Firehouse Chili” from The Cat Who– Cookbook.

“Chili Meat Loaf” from Just like Grandma Used to Make. 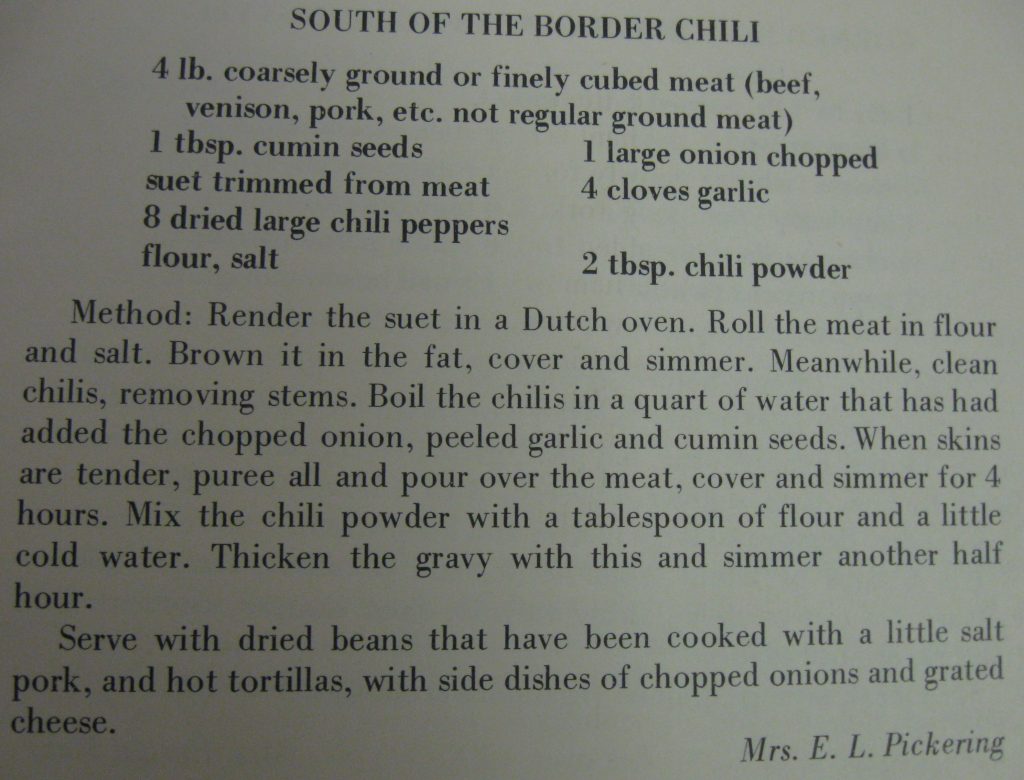 “South of the Border Chili” from High Hampton Hospitality. 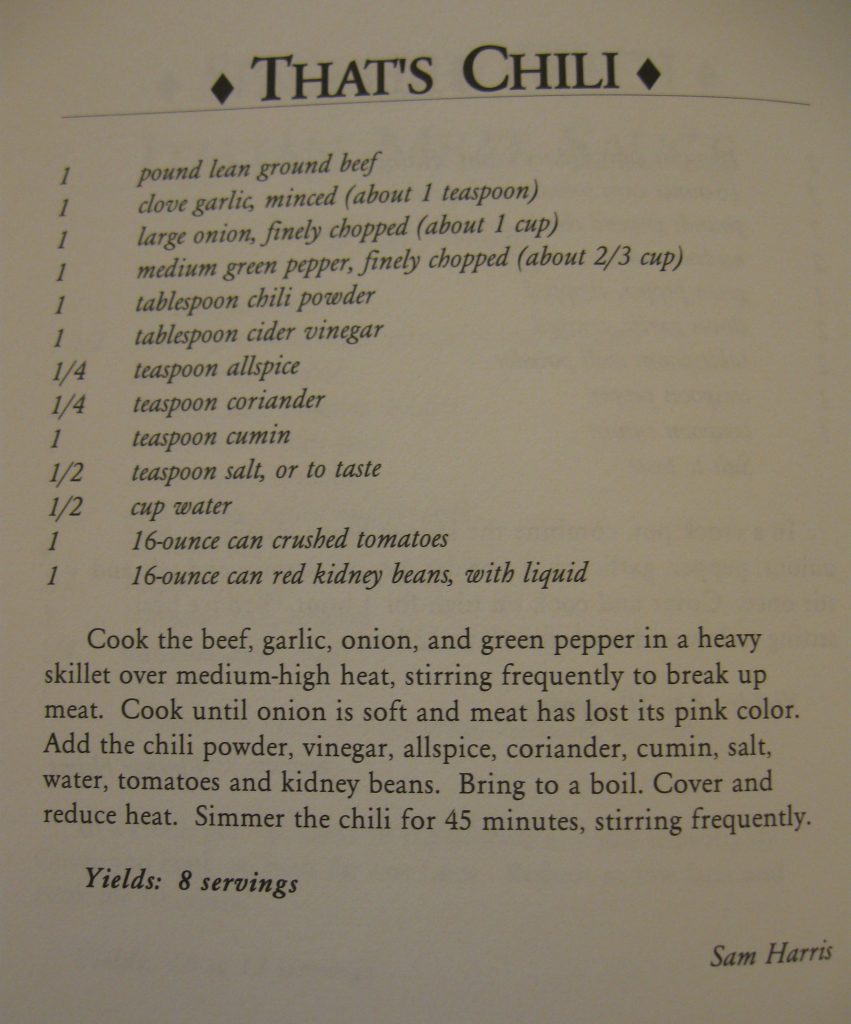 I’ve been disappointed to find such ho-hum North Caroliniana in the digital archives of the venerable New York Times crossword puzzle. The archives go back to 1993, covering the editorship of NPR stalwart Will Shortz.

OK, I did laugh at seeing our Venus flytrap described as “botanical snapper.”

—“North Carolina” (that is, NORTHCAROLINA) has been an answer only once, in the same puzzle that included “Kitty Hawk” and “powered flight.”

— “Charlotte”? Once — as “Eastern Conference N.B.A. city.” Am I being an insufferable homer to consider this a lame representation?

— “UNC” has made it 13 times, including “James K. Polk’s alma mater” and “Jordan left it after his jr. year.” “Duke”: “Where Nixon went to law school” and five others.

But here’s what really startled me: One character on “The Andy Griffith Show” has made no fewer than 90 appearances. Ninety! What ever would the Times’ puzzle constructors do without “Opie”?