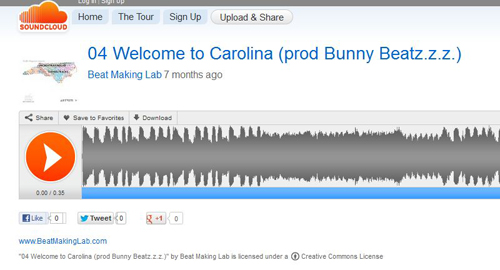 Here’s a question for you. What song would best serve as the state’s theme song?

That question came to mind this morning as I sampled the works produced by the Beat Making Lab at UNC-Chapel Hill (You can read about one of the Beat Making Lab’s projects in The News and Observer from December 2). A UNC student who uses the name Bunny Beatz.z.z. produced a short piece called “Welcome to Carolina.” With apologies to James Taylor fans (note: I realize that hip-hop is a far cry from the lilting vocals and skillful guitar licks of your idol), the song, particularly the words repeated by the female vocalist, remind me of “Carolina on My Mind.” And in my mind Taylor’s hit is emblematic of the Tar Heel state. Perhaps for a generation (or two or three) of North Carolinians, “Carolina On My Mind” serves as their state theme song. Admittedly UNC haters may think otherwise, since the song was long ago appropriated by boosters of the university in Chapel Hill.

So, share your thoughts. What songs connote North Carolina to you? Is it a Doc Watson tune? A beach music number by Durham-born Clyde McPhatter and the Drifters? Or the Piedmont blues of Blind Boy Fuller? Even Clay Aiken and Scotty McCreery are permissible. Just tell us your opinion.

“[In 1958], to communicate its contribution to the nation’s security, Douglas [Aircraft Corp.] organized a tour of its 1.5 million-square-foot plant in Charlotte, North Carolina, to show reporters and civic leaders ‘how the Nike-Hercules [missile] is assembled from start to finish.’

“The sole woman reporter [Lillian Levy of the Washington Evening Star] observed that ‘the heavy work of missile-making is strictly “a man’s job,” ‘ noting that only men toiled on metal fabrication and painting. ‘It is in all the electronic work connected with the guidance system that women dominate,’ she reported.

“Donald W. Douglas Jr., president of the company founded by his namesake, concurred: ‘Women seem to have a natural talent for the fine precision effort required.’ It was observed that female workers who packed guidance components demonstrated ‘a very domestic touch’ because of that task’s similarity with the ‘familiar kitchen chore of canning.’ ”

— From “Continental Defense in the Eisenhower Era: Nuclear Antiaircraft Arms and the Cold War” by Christopher J. Bright (2010)