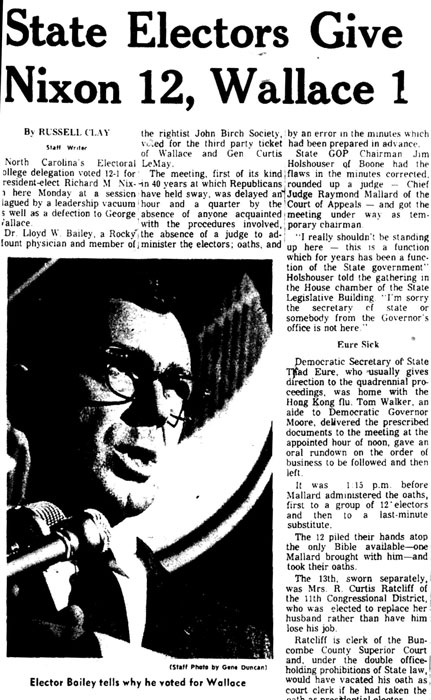 Following the Constitutional mandate that they gather on the first Monday after the second Wednesday of the month, the state’s 15 electors met at the old state Capitol building earlier today and cast their votes. The outcome of their balloting was as expected. Reflecting the Republican ticket’s victory in the popular vote here, the electors unanimously backed Mitt Romney for President and Paul Ryan for vice president.

Although tradition holds that North Carolina electors select the slate that won the popular vote, there is no law requiring them to do so. Lloyd W. Bailey made that point clear—and earned the title of faithless elector—on December 16, 1968 when he voted for the American Independent Party slate of George Wallace and Curtis LeMay. The Republican ticket of Richard Nixon and Spiro Agnew won the state’s popular vote in November. But Bailey, a Rocky Mount ophthalmologist and John Birch Society member, told his fellow electors that he believed Nixon would not produce change in Washington. He defended his stance further by noting that some Nixon appointees are “members of the un-American and infamous Council on Foreign Relations.” Bailey cited Henry Kissinger, diplomats Henry Cabot Lodge Jr. and Robert D. Murphy, and economist Paul W. McCracken as members of the group. “This organization, called The Invisible Government by Dan Smoot in his book by this title, is one which seeks to undermine our national sovereignty and merge us with the other nations under a world government, perhaps like the United Nations,” he said. Bailey also pointed out that the Wallace-LeMay ticket had carried the district he represented.

Bailey’s protest vote is one of several facts that distinguish the 1968 electoral college gathering in North Carolina. The meeting was the first for Republican electors in 40 years. And, as reported in Dec. 17, 1968 edition of The News and Observer, the session was delayed for about 75 minutes by “the absence of anyone acquainted with the procedures involved, the absence of a judge to administer the electors’ oaths and by an error in the minutes, which had been prepared in advance.”

State GOP chairman Jim Holshouser, who, in 1972, would become the first Republican elected governor of N.C. in the 20th century, served as the temporary chairman of the meeting. Electors should have received instruction in the process from Secretary of State Thad Eure, but he was sick with the flu. Holshouser enlisted Chief Judge Raymond Mallard of the N.C. Court of Appeals to administer the oath. Twelve of the 13 electors placed their hands on a single Bible brought by Mallard and took the oath. The 13th elector, Mrs. R. Curtis Ratliff, was a stand-in for her husband, who, as clerk of Buncombe County Superior Court, stood to violate a state law prohibiting double office holding if he voted as an elector. The meeting’s minutes required altering because they had been prepared in advance by the state Attorney General’s office on the assumption that all electors would vote for Nixon and Agnew.

At the conclusion of the much-delayed session, the vote tally of 12 for Nixon-Agnew and 1 for Wallace-LeMay was sealed and sent to Washington, D.C., where it was tabulated by Congress on January 6.

Our friends at the North Carolina Department of Cultural Resources remind us that today is the anniversary of the Wright brothers’ first successful flight at Kitty Hawk, N.C.

Here’s how the story was reported in the Chatham Record published on December 24, 1903: 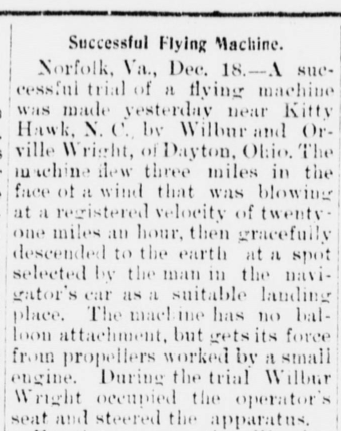 The story goes on to describe the dramatic scene, but, unfortunately, the microfilm that was digitized was quite faded, making the story difficult to read. Aviation aficionados may still want to give it a shot — by zooming in all the way on the text, it’s possible to make out just about every word. The story is on page two, at the top of the page.

As a lifelong Southerner, I have witnessed many abuses to “y’all.”

I have seen its apostrophe misplaced.

I have heard it misused to address one person, rather than two or more.

But until recently I hadn’t even considered the possibility of redundant pluralization.

As a friend and I finished breakfast at a local Pancake House, the waitress handed us the check with a cheery “OK, this is y’all’s-es’.” (Spelling suggestion, anyone?)

What a word! More amusing than offensive, at least to my ear. Is it a fledgling neologism — or have I just not been paying attention?