On this day in 1975: Black hecklers prevent David Duke, a little-known Ku Klux Klansman from Louisiana, from speaking at the University of North Carolina’s Memorial Auditorium.

Chancellor Ferebee Taylor calls the incident “a transgression of one of the highest and noblest traditions of this institution.”

Duke will go on to form the National Association for the Advancement of White People in 1980, be elected to the Louisiana legislature in 1989, challenge incumbent George W. Bush for the Republican presidential nomination in 1992 and run unsuccessfully for U.S. Senate and House seats in 1996 and 1999, respectively.

I am a person who wears hats, so perhaps it was inevitable that I would notice when campaigns used headgear to make a point. Chapeaux faux-pas have been a bit of a tradition in American politics—many of us remember the unfortunate images of Democratic presidential candidate Michael Dukakis in a helmet or the tittering when John F. Kennedy didn’t wear a hat at his inauguration. None of the hats below was voluntarily donned by candidates, rather they were Photoshop creations, assigned to a candidate to signify some aspect of his unsuitability for office. 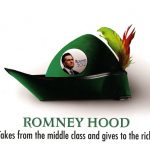 The green triangular cloth cap is instantly recognizable as Robin Hood’s hat of choice. Here the North Carolina Democratic Party uses it to get your attention while it accuses Mitt Romney of being a reverse Robin Hood—taking from people of modest means to give to the rich. The verso of the card details how he will do this. It also includes a photo of “Romney Hood and his Merry Men in Congress”—John Boehner, Mitch McConnell, and Eric Kantor—all looking anything but merry. 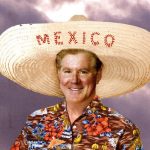 We received a lot of mailings for the race for the open seat in North Carolina House District 63. From the material we received, it appears as though both candidates were well funded, and that the race got personal at times. (More about these points in a later post.) Here Republican candidate Steve Ross has been Photoshopped into a classic “Greetings from …” postcard, to make an issue of his trip to Mexico that the Democratic Party of North Carolina claims was taxpayer funded.

But the winner for most distinctive headgear goes to this creation of the North Carolina Republican Party. Jim Messina was the Democratic candidate challenging the incumbent representative, Republican Thomas Murry, in North Carolina House District 41. Messina graduated from Harvard University and works in high tech, but in this mailing he is accused of supporting “an extreme agenda that rejects modern scientific fact and will ultimately kill economic expansion in North Carolina.” This is apparently an oblique (at least to me) reference to Messina’s objections to fracking and/or his belief in climate change. Messina lost to Murry by 1,489 votes.