UPDATED, 2/27: As Jack Hilliard points out in a comment below, the page I first posted didn’t include the whole block. I added the previous page, which also includes at least one business still operating in its 1962 location.

One of the favorite pastimes of UNC alums returning to campus is to lament how much has changed, especially on Franklin Street, the University’s “Main Street,” home to many restaurants and bars long frequented by UNC undergraduates.

The North Carolina City Directories collection on DigitalNC now includes four directories from Chapel Hill, from the years 1957, 1959, 1961, and 1962. The directories have a street directory section, enabling readers to browse residents or businesses by location. Here are the pages from the 1962 Chapel Hill directory showing the main block of Franklin Street: 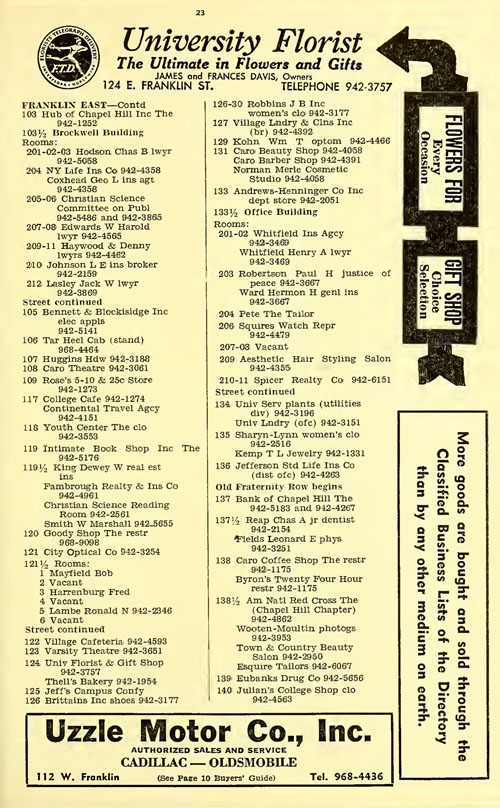 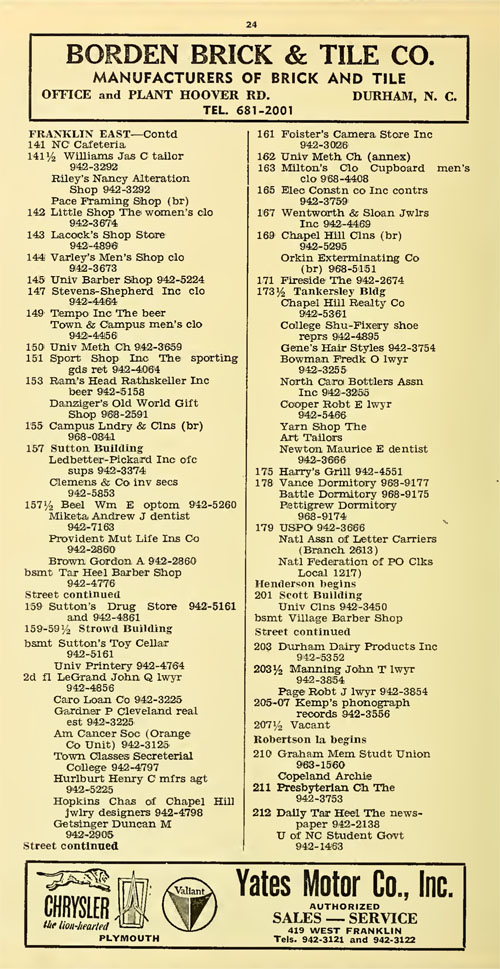 So how much has changed since then? Quite a lot. At first glance I can see only one business that’s still operating in its current location (not counting churches). Can anyone else find it? Are there any others that I missed?

On this day in 1943: Returning from a World War II mission over Germany, a B-17 bomber piloted by Hugh Ashcraft of Charlotte is flak-riddled and minus one engine. “Those who want to,” Ashcraft tells his crew, “please pray.”

The “Southern Comfort” makes it back to England, receiving wide attention and inspiring both a hit record and an enduring expression: “Coming In On A Wing And A Prayer.” Ashcraft in later life will become president of the Harris Teeter supermarket chain.

On this day in 1993: Hulk Hogan and other professional wrestlers convene in Ellerbe to scatter the ashes of “Andre the Giant” Roussimoff, perhaps the best-known wrestler in the world, at Roussimoff’s 200-acre ranch.

Four weeks earlier Roussimoff, 46, died of a heart attack while in Paris for his father’s funeral. The French-born Roussimoff, who stood 6 feet 10 and weighed 550 pounds, suffered from acromegaly, a growth-hormone disorder marked by progressive enlargement of the head, hands, feet and chest. In addition to wrestling, Roussimoff played the gentle giant Fezzick in the critically praised 1989 movie “The Princess Bride.” 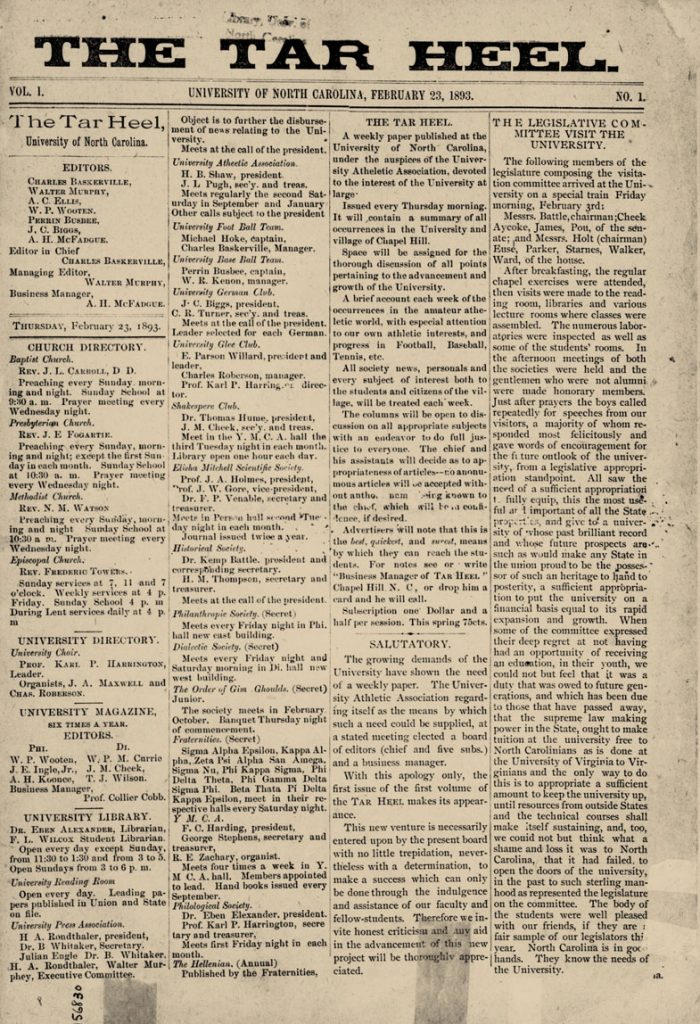 The UNC-Chapel Hill student newspaper printed its first issue on February 23, 1893. The Tar Heel‘s editors explained that the paper, issued every Thursday morning, would include “a summary of all occurrences in the University and village of Chapel Hill.” The paper vowed to cover UNC sports, “all society news, personals and every subject of interest to both the students and citizens of the village.” The Tar Heel was published by the University Athletic Association. Charles Baskerville, a Mississippi native and star student at UNC, served as both head of the Athletic Association and editor-in-chief of the paper. The Tar Heel was available by subscription, charging $1.50 per session.

Baskerville and his five sub-editors seemed to realize the weightiness of their endeavor, writing:

This new venture is necessarily entered upon by the present board with no little trepidation, nevertheless with a determination, to make a success which can only be done through the indulgence and assistance of our faculty and fellow-students. Therefore we invite honest criticism and any aid in the advancement of this new project will be thoroughly appreciated.

Indeed, many a fellow student has contributed to the success and longevity of this noted form of Tar Heel Ink. Happy birthday and many thanks to each and every one of them.

A Good Basic Layer Cake from Favorite Recipes of the Lower Cape Fear. 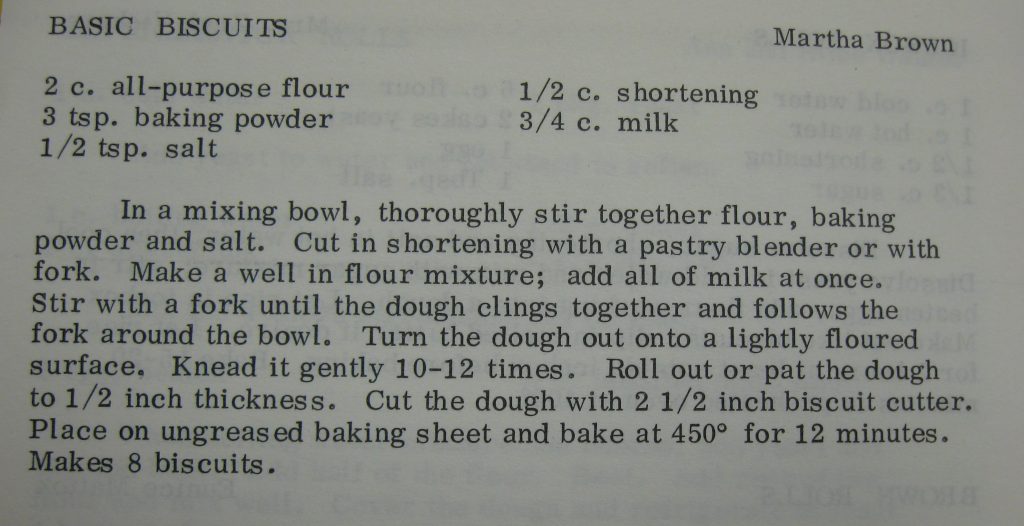 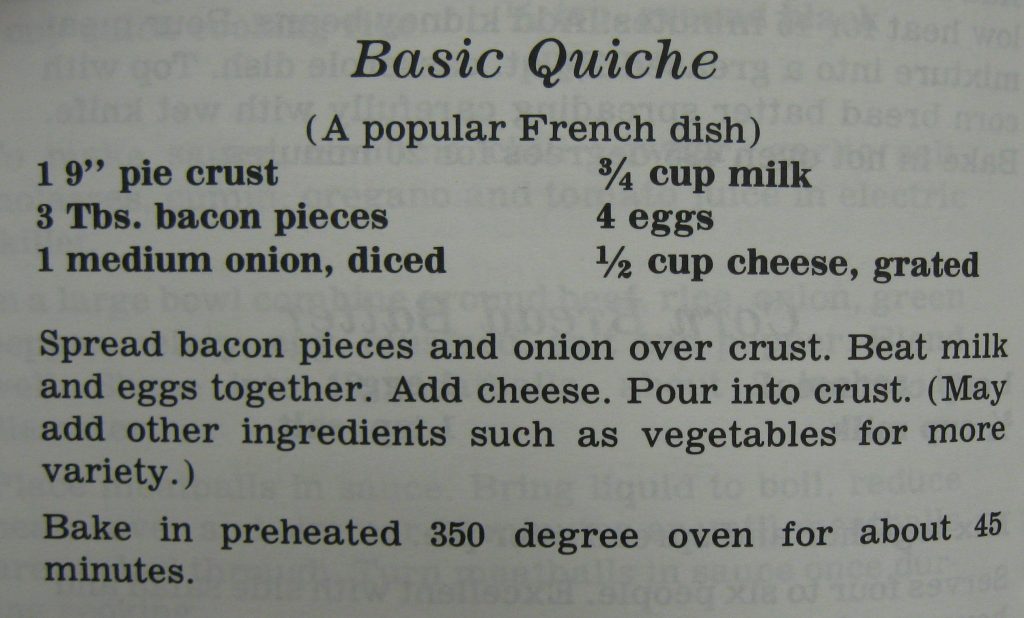 Basic Quiche from Just Like Grandma Used to Make. 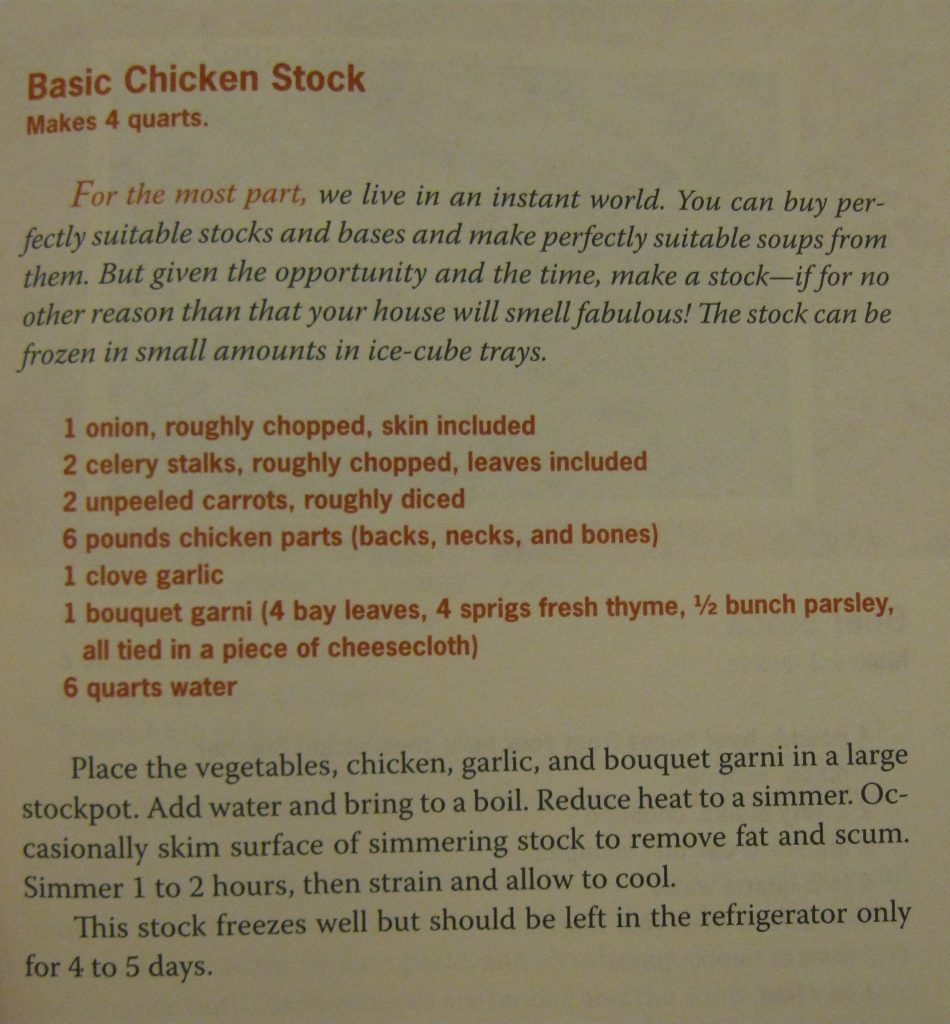 Today’s Google doodle commemorates the birthday of author and illustrator Edward Gorey. Gorey, whose odd but simple stories and gothic illustrations remain quite popular today, designed book covers early in his career. His iconic artworks grace the covers of a series of paperbacks published by Anchor Books. The wide-ranging series includes authors from Chaucer to Henry James to (perhaps more appropriately for Gorey) Franz Kafka, and features two late novels by Thomas Wolfe.

Fans of Gorey work will recognize his work on the covers of these editions of The Web and the Rock (Anchor, 1953) and You Can’t Go Home Again (Anchor, 1957). Both are from the Thomas Wolfe Collection in the North Carolina Collection. 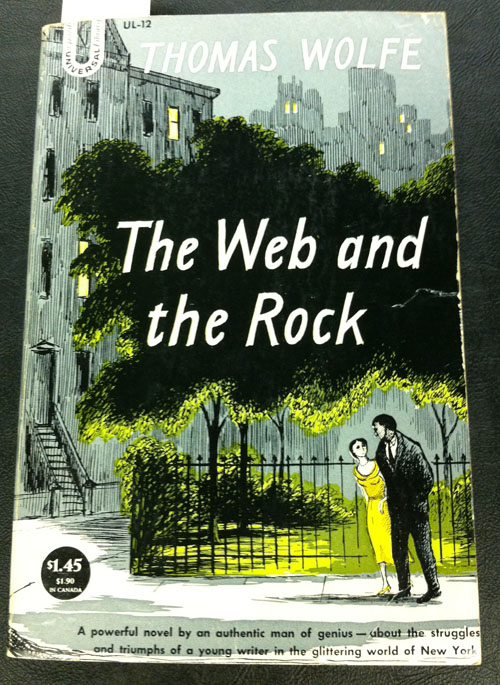 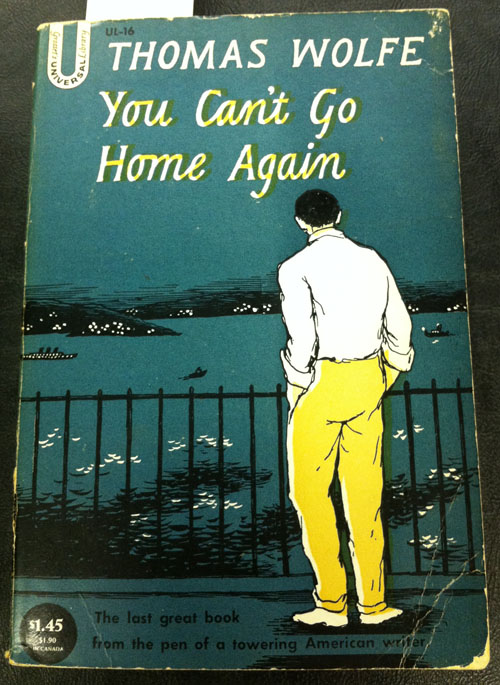 “In 1913, tobacco worker William Darnell, attempting to build a house on a corner lot at Eleventh Street and Highland Avenue, was arrested because he was black and all the other residents on the street were white. The legal case that ensued [challenging Winston-Salem’s residential segregation law]  speaks to the behind-the-scenes power of R.J.R. to override Jim Crow when it served the company’s own interests….

“When the jury returned a verdict of guilty, [Darnell’s R.J.R-allied lawyers] immediately appealed….  Although the law was clearly on the side of prosecutors, Supreme Court Chief Justice Walter Clark overruled the decision…  in an effort to encourage African Americans to stay in Winston [rather than seeking jobs in the North]… citing the Irish exodus from Great Britain and Jewish emigration from Russia….”

— From “Katharine and R. J. Reynolds: Partners of Fortune in the Making of the New South” by Michele Gillespie (2012)

“Many of the Civil War’s legendary charges in the face of the enemy were made by soldiers who had been drugged into near insensibility by the liberal dispensing of hard liquor….

“The 16th North Carolina went into action at Seven Pines [Henrico County, Virginia] after the company commissary ‘hobbled down with several canteens of “fire water” and gave each of the men a dram. He knew we needed it, and the  good angels only smiled.’ ”

— From “Fateful Lightning: A New History of the the Civil War and Reconstruction” by Allen C. Guelzo (2012)

Zealous, maniacal, obsessed, rabid. There’s a reason why writers describing Tar Heel fans proceed directly to the extreme corners of the English language. The UNC men’s basketball team has earned every bit of its fans’ devotion, though, with a storied history of dramatic wins.

The team has enjoyed no prouder moment than its 1957 season, known fondly as McGuire’s Miracle (a reference to Coach Frank McGuire). That year the Tar Heels completed a perfect season, culminating in its first NCAA national championship.

Our February Artifact of the Month celebrates that exhilarating season: 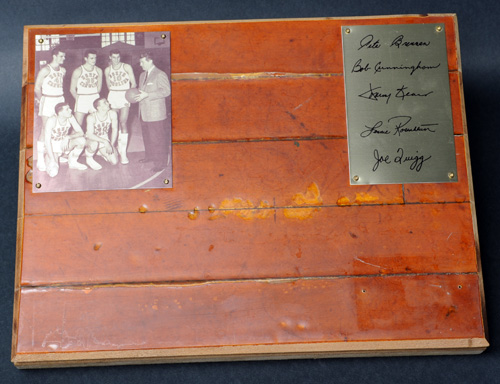 This section of maple floor was salvaged from Woollen Gymnasium, the home court of the Tar Heel team until 1965. Affixed to this section of the historic floor are two metal plates, one featuring a photo of the 1957 championship team with Coach McGuire, and one bearing the signatures of the starting players: Pete Brennan, Bob Cunningham, Tommy Kearns, Lennie Rosenbluth, and Joe Quigg.

Those stellar players, who practiced and played on the old Woollen Gymnasium floor, attended the 2004 grand opening of the newly renovated Woollen, where these floor sections were offered as a fundraiser.

Fortunately, the Tar Heels’ winning mojo seems to live in the team itself, and not in that old Woollen floor: The UNC men’s basketball team has gone on to rack up four more NCAA championships after that first miraculous season, trailing only two other Division I teams in number of titles won. And any fan will tell you they’re not done counting.

“Ross McElwee‘s ‘Sherman’s March’ forever altered my writing life. By being as self-reflexive as it is, a heat-seeking missile destroying whatever it touches, the film becomes a thoroughgoing exploration of the interconnections between desire, filmmaking, nuclear weaponry and war, rather than being about only General Sherman….

“…  The best nonfiction jumps the tracks, using its ‘subject’ as a Trojan horse to get at richer material than the writer originally intended. McElwee’s ‘Bright Leaves’ pretends to be about his conflicted relation to his family’s tobacco farm, whereas it’s really about the way in which we all will do anything — make a movie, smoke cigarettes, collect film stills, build a birdhouse, hold a lifelong torch for someone, find religion — to try to get beyond ourselves.”

Shields, whose latest has drawn reviews both appreciative and not so, may be an even bigger fan of the Charlotte-born McElwee than I am.  (“A heat-seeking missile destroying whatever it touches”? — can’t top that.)