It’s not often that a story about numismatics makes the front page of the News and Observer, but it happened recently in the article “Humble Nickel from 1913 Likely to Fetch Millions.”

What’s numismatics, you ask? You aren’t the only one! It’s the collecting and study of coins and other types of money. What’s so interesting about money, other than nagging questions about whether one has enough of it? The N & O article is about a “trophy” coin: rare and highly desired by collectors with deep — very deep — pockets. Part of the appeal of this 1913 nickel is the mystery of how it was produced, the story of the North Carolinian who once owned it and then lost it, and of course its very high value.

But many pieces of currency have interesting stories to tell. Did you know that during the Civil War the State of North Carolina produced hundreds of varieties of paper money, denominated from five cents through $100? These are not the better-known paper money issued by the Confederacy. Both Confederate and state currencies confusingly circulated together to provide North Carolinians a medium of exchange. But the effort was not entirely successful. The paper money had no intrinsic value and was subject to counterfeiting, inflation, and discounting.

One example of North Carolina’s Civil War paper money is almost as rare as the 1913 nickel, although it does not command anywhere near the price or attention.

During the Civil War paper and production resources were scarce in the South. Both were obtained by any means possible. In October 1861, the North Carolina Institution for the Education of the Deaf, Dumb, and Blind, located in Raleigh, was pressed into service to print money. They left their imprint, “N. C. Inst. Deaf & Dumb, Print.,” on one- and two-dollar notes. The one-dollar note is fairly common, but the two-dollar note is a rarity, with perhaps only fifteen surviving. Paper money in this era was usually printed on only one side, and the plain backs of uncurrent bank notes were used as the paper stock for the two-dollar notes. This is recycling as economic necessity. 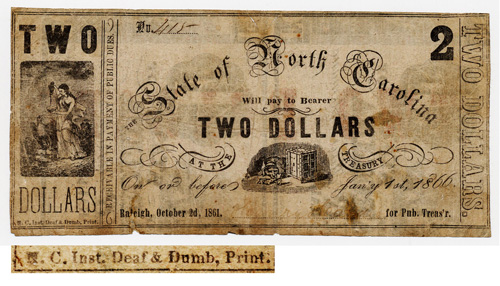 It’s just one of many interesting stories associated with North Carolina’s old money.