According to the magazine, “The world’s largest invitation-only academic opinion survey [is intended] to provide the definitive list of the top 100 most powerful global university brands…. The table is based on nothing more than subjective judgement — but it is the considered expert judgement of senior, published academics — the people best placed to know the most about excellence in our universities.”

Does anyone dispute that this decline in reputation is real?… Or that it is justified?

Green Punch from The Charlotte cookbook.

Top of the Morning Muffins from Pass the plate : the collection from Christ Church.

Whiskey Balls from Favorite recipes of the Lower Cape Fear.

Last month we did what so many do this time of year: We devoted our attention to college basketball.

This month we turn our focus to another group of athletic students who are equally agile but far too often unsung: cheerleaders. This month we bring you not just one but three artifacts, all of them from a UNC cheerleader who graduated in 1968. 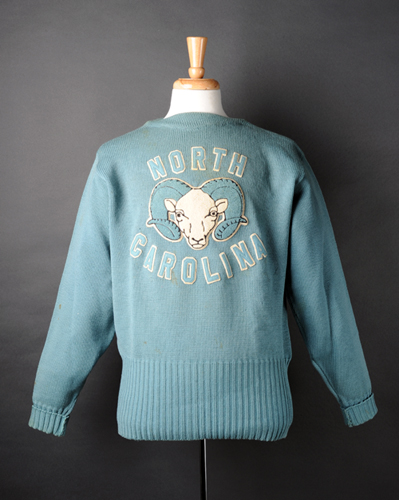 This sweater, a bit darker than the Carolina blue we see these days, features a very realistic-looking Rameses (the UNC mascot). 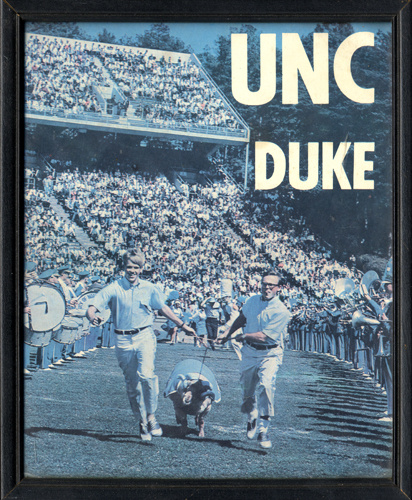 In this framed program from a UNC-Duke football game, two cheerleaders accompany the real live Rameses into the stadium. The cheerleader on the left is Jack Betts, the donor of these artifacts and the sweater’s former owner. Betts followed in the footsteps of his uncle Henry Betts, who had been a cheerleader at UNC in the early 1930s. 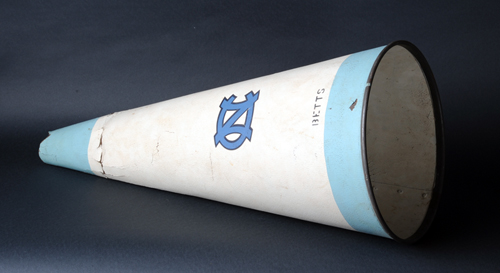 Our third artifact is this megaphone, which is about two-and-a-half feet long and, as the photo shows, in less-than-great shape. Betts explains that members of the squad would beat on their megaphones to generate noise during games — the reason for the wear and tear.

Jack Betts attended UNC from the fall of 1964 to the spring of 1968. He fondly recalls being a cheerleader during the time when the basketball team moved from the much-smaller Woollen Gymnasium to Carmichael Arena, which seated just over 8,000 people. The thrill of being right on the court, of watching the games from such a short distance, he says, was dizzying.

The staff of the NCC Gallery will never know the excitement of standing on the court during a nail-biting game. But as far as we’re concerned, the thrill of adding these great artifacts to our collection is excitement enough.

On this day in 1960: Sen. Sam Ervin explains to Sen. Everett Dirksen, R.-Ill., why he required more information on a point of floor debate: “I am unable to unscrew the inscrutable.”