“….In many ways Mississippi is the Ireland of America. It’s a green place where literature and music are valued more than acquiring wealth (perhaps because we’ve always been better at the former than the latter). Drinking and fighting are accepted and often respected social endeavors, and defending one’s honor is still considered worthy if not mandatory.”

“Kentucky has been sometimes called the Ireland of America. And I have no doubt that, if the emigration were reversed…  every American emigrant to Ireland would find, as every Irish emigrant here finds, a hearty welcome and a happy home.”

“People of every nation and prejudice met here [in Maryland]… This was the Ireland of America!

“From 1815 to 1835, North Carolina made such little economic and social progress that it was called the Rip Van Winkle of the states and the Ireland of America.”

— From “North Carolina: A Guide to the Old North State” by the Federal Writers Project (1939)

So many “Irelands of America”! But only for North Carolina does the label seem entirely negative.

“I came to Charlotte a day early to see old Charlotte. I wanted to see the original buildings, whether they’re 18th century or 19th century, whatever they are. Charlotte did, like so many towns, tear down its heritage and build modern skyscrapers. I didn’t go to any of them. I didn’t want to.”

A generation ago, I had the privilege of accompanying another famous architect on a walking tour of downtown Charlotte and filling my notebook with his memorably scornful observations. Newspaper reporting can be hard work, but on this occasion I had to provide no more than stenography.

“Early on during his Saturday night show at Durham Performing Arts Center, George Jones paused to offer up a bit of philosophy from The Gospel According to Jones. He allowed as to how he didn’t much care for ‘hot young country radio’ nowadays, especially the fact that it shies away from cheatin’ and drinkin’ songs. Surveying the crowd, he added the punchline with a standup-comic’s timing.

“Even though time and former vices have robbed Jones of most of his voice (he’ll turn 81 years old next month), he still has impeccable timing and a way with a one-liner. Not to mention fierce fashion sense, as evidenced by a dark plaid sharkskin jacket that appeared to date from the Carter administration.”

“After George Jones’ show Friday night, the Ovens Auditorium crowd would have been no less amazed if Muhammad Ali had tottered onstage and knocked out Mike Tyson.

“Stunningly, Jones proved that — even at age 64 — he is still one of the best singers on the planet. When he laid into one of his classic country ballads, people by the dozens bawled like they were watching the end of a two-hankie movie.

“Jones can’t run the long race anymore — he could only sing for eight or 10 minutes at a stretch. Every so often his band would play a fiddle tune while Jones caught his breath.

” ‘The Race Is On’ sent him from a deep bass to a high whine in the space of a chorus. ‘Bartender’s Blues’ (written by N.C. native James Taylor) forced him to bend nearly every line….

“But the 2,000 or so in the house — one of the most fired-up crowds I’ve seen at a country show — gave him a second wind. When it came time for ‘He Stopped Loving Her Today,’ one of the finest country songs ever written, Jones pushed on the ‘h’ in ‘her’ so hard you could feel your heart bruise.

“Within an hour he was off the stage. But on this night, an hour of George Jones was worth all the hats in Nashville.”

George Jones, 81, died today at a hospital in Nashville. His next performance in North Carolina had been scheduled for July 27 at Harrah’s Cherokee Casino.

“Is Andy Griffith our Robert Burns? One should argue Whitman or Poe, or even Frost, makes for a richer comparison. Certainly self-invented Whitman, who loved Burns, is the triumphant American version — yet the Whitman house in Camden, New Jersey, receives scant visitors. The same is true for Poe’s tidy home in Baltimore, now temporarily closed for lack of community support; and poor Frost’s New Hampshire farmhouse was vandalized and set aflame by a horde of drunken teenagers, who literally pissed on his stuff. Maybe these aren’t fair comparisons. But in the second half of the 20th century, television is popular culture.

“Perhaps whatever impulse propelled Keats in the 19th century — and Clark Gable, Irving Berlin, Joe Louis, and the Prince of Wales over a century later — to make a pilgrimage to the simple birthplace of poet Robert Burns, propels people to commune with the spirit of Andy Griffith in Mount Airy.

“The city earned over $100 million last year because people want to witness the place where this man came into being, and as any casual observer can discern from fans talking on the candlestick courthouse phone, they desire to exist inside his fiction.”

— From “Our Town: Andy Griffith and the Humor of Mourning”  by Evan Smith Rakoff” in the Los Angeles Review of Books (April 20, 2013)

“The University of North Carolina Extension Bulletin in 1925 published a booklet of historical pageants for youths, ‘Children of Old Carolina,’ by Ethel Theodora Rockwell. … Any elementary school in North Carolina was obliged to send $10 for each performance [it staged], while those outside North Carolina had to pay $25.

“The cast of ‘Children of Old Carolina’ include ‘colored’ characters played by children, presumably in blackface. When the character of a ‘negro boy,’ playing a lively tune on a banjo, enters, the ‘colored children carrying baskets and bags of cotton’ join him onstage singing, ‘Dis cott’n want a-pickin’ so bad’…

“The play encourages children to act out the revised history of an Old South populated by happy African American slaves who cannot wait to pick cotton.”

— From “Raising Racists: The Socialization of White Children in the Jim Crow South” by Kristina DuRocher (2011)

On this day in 1952: Collier’s magazine profiles Grady Cole as “Mr. Dixie.” Cole, a homespun announcer who wakes up the Piedmont every morning on WBT, has been Charlotte’s premier celebrity since 1929.

“Cole says he’s still not a professional radio man,” Collier’s notes. “But he snows under all rivals, and his droll news and weather reports bring him $100,000 a year.” His share of the Charlotte audience: 71 percent.

Gov. Kerr Scott is credited with the state’s massive rural road-building program in the early ’50s, but it was Cole who generated popular support with his long-running “Get Farmers Out of the Mud” campaign.

The North Carolina Collection Gallery proudly announces the launch of Carolina Keepsakes, a digital collection of some of the Gallery’s most interesting and significant items. 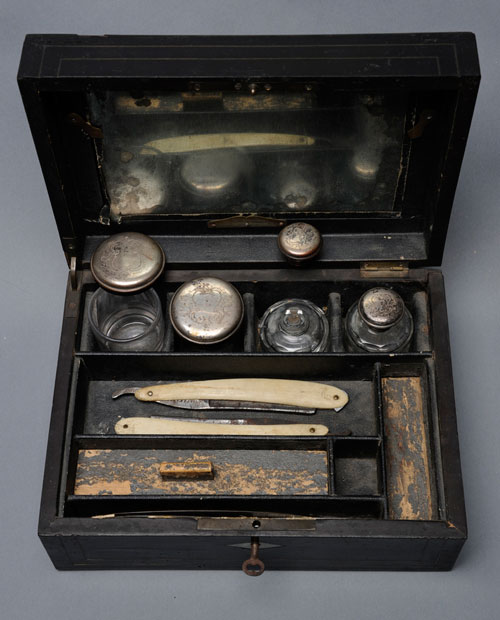 As the main photographer for this project, one of my favorite items is the shaving kit of David L. Swain, president of UNC and former governor of North Carolina.  This polished and engraved wooden box opens with a tiny key.  What must have been routine for Swain felt like opening a treasure chest to me.  You can see photographs of all the delicately crafted razors and glass jars nestled in their individual compartments.  One hollow spot in the box did not have a handle.  I thought I must have found a secret compartment!  I used a delicate tool to lift up the wooden piece, but, alas, there were no hidden messages or shaving secrets that had lay dormant for 145 years.

Another item I encourage you to view is the watercolor portrait on ivory of Chang and Eng Bunker.  The image has been reproduced many times, but never before has it been available in such a high-quality format.  We have two images online.  If you click on the thumbnail of the second image (without the frame) and use the slider to zoom in, you can see how the artist painted fine details in the eyes and hair.  This souvenir of the twin’s trip to Paris ca. 1835 is definitely a significant Carolina Keepsake.

We hope you enjoy browsing Carolina Keepsakes as much as we enjoyed working on it. 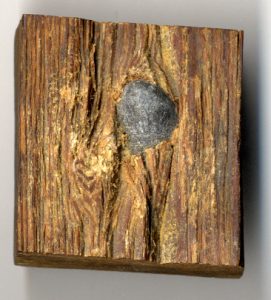 For decades, patriotic souvenir hunters have chipped away at Plymouth Rock and cut fragments from White House curtains. Less exuberant collectors satisfy themselves with the mass-produced trinkets available at historic sites. In a recent article on Smithsonian.com, curator Larry Bird attributes this behavior to our desire to “touch” the past by owning a piece of our nation’s history.

The “souvenir mania” he describes inspired us to look through the Gallery’s own collection of relics. One of these keepsakes is a rifle ball embedded in a piece of wood. Inscribed on the back of this piece is “Rifle Ball, Battle at Bentonville, the Last Battle of the War between the States.” This 2 x 2.25 inch fragment was taken from a structure at Bentonville Battlefield as a memento of North Carolina’s largest Civil War battle.

Some relics are associated with revered historical figures, such as this unassuming half-inch piece of fabric, a fragment of the braid from General Robert E. Lee’s dress uniform donated in 1930 to the Library by one of Lee’s cousins. 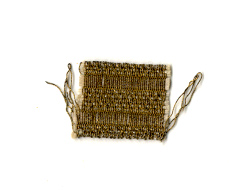 The Gallery holds a number of souvenirs and relics, and most of these are related to the Civil War. The collection of these is a testament to a universal human desire to connect with monumental events and historic personages of the past.

What relics or souvenirs have allowed you to touch the past? 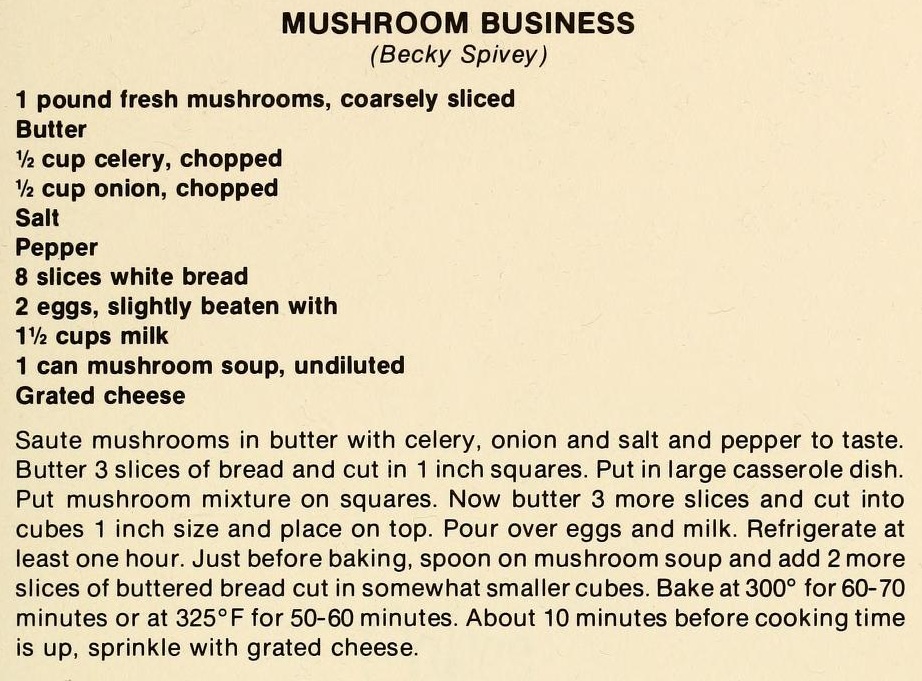 Sausage-Stuffed Mushrooms from Love yourself cookbook : easy recipes for one or two. 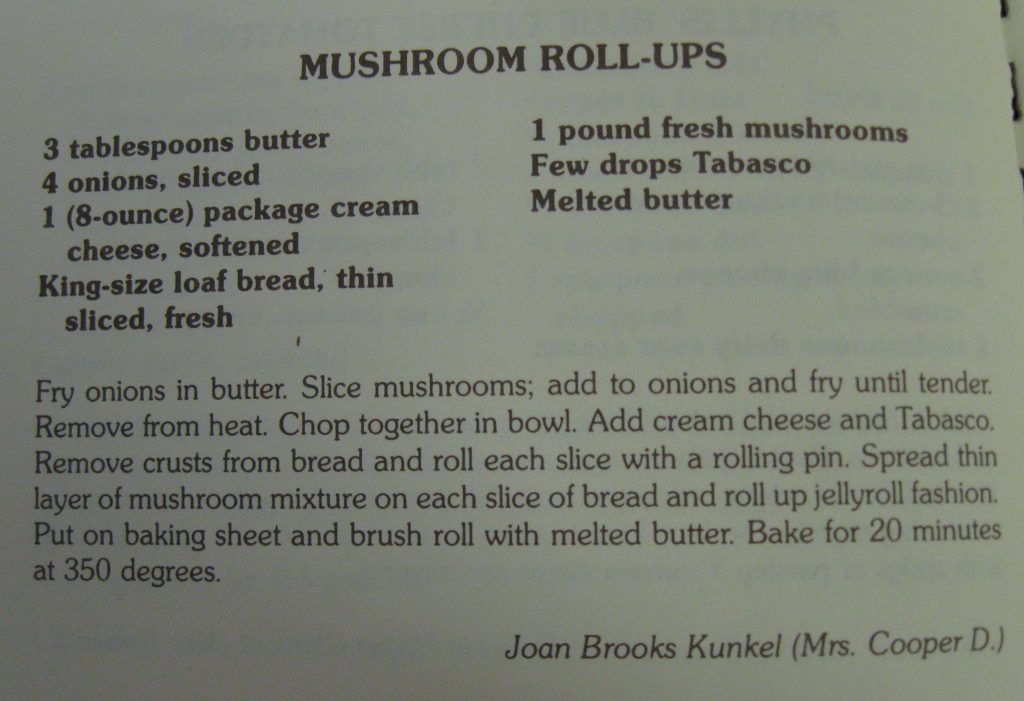 Mushroom Roll-Ups from Pass the plate : the collection from Christ Church.

Joanie’s Mushroom Sandwiches from What’s left is right : what to do with leftovers when you’re desperate.

Mushroom Casserole from A Taste of the old and the new.