— From “Where We Came From, State by State”  by Gregor Aisch, Robert Gebeloff and Kevin Quealy in the New York Times (Aug. 14)

For vivid validation of this phenomenon just check out the stands when the Bills, Jets or Giants visit Bank of America Stadium. 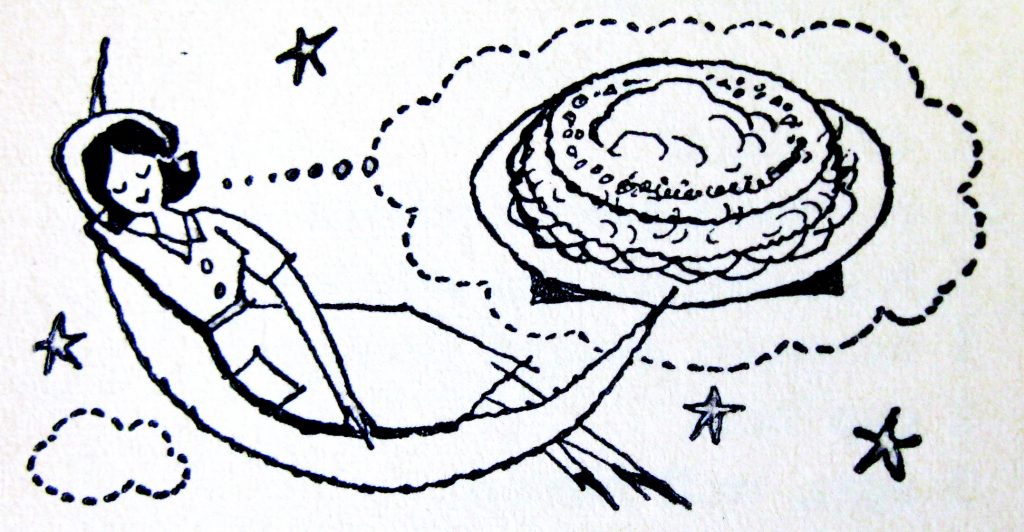 from The Progressive farmer’s southern cookbook

“Out of the World” Cake from Pass the plate : the collection from Christ Church.

Heavenly Food from Favorite recipes of the Lower Cape Fear.

Cinnamon Stars from A book of favorite recipes. 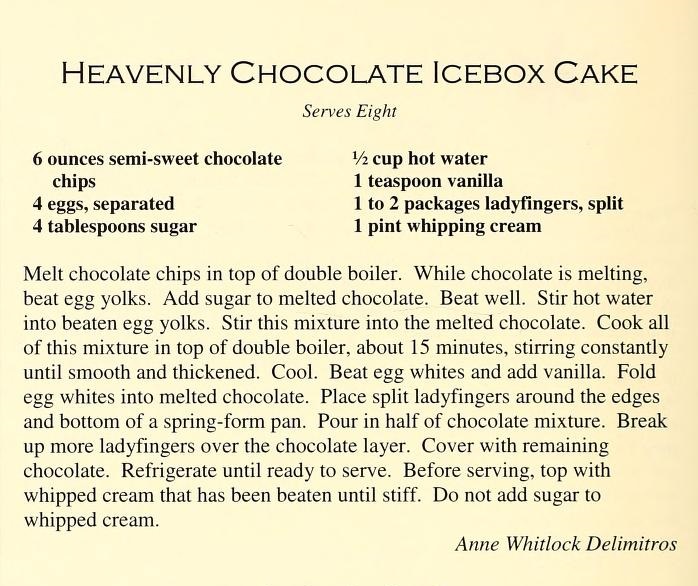 “Blowing Rock was a summer resort, and a rather posh one. Lured by the area’s beauty and cool summer air, wealthy families from throughout the Southeast maintained summer residences there. The Cannon textile barons had a huge estate, as did the R. J. Reynolds tobacco clan, and the Coca-Cola Snyders* from down in muggy Atlanta. Beginning in early June, our sidewalks sported pedestrians  in tennis whites and gold jewelry, our streets opened their asphalt arms to European sports cars and luxury sedans. There were boutiques with flagship stores in West Palm Beach and Boca Raton, a produce stand that displayed fruits (avocados, papayas, yellow plums) that no hillbilly could identify let along afford; and then there as the movie theater that showed first-run films as soon as they opened in Los Angeles and New York — until Labor Day Tuesday, that is, when it went as dark as the Tomb of the Unknown Gaffer.

“It was an annual occurrence. Come June, the merry masquerade began; come September, Appalachian reality settled upon the community with a mournful sigh. The shops were shuttered, golf courses deserted, the last fancy auto went Cadillacking down the mountain and out of town. Even the Lois XVI colors of the autumn leaves failed to paint over the detail that many residents would have to survive for nine months on what they’d earned in three. There would now be fatback suppers, rotgut hangovers, malnourished kids, flour-sack fashions, occasional stabbings; and always outbreaks of measles, whooping cough, scabies and head lice. And then… and then June would jack out of its box and life would get healthy and merry again.”

— From “Tibetan Peach Pie: A True Account of an Imaginative Life” by Tom Robbins (2014)

Robbins, who was born in Blowing Rock in 1932, is best known for novels such as “Another Roadside Attraction” and “Even Cowgirls Get the Blues.”

The Class of 2018 began its studies at the UNC School of Medicine earlier this month. The class of 180 doctors-to-be is 48 percent female. That’s a far cry from 100 years ago, when Cora Corpening became UNC-CH’s first female med student. According to Gladys Hall Coates’ Seventy-fifth anniversary of the coming of women to the University of North Carolina, the student body voted against admitting her to the school. But Corpening attended classes anyway. And after about a month, she was formally admitted. According to a profile of the Corpening family in the July 17, 1940 edition of The Robesonian, Corpening finished the two-year program at UNC in  spring of 1916 and then completed her medical studies at Tulane University, where she was one of the top students.  “After completing her medical course, she located at Suffolk, Va. and did the work formerly done by eight physicians during World war times,” The Robesonian reported. After serving at Lakeview Hospital in Suffolk, Corpening moved to Virginia Beach, where she worked in private practice. She died in 1984.

“The next drive-in to come to Tunnel Road was Wink’s, which had a radio tower and disk jockey perched on the roof during peak cruising hours. The DJ, writes [Rick McDaniel, author of  Asheville Food: A History of High Country Cuisine], ‘would lower a peach basket on a rope down to would-be Romeos, who would send up their requests for songs to be dedicated over the air to their sweeties below’….

“On the other side of the Tunnel was the third drive-in, Babe Malloy’s. ‘The Big Three’ created somewhat of a ‘cruising circuit,’ said McDaniel. ‘All the kids made a loop around the three to see who was at which one.

” ‘The Big Three lasted from the 1950s to about 1975. Back then, you didn’t have a McDonald’s every 5 feet…. Eventually all of the fast food places started popping up, and it drove the traditional drive-ins out of business because of advertising — kids wanted to eat what they saw on TV.”

On this day in 1955: Over statewide radio and television, Gov. Luther Hodges gives North Carolina’s response to the landmark Brown vs. Board of Education decision.

Hodges argues that the Supreme Court has outlawed only forced segregation of schools and asks that blacks now send their children to black schools voluntarily. If they don’t, he warns, the state might abandon public education altogether.

“I love that you said ‘Scotch-Irish’ instead of this new term ‘Scots-Irish’ that you hear….”

I was surprised to hear “Scots-Irish” described as the newer usage, but sure enough….