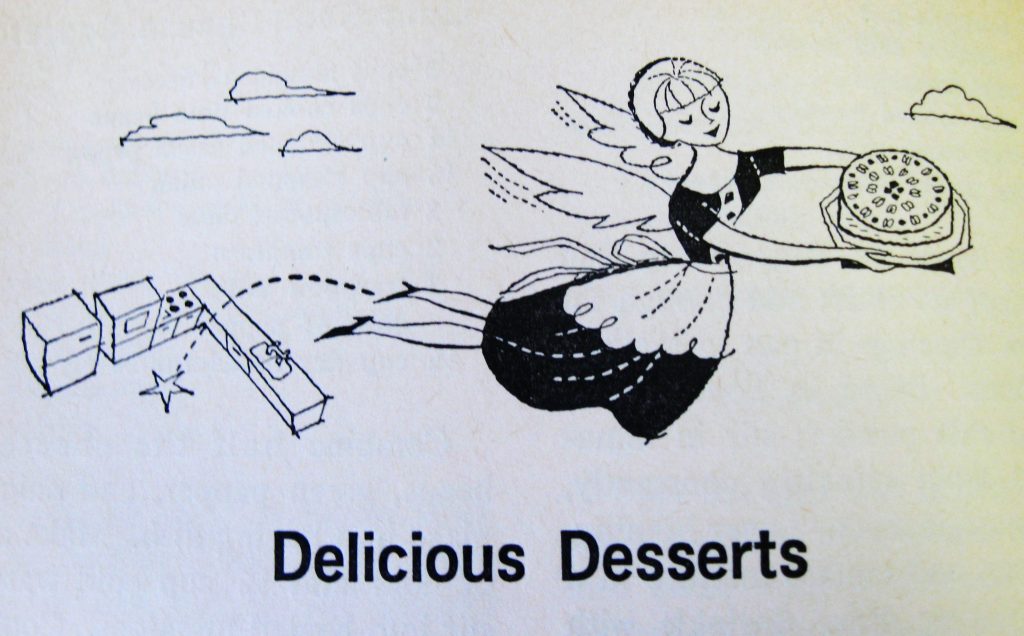 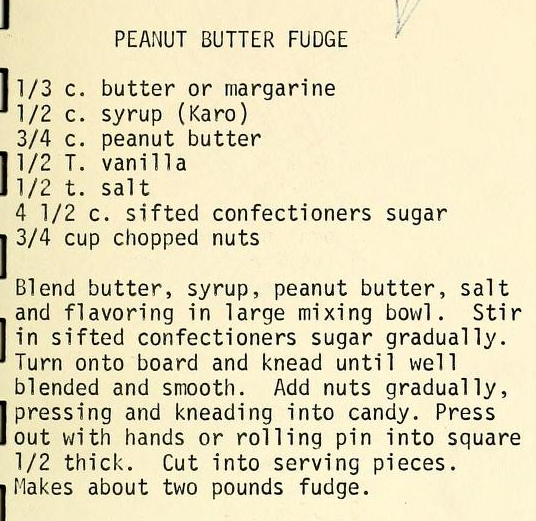 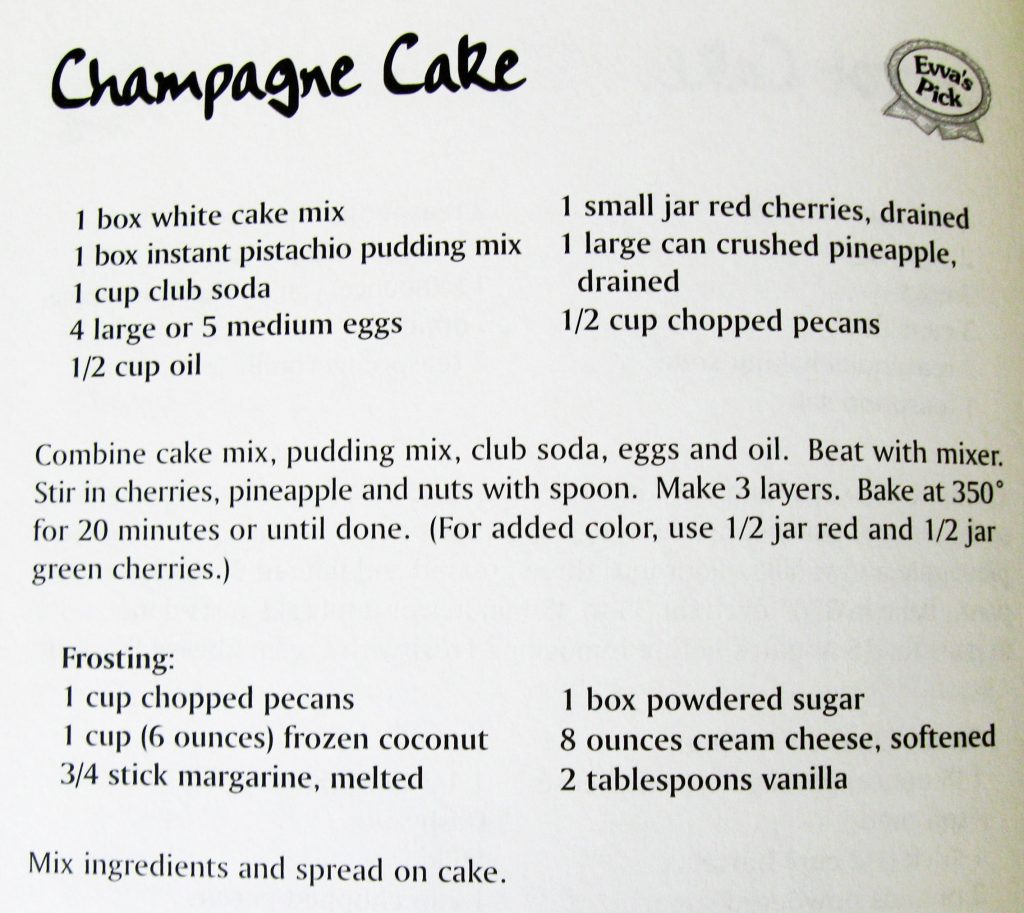 Champagne Cake from Supper’s at six and we’re not waiting!

Hazelnut Meringue Shells with Chocolate Ice Cream and Raspberry Sauce from The Fearrington House cookbook : a celebration of food, flowers, and herbs. 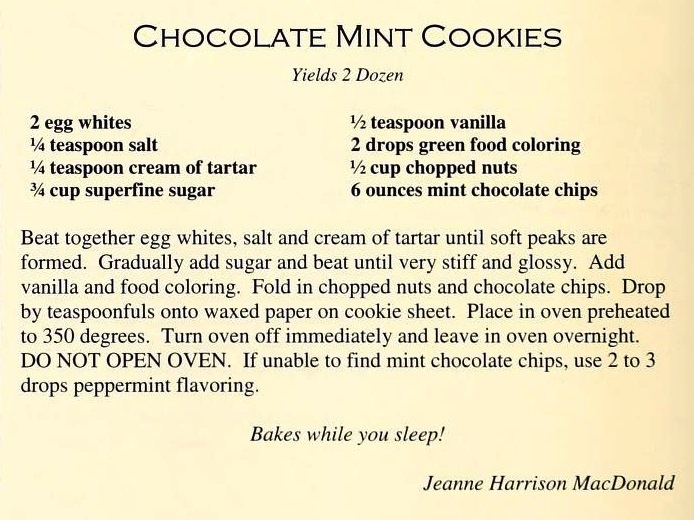 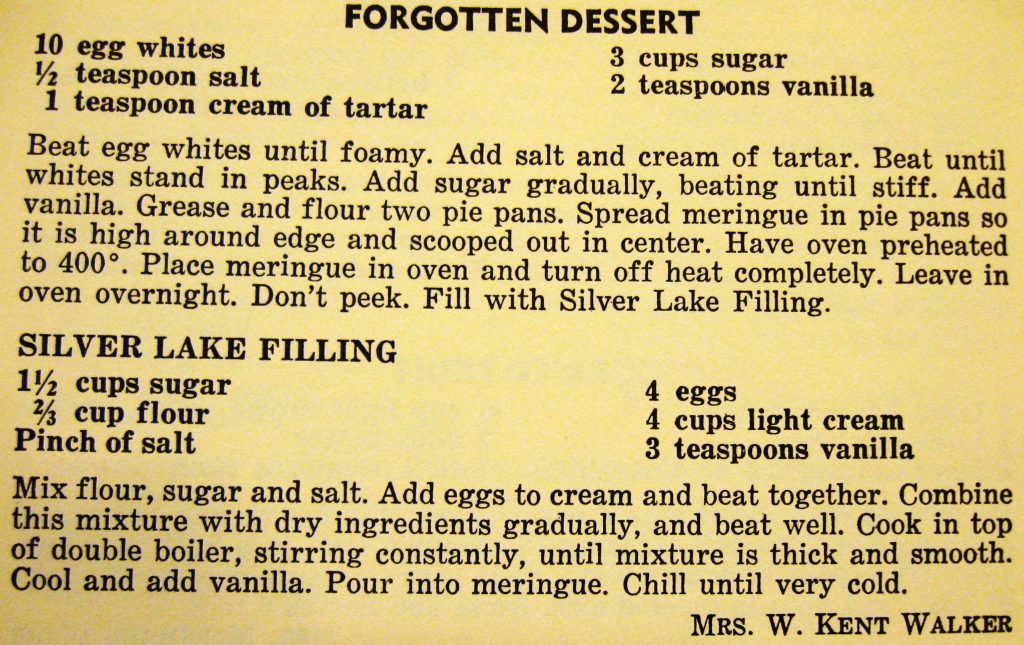 Forgotten Dessert from The Charlotte cookbook. 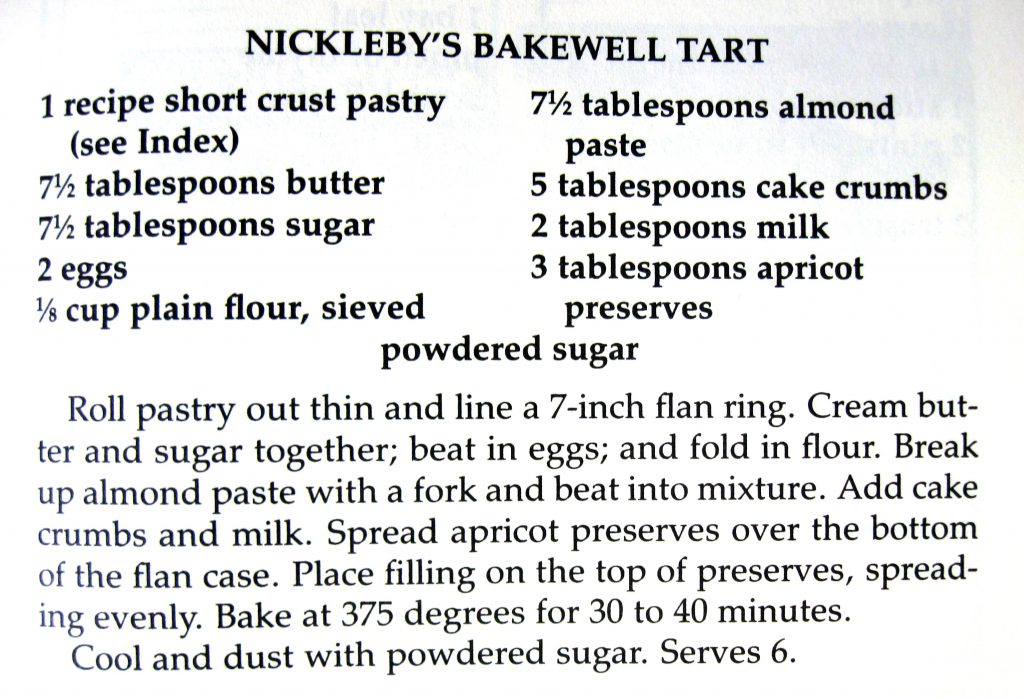 On this day in 1941: After appearing at Raleigh’s State Theatre in the stage version of “The Philadelphia Story,” Katharine Hepburn attends a cast party at the Executive Mansion hosted by Gov. and Mrs. J. Melville Broughton.

“Miss Hepburn wore a mink coat over tan gabardine slacks and jacket, with white blouse of crepe silk and brown suede shoes with crepe rubber soles,” reports the News & Observer. “Her informal attire and equally informal manner put at ease all her admirers.”

The accompanying photo shows her enjoying a smoke while conversing with the Broughtons.

Hepburn, 33, tells reporters she hasn’t seen enough of North Carolina to form an opinion, “But the beds in the hotel are nice.”

“Susan Herman, president of the ACLU, said the first instance she knows of when prominent politicians used pocket Constitutions for effect was during the Watergate hearings. Sen. Sam Ervin, a North Carolina Democrat, chaired the Senate Select Committee to Investigate Campaign Practices—also known as the Watergate Committee (or even the Ervin Committee)—and the hearings were televised. Ervin used to pull out his pocket copy of the Constitution during the hearings, and it made a powerful visual impact.

–From “The History of the Pocket Constitution: How mini-Constitutions became popular long before the Tea Party” by Betsy Woodruff at Slate (Jan. 28) 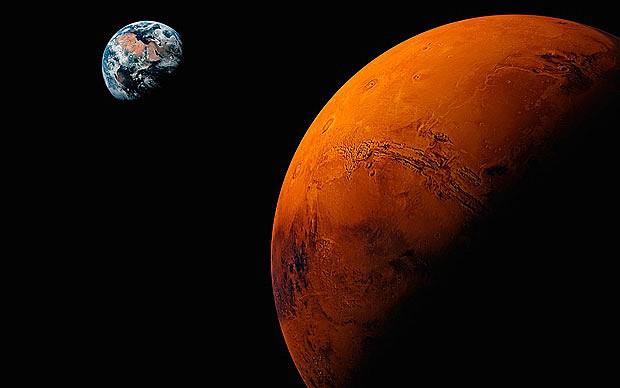 As we await tonight’s approach of asteroid 2004 BL86, the August 3, 1899 issue of the Caucasian recalls the discovery of the first documented near-earth asteroid, Eros, in 1898. It also outlines one 19th-century astronomer’s argument that Mars is an asteroid, not a planet.

“Don’t feel bad, Gastonia. Every town has a little sister to pick on.

“In Raleigh they poke fun at….”

— From “Does Gaston County have an image problem?” by Adam Orr in the Gaston Gazette, Jan. 24 (h/t, John L. Robinson)

“A North Carolina case in 1822 provided a typical example [of Southern] women’s powerlessness before the bench….The husband had not only contracted venereal disease from a prostitute, but also had transmitted the illness to his wife.

“The high court refused to grant the wife a divorce. Only when a ‘husband abandons his family, or turns his wife out of doors, or by cruel and barbarous treatment endangers her life’ was the state authorized to intervene, ruled the justices. In this instance, they could find no evidence that the husband had done anything hurtful, and therefore his misdeeds — appropriately deplored — were not covered by ‘positive law.’ Besides, upon learning of the his wife’s illness he had commendably ‘expressed his sorrow in tones of unfeigned remorse.’

“Enjoining friends of the alienated couple to bend all efforts toward their reconciliation, the court censured ‘her relations’ … for fomenting a separation ‘which might have been avoided’ but for their ‘whispers’ and ‘intrusion.’ ”

–– From “Southern Honor: Ethics and Behavior in the Old South” by Bertram Wyatt-Brown (2007)

In honor of the polar vortex that left us shivering and the chilly days to come, the North Carolina Collection Gallery has been looking for a way to enjoy a winter wonderland without having to bundle up in blankets and coats. Our solution? We present to you January’s Artifact of the Month: an assortment of winter-themed advertising cards. 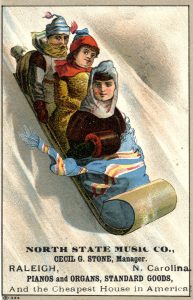 Although many of us have seen our share of postcards and notes (let alone text messages and tweets), few have ever received cards like these in the mail. Almost from the moment people realized the ease and accessibility of postcards, companies began to see them as a quick and cheap way to send their holiday cheer (and shopping tips) across the nation. 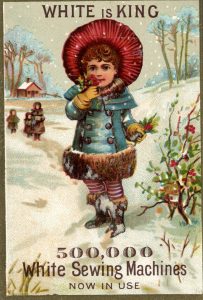 Picture post cards began to be mass developed in 1870 in Europe, but it wasn’t until 1897 that commercial companies were allowed to print their own cards.
And so began the day of the advertising cards… back when junk mail still had some class. 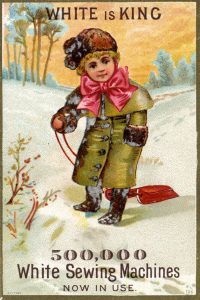 From the idyllic to the iconic to the downright idiotic, the North Carolina Collection has collected dozens/hundreds of these fascinating cards — not only winter wonderland scenes, but bear hunts gone awry, warnings about ingesting worms, picture games, and miracle tonics that could make your hair soft, complexion bright, and maybe your head spin.​

“In the late ’60s, I had a high-school English teacher who was, shall we say, getting on in years, and she kept paintings of [Robert E.] Lee and Stonewall Jackson hanging on the wall of her classroom. What’s interesting about this is that the high school where she taught [R. J. Reynolds High in Winston-Salem] was the most successfully integrated institution I have ever known. Because the high school was located in the geographical center of the city, the student body was made up of black and white, rich and poor and middle-class kids. Because the Methodist orphanage was located across the road from the school, we even had orphans.

“It was a true cross section of society, but somehow everyone co-existed amicably, or the students did, at least. The administration and much of the faculty, especially the older teachers, seemed to view integration more grudgingly, as though it were a trick played on them. Historically speaking, of course, their behavior was unexceptional.

“Until the ’60s, our city had been two societies, one black and one white. I grew up with color-coded water fountains, a black balcony at the movie theater, and neighborhoods clearly segregated by race. African-Americans had their own cab and bus services. Before school integration, the only major social event in which both blacks and whites participated equally was the city’s Christmas parade, and even then there was no mingling. Black high school bands marched separately from white school bands.

“The Civil Rights movement changed a lot of that, thanks to the guts and determination of people like Dr. King. I seriously doubt that any teacher in any school in my hometown today has a picture of Robert E. Lee on the wall of her classroom.

“That said, I’m sure there are still teachers who would put up a portrait of Lee if they thought they could get away with it….”

— From “On MLK Day, Two Versions Of The South Collide” by Malcolm Jones at the Daily Beast (Jan. 19)

On this day in 1983: The first hominid in outer space, the chimpanzee Ham, dies at age 26 at the North Carolina Zoo. Although he lived the past two years at the zoo, his remains will be buried at the International Space Hall of Fame in Alamagordo, N.M.

Ham’s 1958 flight from Cape Canaveral aboard a Mercury-Redstone rocket lasted 16 minutes, 39 seconds, and paved the way for the launch of America’s first human astronaut, Alan Shepard, in 1961.