“Whatever its origin, the phrase soon became ubiquitous…. By 1853, the New York Times could observe that ‘the underground railroad’ had ‘come into very general use to describe the organized arrangements made in various sections of the country, to aid fugitives from slavery.’

“That same year, a North Carolina newspaper [the Raleigh Daily Register] offered its own definition: ‘An association of abolitionists whose first business is to steal, or cause to be stolen, seduced or inveighed…. slaves from southern plantations…. to steal [a slave] from an indulgent and provident master, to carry him to a cold, strange, and uncongenial country, and there leave him… to starve, freeze and die, in glorious freedom.’ ”

— From “Gateway to Freedom: The Hidden History of the Underground Railroad” by Eric Foner (2015)

With each batch of scanned newspapers, we also submit a history of that paper. We drafted them with help from our colleagues in the Office of Archives and History’s research branch. Some of those histories are already posted to Chronicling America. But, as a special service to North Carolina Miscellany readers, we also plan to post them here periodically.

Our first is below.

The casual observer might conclude that the Cherokee Scout is affiliated with the Eastern Band of Cherokee Indians. This is not the case. Rather, the newspaper serves readers in Cherokee County, from its seat at Murphy, described in its pages as “this pretty town of ours—a city in miniature—situated most delightfully amid the mountains of North Carolina.”

Eugene F. Case (1844-1915), editor and co-owner of the Pierce County Herald  in Ellsworth, Wisconsin, bought the Murphy Advance in 1890 and changed its name to the Cherokee Scout. Case sold the paper six months later to Dr. John William Patton (1828-1902) and John Stanley Meroney (1832-1909), Patton’s brother-in-law, and returned to the Midwest, where he eventually became the longtime editor and publisher of the Watervliet Record  in Michigan. Early issues of the Cherokee Scout are few and scattered, and the only one marking Case’s ownership of the paper lists his name as F.E. Case.

Patton, the first doctor in Cherokee County, appears to have served as co-publisher only briefly. His name had disappeared from the masthead by November 10, 1891. By contrast with Patton, Meroney had little formal education. His family was among the first non-Indian settlers in the town. They had arrived in 1839, shortly after the federal government’s forced removal of the Cherokee Indians from the area. Meroney shared the masthead with Alonzo Don Towns (1866-1913), a native of Albany, Georgia, who had worked at the Daily News and Advertiser in his hometown and the Murphy Bulletin prior to joining the Cherokee Scout under Case’s ownership.

The early days of the partnership between Meroney and Towns may have proved tumultuous. Towns’s wife died in November 1891 and left him with a baby. Six months later Towns married Meroney’s daughter, Alice. As reported in several newspapers, including the Atlanta Constitution  and the Asheville Daily Citizen, Meroney had refused to consent to his daughter’s marriage and ordered Towns to keep away from her. Towns, in turn, returned to Albany, Georgia, where he resumed his duties with the News and Advertiser. But, in April 1892, he headed back to Murphy, visited Alice Meroney, and the two eloped. Towns’s death proved equally noteworthy. He was found dead in his office on December 13, 1913, having killed himself by drinking carbolic acid.

On January 16, 1914, the Jackson County Journal, in Sylva, North Carolina, announced that Tate Powell had assumed editorship of the Cherokee Scout. Powell served as editor and publisher of the paper until November 1917, when he sold the Scout to George Otto Mercer, a resident of Asheville, who had previously edited the Mebane Leader in North Carolina and the Camas Post in Washington.

Crop reports, sermons, humor, and poetry could be found regularly in the Scout. Unusual among North Carolina newspapers, but reflecting the paper’s proximity to the “Peach State,” was the presence of news from Georgia, including market prices in Atlanta. The social notes common in newspapers of the era, indicating who was visiting or sick or out of town, appeared under the heading “Some Scoutlets.” In a typical issue of the Scout, business cards occupied the left column on the front page; advertisements for patent medicines such as “Lydia E. Pinkham’s Vegetable Compound” and railroad excursions via Southern Railway to exotic points in the western United States filled the remainder of the pages. In 1917, schools, including Brevard Institute, the North Carolina State College of Agriculture and Engineering, and the University of North Carolina Law School, took out ads in the Scout.

Today the Cherokee Scout  is owned by Community Newspapers, Inc., and remains a weekly, published on Wednesdays. Its readership is 9,600.

“The creation of the ‘modern university’ dates back to the early 1900s when American professors fashioned for their institutions a mission of social service and defined themselves as truth-seekers whose expertise would bring social benefits.

“These academics also introduced a new idea to the American public: academic freedom. In 1925, University of North Carolina President Harry Woodburn Chase proclaimed, ‘What the university believes with all its heart, is that a teacher has a right to state the honest conviction to which he has come through his work, that he has the right of freedom of speech in teaching just as any other citizen has that right under the Constitution.’ ”

— From “The New Southern University: Academic Freedom and Liberalism at UNC” by Charles J. Holden (2012)

“Immersed in silent film that depicts everyday folks in rural, 1930s North Carolina, South Carolina and Virginia, I realized that young people back then looked pretty much the same as the adults … only smaller.

“Take the 13-minute clip from Clayton, N.C., filmed circa 1936-1937. Like the older men in the movie, little boys mostly wore long pants and shirts that buttoned all the way to the throat. Like the older women, little girls mostly wore modest blouses and matronly overcoats. Boys flashed sly smiles like their fathers; girls showed on-camera reticence like their mothers. Teenage-looking guys played basketball in long pants and ties. Teenage-looking girls rollerskated in long dresses….

“There is in the film little sense of a childhood as we know it today. The clip is representative of the hundreds of hours of footage shot by North Carolina photographer Herbert Lee Waters and recently digitized and released by Duke University Libraries.

“When did America begin allowing children to have a childhood?…”

— From “Back Before Children Looked Childish” by Linton Weeks at NPR (Feb. 19)

“When Oklahoma state Rep. Dan Fisher (R) first introduced his bill to eliminate funding for AP U.S. History in Oklahoma, he included the Mecklenburg Declaration among documents of  ‘historical significance’ that students must read in American History class.

“The document is not listed in the version of the bill approved by the Oklahoma House Common Education Committee on Monday, perhaps because historians dispute the document’s origins….”

On this day in 1949: In one of a series of color advertisements on the back cover of The New Yorker magazine pairing a Hollywood star with a North Carolina tobacco grower, actress Joan Fontaine says, “In my home, guests always insist on Chesterfields because they’re so MILD,” while farmer Van W. Daniel of Ruffin says, “Chesterfield buys the best sweet, MILD cigarette tobacco. I have been a steady Chesterfield smoker for over 30 years.”

“After the enormous success of [“The Birth of a Nation”], Thomas Dixon, who’d already made several fortunes on his writing and speaking, turned movie producer and kept making money. But he lost everything in the economic crash of 1929, and in the 1930s spent his waning years working as a clerk of court in Raleigh. [John Hope] Franklin, then doing research for his first book, would see him in front of the courthouse and engage him in pleasant conversations that he recalled to me fondly — an image of how Southern cordiality can make intimates of even the starkest intellectual opponents….”

— From “Why No One Is Celebrating the 100th Anniversary of the Feature Film” by  Godfrey Cheshire at Vulture (Feb. 6)

“In one of his more notable generosities back in Washington [as editor of the City Paper], he purchased copies of Joseph Mitchell’s ‘Up in the Old Hotel’ for the entire staff. He signed mine, ‘To Jelani, This will show you the way.’ Not quite. That was a distinction that belonged largely to him.”

Coincidentally, the New Yorker this week published the last fragment of Mitchell’s never-finished memoir, in which he reflects on “a hodgepodge of pasts,” including “the past of a small farming town geographically misnamed Fairmont down in the cypress swamps and black gum bottoms and wild magnolia bays of southeastern North Carolina, a town in which I grew up and from which I fled as soon as I could but which I go back to as often as I can and have for years and for which even at this late date I am now and then all of a sudden and for no conscious reason at all heart-wrenchingly homesick….”

An informal poll of North Carolina Collection employees suggests that some of us are true hearts-and-flowers romantics on Valentine’s Day, and some of us approach the day like scrooges.

Regardless of how you plan to spend Valentine’s Day, we hope you’ll enjoy this pressed flower picture from 1882 — our February Artifact of the Month. 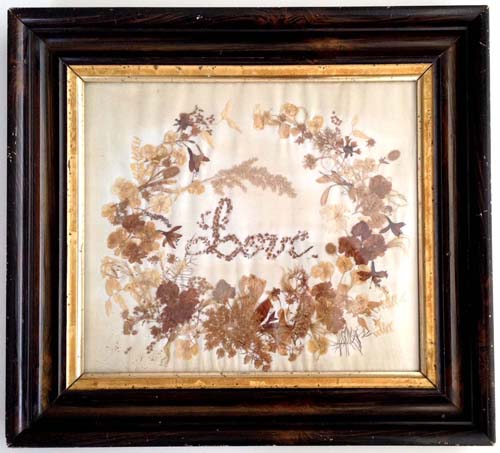 Pressing flowers was a popular pastime for women in the 19th century, particularly as a way of marking sentimental occasions.

This picture was made by Ella Williams Graves Thompson of Caswell County, soon after marrying George Nicholas Thompson (whose papers are in the Southern Historical Collection) in January 1882. A note accompanying the picture, written by Thompson’s daughter, reads:

Mama gathered and pressed these flowers the first year of her married life, and made the picture the last few months before Graves [Thompson’s son Azariah Graves Thompson] was born. The picture belongs to Graves. In it are woven all her hopes and prayers for her firstborn son. She meant it always to represent that to him.

So, all you Valentine’s scrooges: If that didn’t warm your heart just a little, what will?