“[Southern] towns prided themselves on their new water works and sewers….When a new water system came to Salisbury, North Carolina, in the late [1880s], Hope Chamberlain recalled, ‘Some of the younger married folks put in bathrooms. We girls called them “The Bath-Tub Aristocracy.” ‘ Those ‘aristocrats’ mentioned their new conveniences as often as possible, deeply irritating those ‘who had not yet graduated from the class with the tin-tub-on-the-back-fence, to be brought in with cold water and warm, in pails for the semi-weekly rite.’ ”

— From “The Promise of the New South: Life After Reconstruction“ by Edward L. Ayers (2007)

The namesake of Mount Mitchell was Dr. Elisha Mitchell. Dr. Mitchell, a science professor at UNC, measured elevations of the Black Mountain region until he met an untimely and unfortunate death after falling off a cliff over a large waterfall. Mitchell is buried on the summit of the mountain. Mount Mitchell is the highest point east of the Mississippi River. The second highest point, Mount Craig, was named in honor of Governor Craig. Read more about North Carolina’s first state park in Chronicling America and on the website of the N.C. Department of Parks and Recreation. Additional information about North Carolina woodlands is available from The Forest History Society.

“In the summer of 1877, Mark Twain became fascinated by the case of a real life Flying Dutchman, a Bermuda-based schooner seen drifting helplessly, seaweed-encrusted and sails drooping, in the Gulf Stream waters off Cape Fear, North Carolina. The Jonas Smith had been sold piecemeal for scrap and then taken out to sea one last time by her owner. No one knew what had become of the captain or her 13-man crew, said to be bound for Savannah, Georgia.

“The ship’s star-crossed journey set Twain to thinking about his own life of travel. ‘I have heard of a good many dismal pleasure trips, but this case leads the list,’ he wrote to the editor of the hometown Hartford Courant. ‘And if ever the tired old tramp is found, I should like to be there to see him in his sorrowful  rags & his venerable beard of grass and seaweed, & hear those ancient mariners tell the story of their mysterious wanderings through he solemn solitudes of the ocean….’ ”

In 1929, Henry Owl, a member of the Eastern Band of Cherokee Indians, became the first American Indian to graduate from the University of North Carolina.

Owl received a master’s degree in history with a thesis called “The Eastern Band of Cherokee Indians Before and After the Removal.” A year later, officials in Western North Carolina denied voting rights to Cherokees on the supposed basis of illiteracy. Owl pointed to his thesis as evidence to the contrary.

When officials pivoted and barred Cherokees from voting because they were not U.S. citizens, Owl testified before Congress. The federal government passed a law guaranteeing Cherokee suffrage — although Cherokees didn’t vote in North Carolina until after World War II.

Because of his achievements, Henry Owl’s name has been immortalized in the Virtual Museum of UNC History, the Sports Hall of Fame at Lenoir-Rhyne University (his undergraduate institution), and an endowed scholarship for UNC students.

It has not been immortalized in Wikipedia… at least, not yet.

On April 1, we hope to change that.

Everyone is welcome, even if you’ve never edited Wikipedia before. Staff will be on hand to help with Wikipedia edits and find books and articles on topics that interest you. A list of suggested topics, and additional details, can be found on the event meet-up page.

Please bring a laptop if possible.

Cookbooks aren’t just for recipes.  You can find all sorts of helpful hints and household tricks but also diagrams and instructions on how to set your table for any affair. 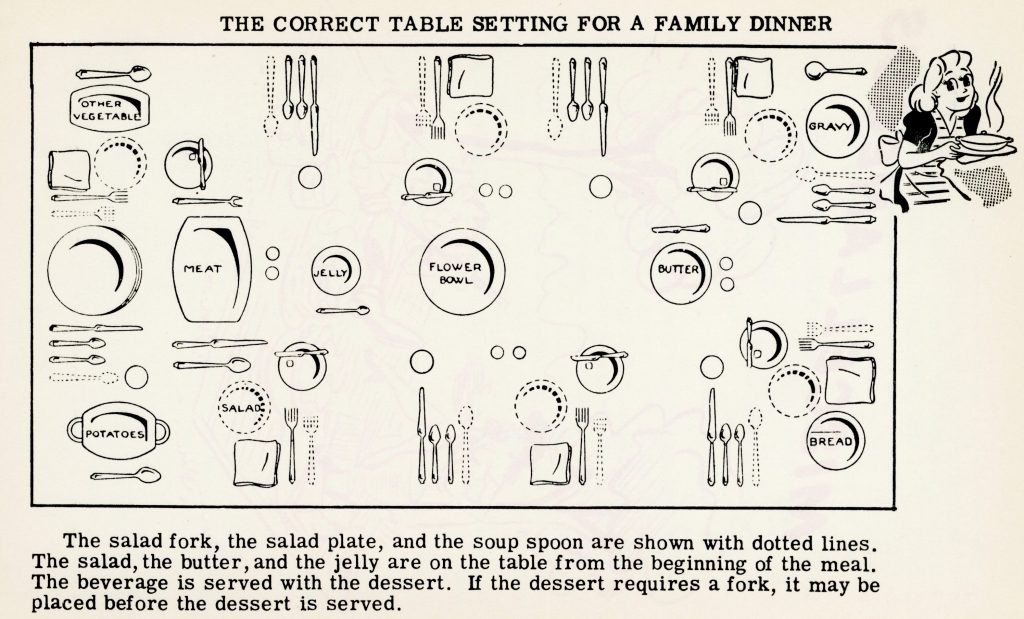 The Correct Table Setting for a Family Dinner from Kitchen kapers. 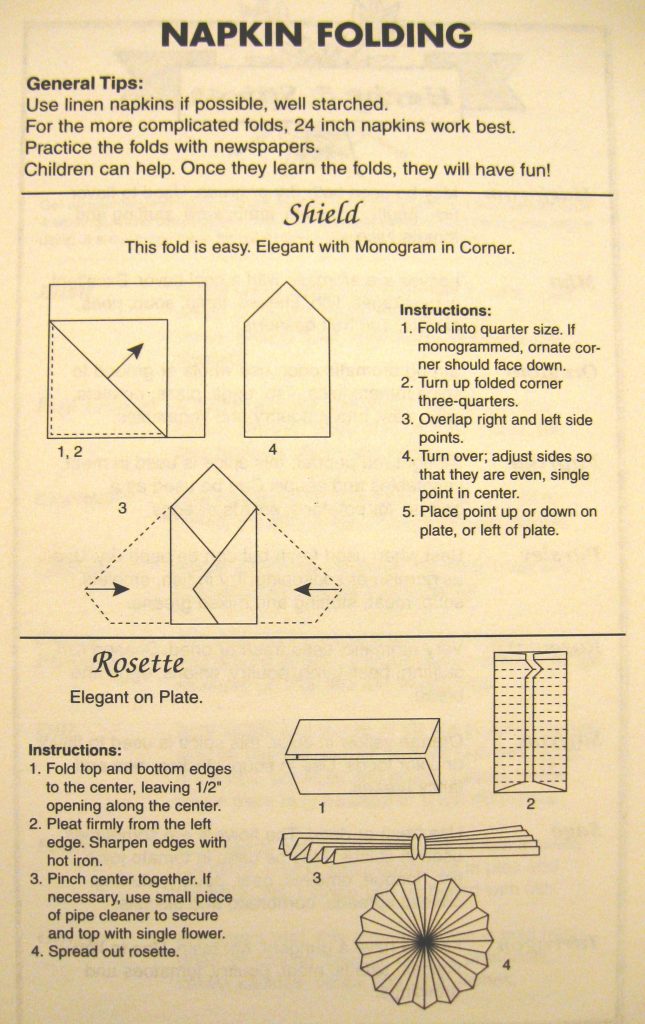 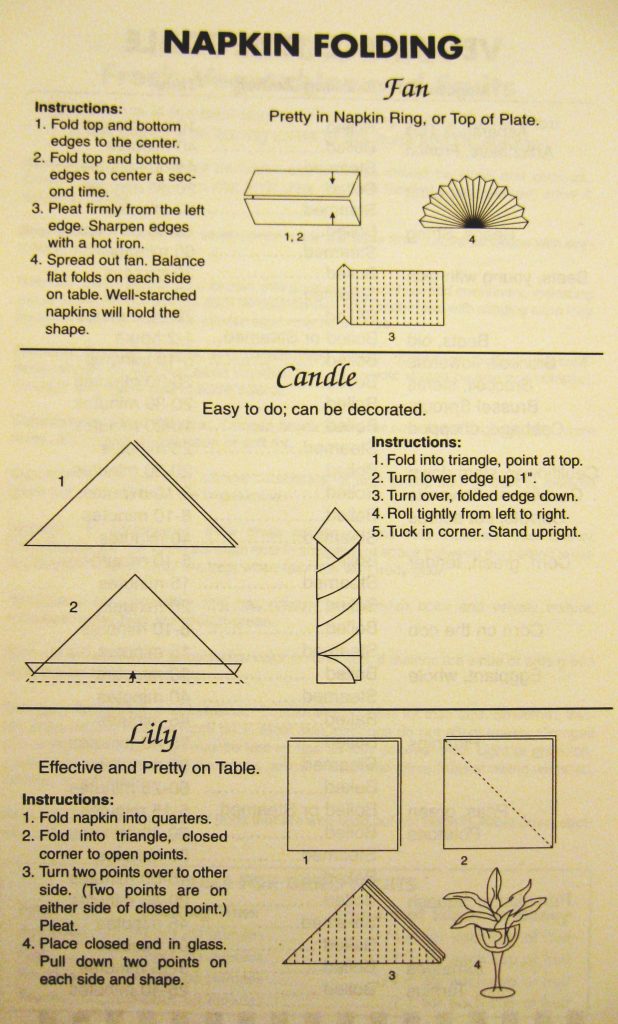 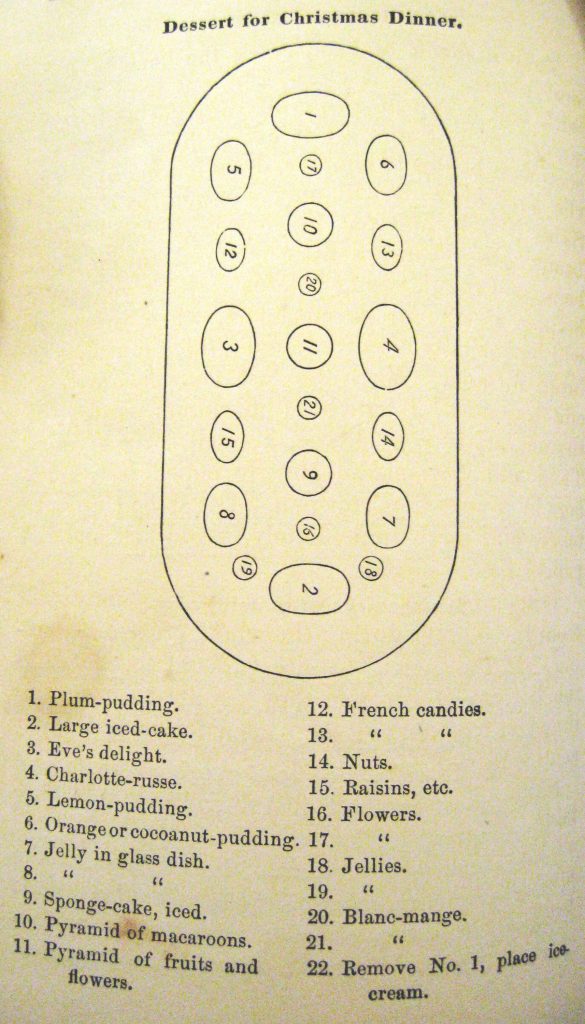 Dessert for Christmas Dinner from The young housewife’s counsellor and friend : containing directions in every department of housekeeping; including the duties of wife and mother. 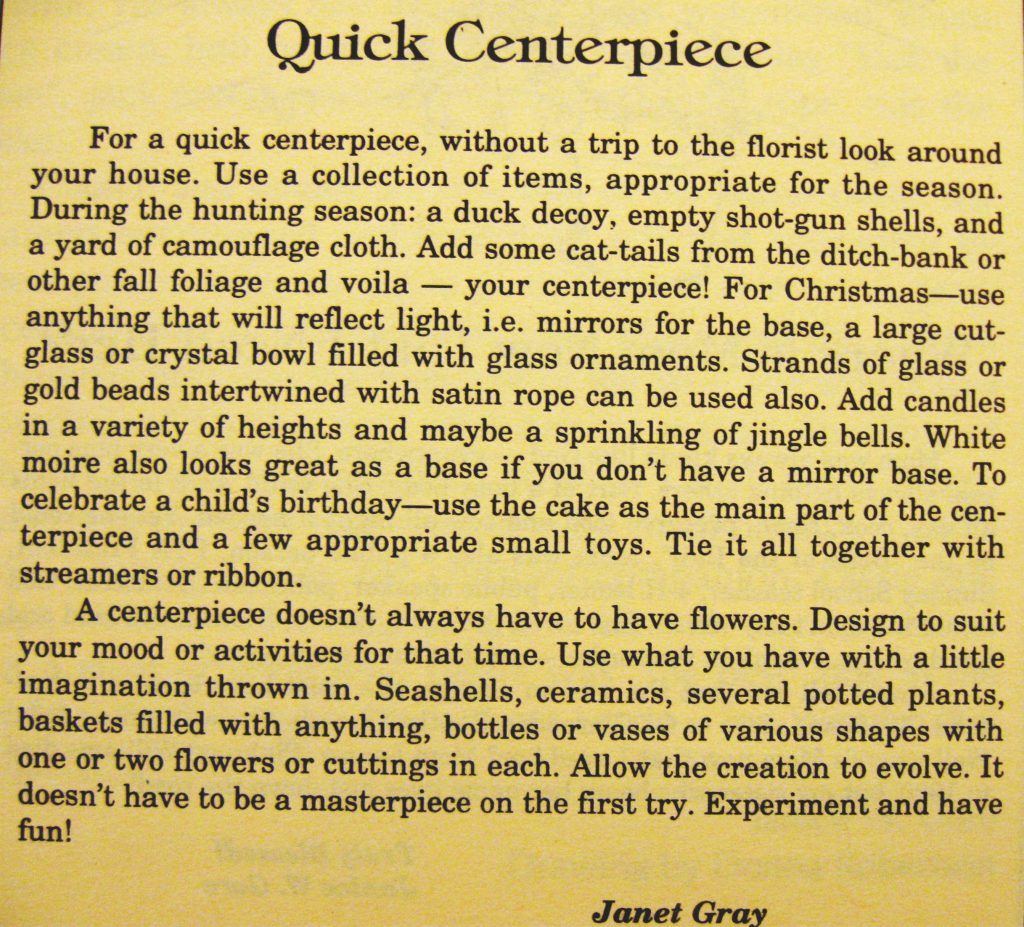 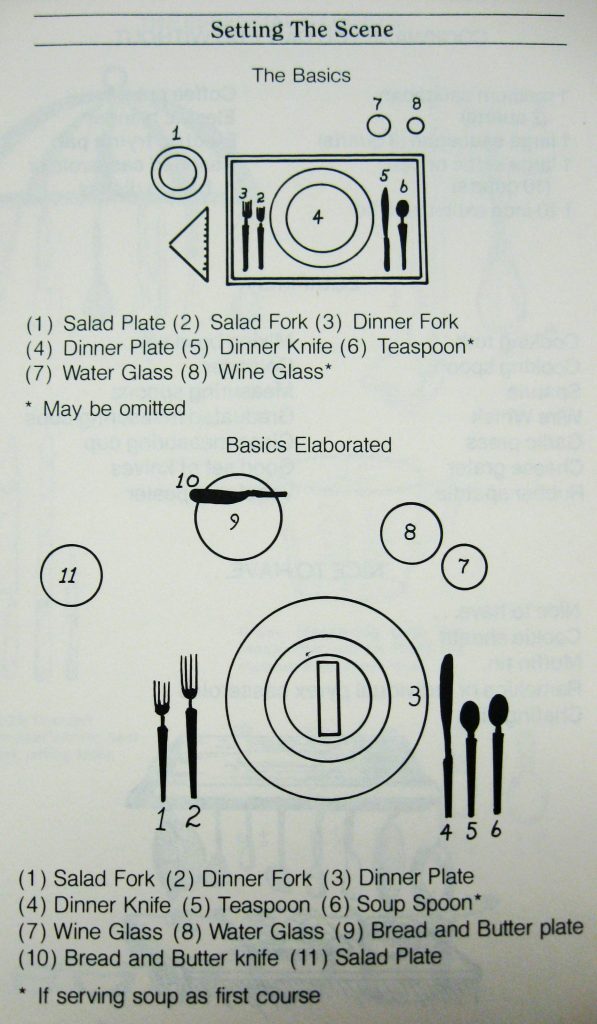 Setting the Scene from Rush hour superchef! : with step-by-step menus.

“Despite [my] being a professional Jew perpetually in the spotlight, North Carolina and its legions of Christian soldiers have been kind to me and my mishpucha, my extended family. We are, after all, the original chosen people who received the covenant at Sinai, begat the Apostles, and perfected the art of curing pastrami.

“They have made me feel at home…. Carolina is nothing like the treacherous land of exile our Eastern European ancestors endured; Scripture-quoting plumbers are not the sword-wielding Cossacks of yesteryear. But should Jesus ever return, I fear that all bets are off.”

Tanny is associate professor of history at UNC Wilmington. 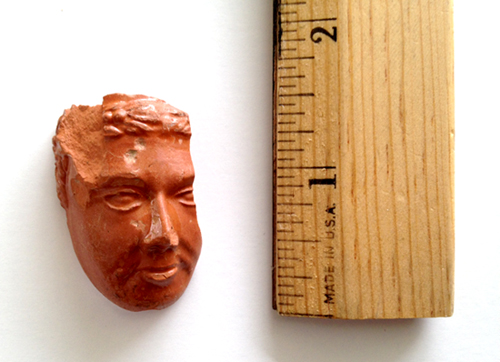 “The house faced Bald Mountain, 4000 feet high, a hill that had a very bad reputation some years ago [1874], and was visited by newspaper reporters. This is, in fact, the famous Shaking Mountain. For a long time it had a habit of trembling, as if in an earthquake spasm, but with a shivering motion very different from that produced by an earthquake.

“The only good that came of it was that it frightened all the ‘moonshiners,’ and caused them to join the church. It is not reported what became of the church afterwards.”

On a Saturday night in Hickory, one hundred years ago this week, Pink Goodson, a 56-year-old African American man, was murdered in his home. Around one o’clock in the morning, shots from multiple guns were fired from outside of the house into the bedroom where Goodson and his wife were sleeping. Goodson got up and was in the process of trying to escape into the interior of the house when a bullet struck him in the head, killing him instantly. His terrified wife crouched by the dead body until morning, afraid to leave the house until she was certain that the killers had gone.

The Hickory Democrat reported that the home of another African American man in the neighborhood had been “shot up in much the same manner some time ago.” The Democrat said that the motive for the killing was not known, unless it was “to frighten the negroes into leaving that section.” The Charlotte Observer also suggested that “the crowd had no intention of killing anybody, but were again expressing their dislike of the negro’s residence there.”

Ten young white boys were quickly arrested for the crime and held without bond in the town jail. The Charlotte Observer reported that “the young men are all sons of good families and there is surprise over the charge lodged against them.”

The killing received attention in newspapers statewide and at least one mention in the national press. In May 1915, the case was listed in the crime section of The Crisis, the publication of the national NAACP. The Crisis reported regularly on lynchings, listing their victims and causes. Their summary of the case was simple, “Pink Goodson, Hickory, N. C., — living in a white neighborhood.”

A few days after the murder, the Charlotte Observer ran a letter from G. M. Garren in Raleigh, who attributed the crime to “the agitation now going on in the State against the privilege that the negro has of purchasing a home and owning land.” Garren goes on to place the blame for the unrest on leaders of the Farmers Union and politicians, arguing that “the laziest way of reaching an office in the South is an agitation of some phase of the race question.” He then predicts that “the perpetrators of this crime will never be punished. The trial will be a farce. No jury can be found who will convict. If the guilty ones are ever brought to trial, they will be turned loose, the heroes of their respective communities.”

On March 20, the same day that Garren’s letter was published and just a week after the murder, the ten young men arrested for the crime were brought to trial. According to the newspaper report, “Before all the witnesses had been examined, Judge Councill arose and asked the court to discharge the boys.” The judge cited insufficient evidence as the explanation for the quick release.

The Hickory Democrat published an editorial on March 25, justifying the handling of the case by local police and courts. Despite reporting in a previous issue that the home of another African American family had been “shot up,” the Democrat insisted that “No evidence has been shown to prove that there was a spirit of ill feeling between the whites and blacks in that neighborhood.” The paper assured its readers that “had the situation been reversed and a white man killed, under the same identical circumstances, we conscientiously believe the progress of justice would have been identical.”

A few weeks after the trial, the Catawba County Commissioners met and agreed to offer a $100 reward for information that would lead to the arrest and conviction of the “parties connected with the murder of Pink Goodson.” Goodson was mentioned only once more in local newspapers, when another home was shot into a few months later. No further progress in the case was reported.