“Serving as North Carolina’s attorney general in 1780, [James] Iredell complained to his wife about the work of North Carolina’s lawmakers, calling it ‘the vilest collection of trash ever formed by a legislative body.’ ”

— From “The Will of the People: How Public Opinion Has Influenced the Supreme Court and Shaped the Meaning of the Constitution”  by Barry Friedman (2009)

On this day in 1925: During a session in New York City, Charlie Poole and his North Carolina Ramblers record their most popular number. At a time when Columbia’s typical country record sells 5,000 copies, “Don’t Let Your Deal Go Down Blues” will sell more than 100,000.

Poole, a native of Randolph County, is a pioneer in the three-finger style of banjo-picking; his technique probably results from a childhood baseball accident that deformed the fingers on his right hand.

The Ramblers will cut more than 70 sides for Columbia, but alcoholism burdens Poole’s career and he dies of a heart attack at age 39.

On this day in 1948: Southerners who have bolted the Democratic Party over its civil rights platform meet in Atlanta and christen themselves “States’ Rights Democrats.” The unwieldy name proves a problem for Charlotte News headline writer Bill Weisner. His solution: “Dixiecrats.”

Presidential candidate Strom Thurmond of South Carolina dislikes the label and considers it “a five-yard penalty” in winning over non-Southerners.

Regardless, the party will lose both the election (capturing only four Deep South states) and the battle against being known as “Dixiecrats.”

“There are still 10 Army bases in the United States named for Confederate generals, and military officials have no plans to change the names….

“One [such] ‘fort’ might (but probably won’t) be undergoing a name-change soon: Fort Bragg, a coastal city in Mendocino County, California, which was founded as a military garrison in 1857.

“Like Fort Bragg in North Carolina, it was named for [Warrenton native]  Braxton Bragg. The big difference? When California’s Fort Bragg got its name, the South hadn’t seceded yet and Bragg hadn’t defected to the Confederate army. So while the town’s name still honors Bragg, you can’t say it was named to honor Confederate General Bragg. That detail might save it from new rules proposed by California Senate Bill 539, which would ban and expunge from state property the names of people ‘associated’ with the Confederacy.

“The Army base [near Fayetteville] was established as Camp Bragg in 1918. More than half a century earlier, Bragg had overseen the killing of U.S. Army soldiers….”

— From “The U.S. military’s disgraceful devotion to the Confederacy” by Timothy McGrath at GlobalPost (via Salon, July 12)

This earlier condemnation of Confederate-named Army bases cited not only Bragg, but also Raleigh-born Leonidas Polk.

“North Carolina’s Senator Josiah Bailey, who voted against the Federal Emergency Relief Act and the National Recovery Administration in 1933, publicly worried about the burden on his poor state to meet the act’s one-third matching funds requirement….

“When the act passed, $40 million was distributed over three years in the state for public projects and relief, including direct aid to blacks from the federal government for the first time since Reconstruction — another thorn in the side of Southern politicians. The state’s contribution of $700,000, far below the required match, and its stalling with on complying with various other conditions denied North Carolinians the full benefit of the programs….”

Because gelatin molds are always a conversation starter. 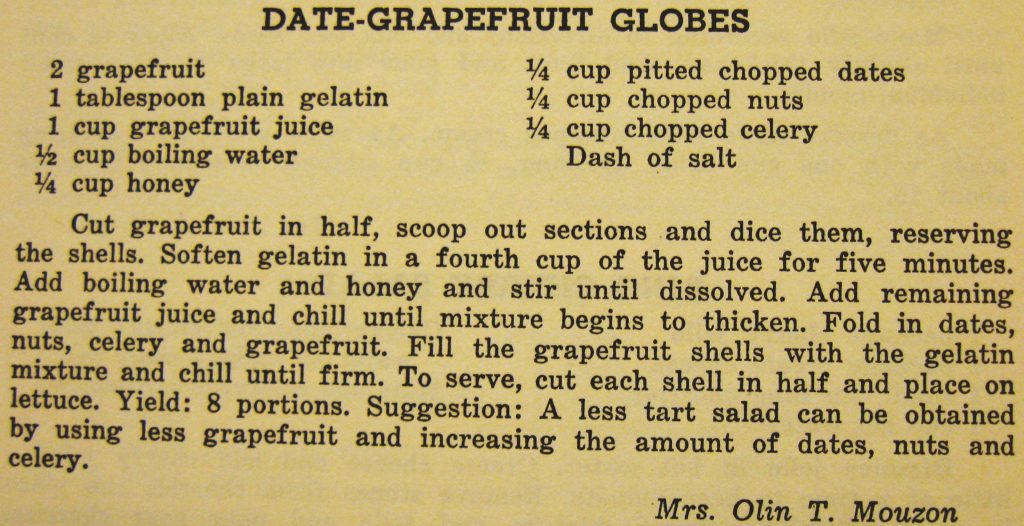 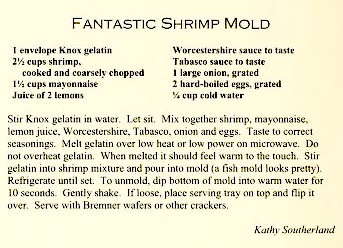 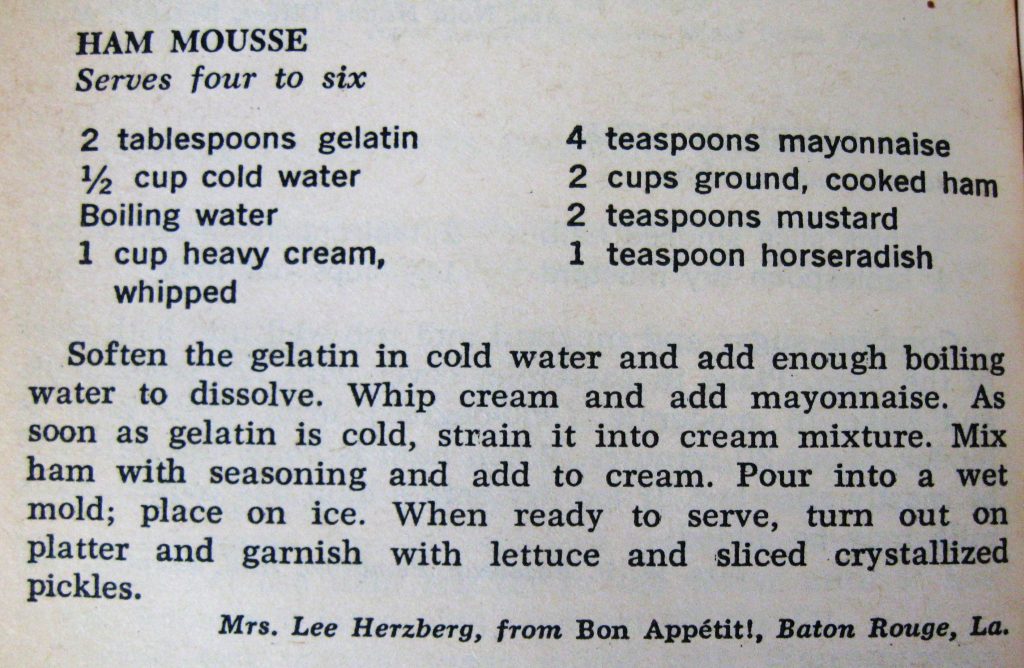 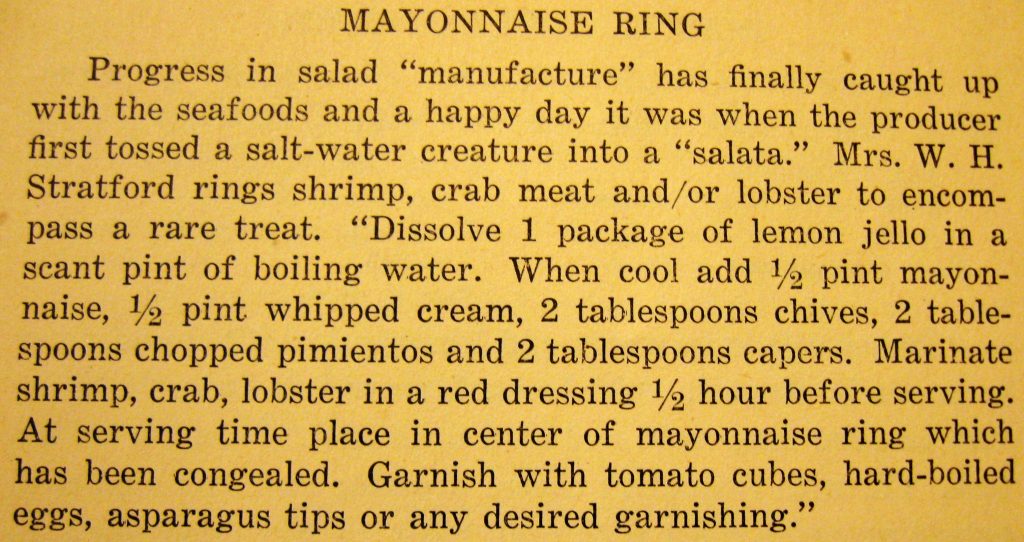 Mayonnaise Ring from Soup to nuts : a cook book of recipes contributed by housewives and husbands of Alamance County and other sections of state and country. 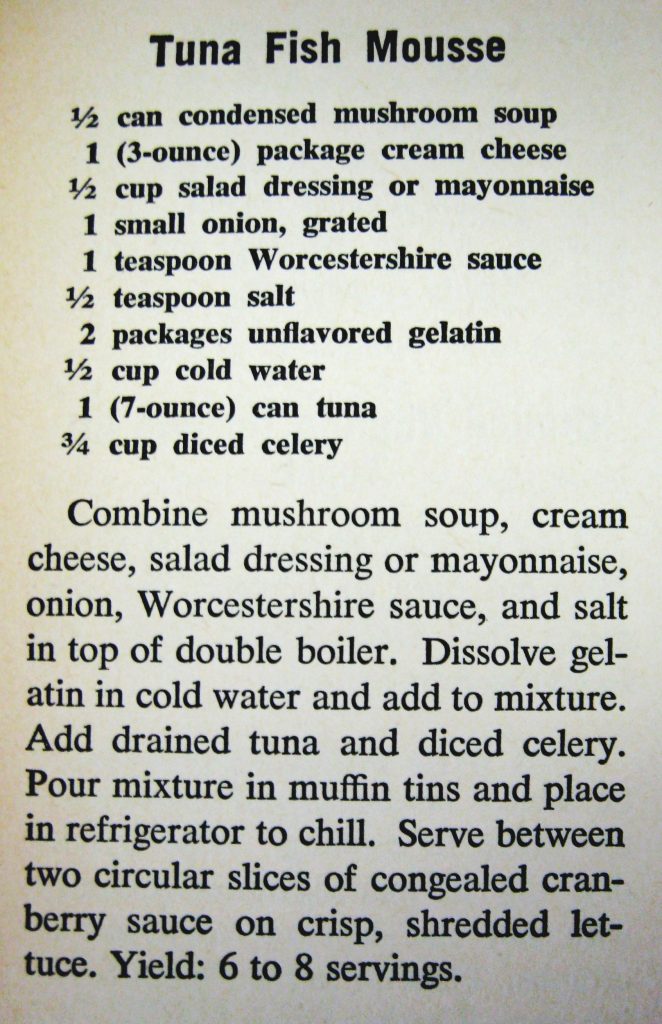 In colonial North Carolina, paper money didn’t have the strong institutional backing it does today, and it was remarkably easy to counterfeit. Our July Artifact of the Month is a paper note from 1729 with a value of forty shillings… But was it real?

The preferred money of the time was coins of silver, gold, and copper. But Great Britain’s mercantilist colonial policy kept the flow of coins to the home country, and the colonies’ supply was always inadequate. To fill the need, all of Great Britain’s American colonies issued their own paper money. These notes were usually issued with little more than faith in the government as backing.

In 1690, Massachusetts became the first colony to issue its own paper money. North Carolina first issued paper money “bills of credit” in 1712 to finance a war against the Tuscarora Indians.

Unlike any other colony, North Carolina’s first four issues of paper money were produced without benefit of the printing press — they were all handwritten. The issues of 1712-13 and 1715 have no known surviving examples, but a few examples of the 1722 and 1729 issues are known. Our Artifact of the Month is an example of the last handwritten issue.

The note states “This Bill of Forty Shillings Shall be Current in North Carolina According to an Act of Assembly Made Nov 27, 1729.”

The note is serial number 730 and has a paper seal. It bears the signatures of John Lovick, William Downing, Cullen Pollock, Edward Moseley, and Thomas Swann. The back, originally blank, displays a couple of endorsements of bearers as the note circulated, a common practice with early North Carolina bills.

Handwritten paper money was highly susceptible to counterfeiting. The squiggly lines at top of this note were a simple means of counterfeit detection. If a note was brought to the proper governmental authority, it could be compared to the paper stubs with the top half of the squiggle with the same serial number.

Experts believe that most surviving examples of handwritten North Carolina paper money are counterfeits made by colonists (numismatists call these “contemporary counterfeits”). Some examples of these have been preserved in early court records of the prosecution of counterfeiters.

But what about our note? Is it a counterfeit? It was apparently condemned as counterfeit at the time, witnessed by the word “Counterfeit” penned at top.

One way to investigate would be to compare the signatures on the note with known-genuine signatures that are likely in the North Carolina State Archives. All five signers were prominent in local government and business, and it is likely that many of their documents have survived. As far as we know, no one has yet conducted this test, so we may attempt it ourselves.

Whether genuine or an early counterfeit, this is one of few survivors that attest to the severe money problems of early North Carolinians.

Those interested in learning more are referred to the excellent Money and Monetary Problems in Early North Carolina by Alan D. Watson, a 1980 publication of the North Carolina Department of Cultural Resources, Division of Archives and History.

“In the years after Harper Lee published To Kill a Mockingbird in 1960, the beloved, moral patriarch Atticus Finch became a cultural icon. Some people were inspired to become lawyers because of Atticus. And some named their children after him…. So how do parents who named their kids Atticus feel [now]?…

“[When] John Edgerton and his wife Shelagh Kenney, both criminal defense lawyers in Durham, North Carolina, chose to name their son Atticus…  ‘It represented some ideals that both my wife and I believe in pretty firmly about how people should be, and how they should treat each other,’ Edgerton said. He certainly did not expect 72-year-old Atticus to say things like ‘The Negroes down here are still in their childhood as a people.’

“But while it’s sad to lose the starkness of the original’s Atticus righteousness, Edgerton said, ‘it also provides some depth that wasn’t necessarily there before. Real life is not at all black and white.’ He explained that once his son (now 8 years old) was born, he became the most important Atticus—whatever happens to Atticus Finch, Atticus Kenney will still be Atticus Kenney. ‘Once you have the real child in front of you, that governs your perception,’ Edgerton said. ‘Not what somebody wrote in a book.’ ”

Atticus, though still uncommon, has been steadily climbing the given-name popularity chart.