Our September Artifact of the Month is a hand-embroidered pillowcase — a memento made for a UNC graduate by his bride-to-be. 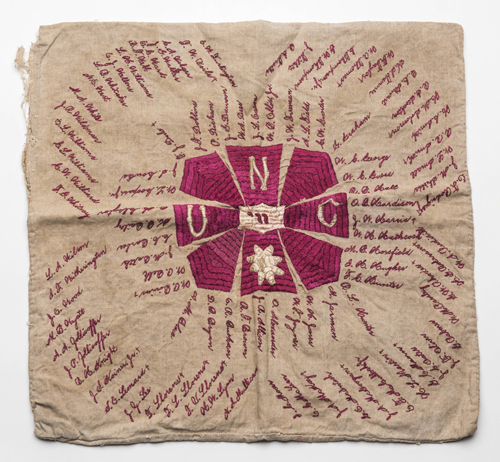 This pillowcase was embroidered by Georgia Haskett for her fiance George Washington Rhodes when he graduated from UNC in 1911. During his time as a student, he was a member of the Philanthropic Debating Society. Rhodes must have been known for his love of books as he was described in the yearbook as “One of those antiquarian monks who thinks that a college is a place to learn things.” Soon after graduating, Rhodes became a teacher.

Haskett embroidered ninety-nine names — presumably the names of UNC graduates — in maroon-colored thread on the pillowcase. Some of the names have a cross embroidered next to them. 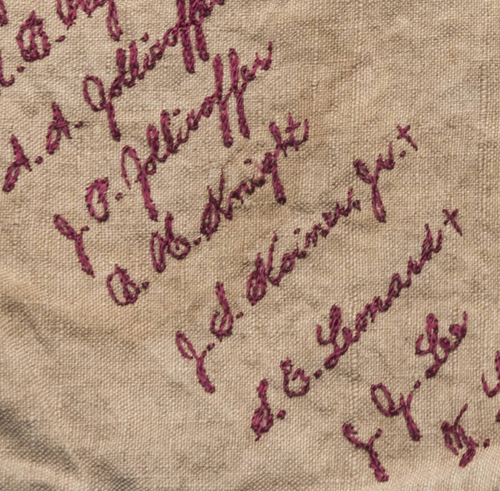 The center depicts a symbol with “UNC” embroidered in white thread. The pillowcase originally had fringe on the edge, which has fallen off with age.

The significance of the symbol in the center and the crosses remains a mystery.

The pillowcase can be viewed in our digital collection Carolina Keepsakes, a compendium of treasured artifacts related to life at UNC.

Rhodes’ daughter Eleanor Sullivan donated this pillowcase to the North Carolina Collection Gallery in July. The NCC Gallery is pleased to be the second recipient of this gift, more than one hundred years after it was given to its first recipient.