On this last day of our ghostly journey, we head to the Outer Banks of North Carolina where tales of pirates and mysterious shipwrecks abound. 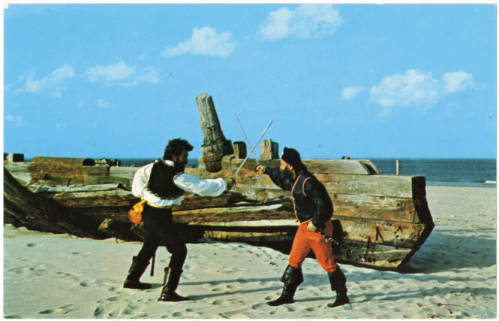 Ocracoke Island is home to the final resting place of the notorious pirate Edward Teach, aka Blackbeard. It was here, at Teach’s Hole, in 1718, that Blackbeard’s career of plundering was brought to a dramatic and violent end. Lt. Robert Maynard of the British Royal Navy, on orders of Virginia governor Alexander Spotswood, attacked Blackbeard’s ship The Adventure. A bloody battle ensued, ending with the famed pirate’s death. The story goes that Lt. Maynard threw Blackbeard’s headless body into the waters of Ocracoke Inlet. The pirate’s captured crew looked on as his body swam three laps around the ship before sinking to the watery depths below. Maynard affixed Blackbeard’s head to the bowsprit of his ship as proof of the pirate’s death. Apparently, Blackbeard‘s ghost still haunts Teach’s Hole, crying out and searching for its head. 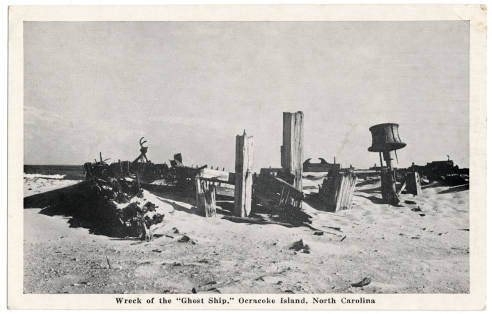 Shipwreck stories from North Carolina’s Outer Banks are common enough; but, the story of the wreck of the Carroll A. Deering remains one of the most mysterious. The Carroll A. Deering was a massive, five-masted commercial schooner. On her return voyage from Brazil to Virginia, the Carroll A. Deering met her fate off Cape Hatteras in January, 1921. A keeper at the Cape Lookout Lighthouse reported seeing the ship on January 19th. Two days later, the Coast Guard discovered the ship run aground at Diamond Shoals, an infamous area for shipwrecks. Due to storms off the coast, it was another four days before the waters were calm enough for the Coast guard to approach the ship. February 4th, 1921, the Coast Guard boarded the Carroll A. Deering only to find it abandoned. But, more than just the crewmembers were unaccounted for; all personal effects, lifeboats, navigational equipment, and ship documentation were missing. What they did find was evidence suggesting a hasty departure. Despite an extensive investigation by the US government, no one knows what happened to the crew of the Carroll A. Deering. Many theories have surfaced including piracy, hurricanes, and mutiny. Some even blame paranormal activity, citing the Bermuda Triangle as the culprit to the disappearance of the ship’s crew.