Turkey Timbales from Recipes for gourmet eating : a compilation of favorite tested recipes of housewives of Greenville and out of town friends. 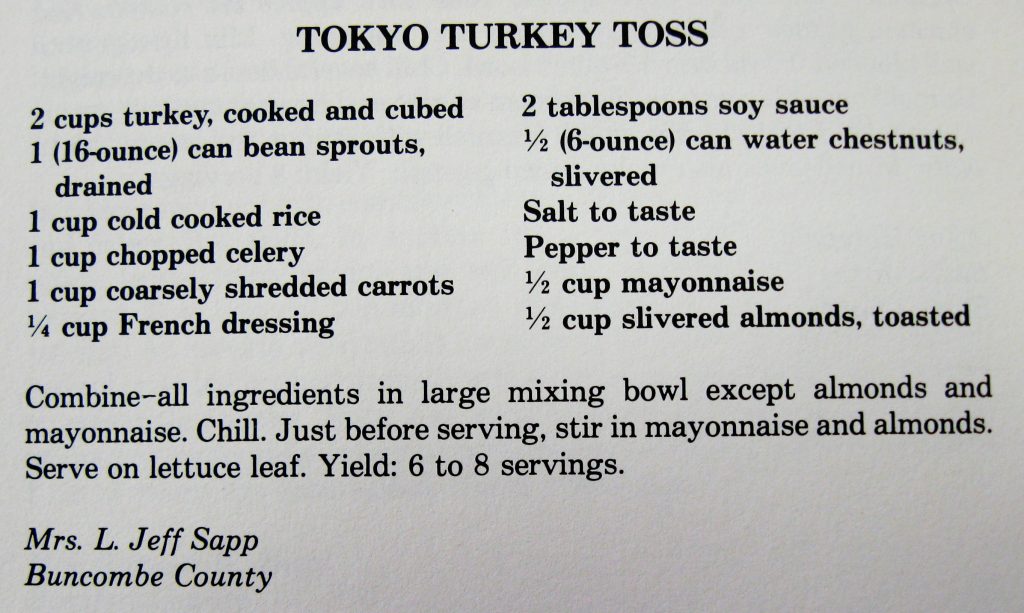 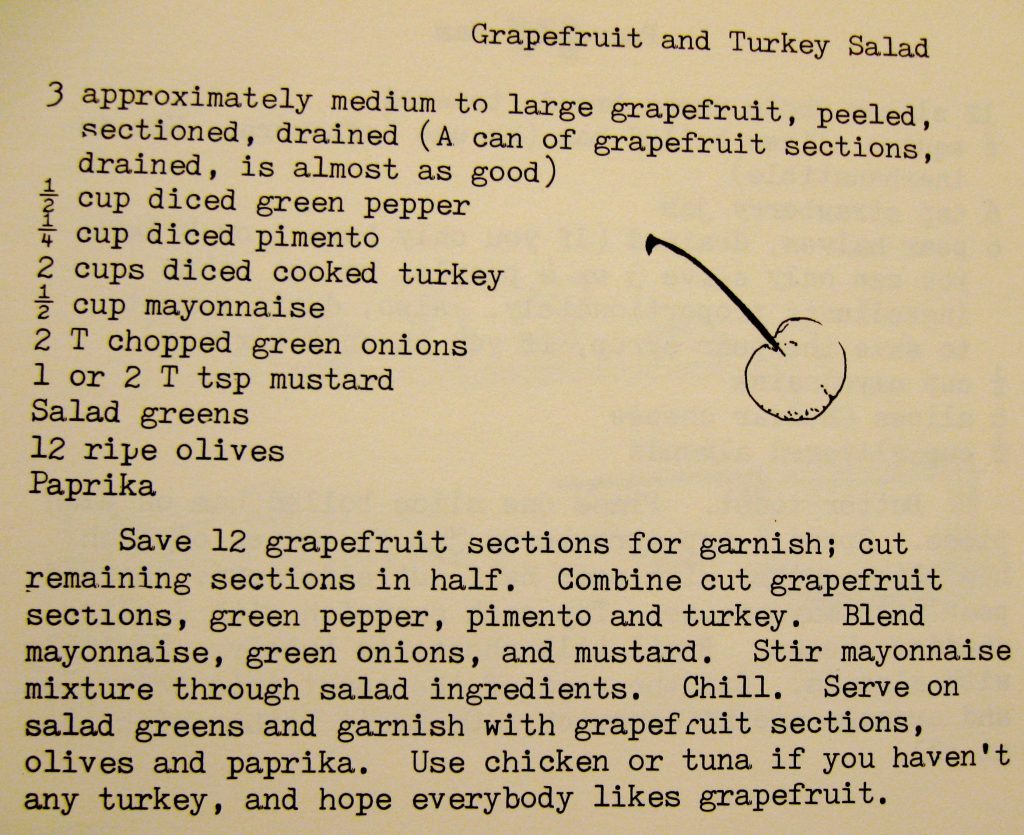 Grapefruit and Turkey Salad from What’s left is right : what to do with leftovers when you’re desperate.

Turkey Crunch Casserole from A Taste of the old and the new. 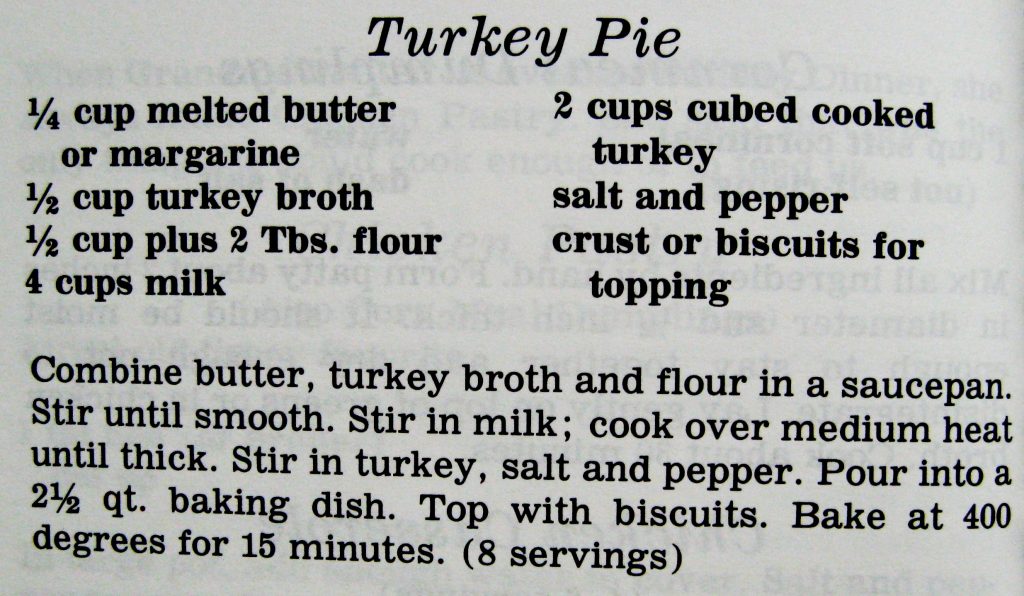 Turkey Pie from Just like Grandma used to make. 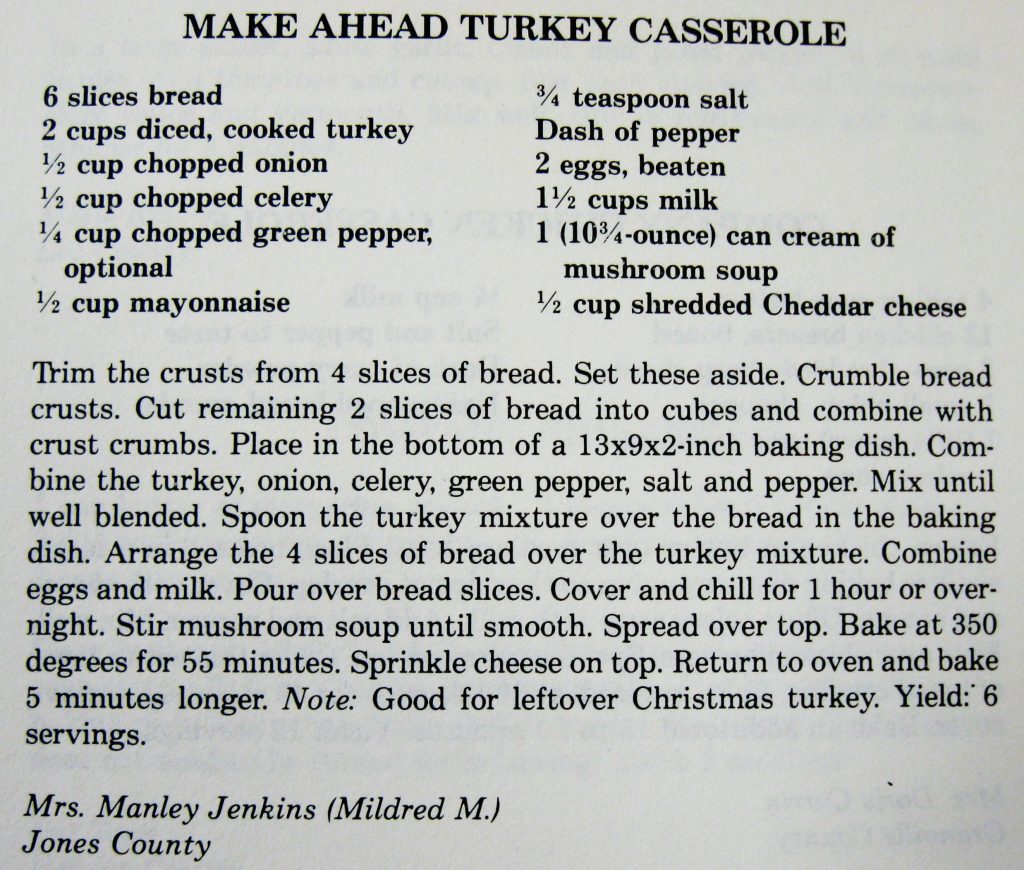 “In [a ‘Voices of the White South’ article in Life magazine in 1956] a 38-year-old white sharecropper in North Carolina summed up his support of segregation and his views on his black neighbors and fellow farmers this way:

“ ‘We’re working to own our farm. We want to hurry up and get someplace. But they just don’t work. They just don’t care. All they’re looking for is the end of the week when the landlord will shoot ‘em a little money. [T]hey take a bath once a month, and their fields don’t look like they’s hardly tending them.’ At the same time, according to LIFE, the sharecropper’s approval of segregation was ‘based as much, or more, on personal pride than notions of color. He would rather have a Negro living next door than he would a white “redneck” or “peckerwood.” In his view, “there’s nothing sorrier than a sorry white man.” ‘

“The white sharecropper’s wife, LIFE wrote, ‘also approves of segregation and will not let her 9-year-old daughter play with an 8-year-old Negro neighbor. This is the reason she gives: “If our landlord came down here and saw her playing with a colored boy, he wouldn’t respect us. Only poor class whites do that. We’re trying to keep our self-respect and keep the highest level socially we can. We’re willing to work with the Negroes, but that’s as far as we’ll go.” ‘”

— From “LIFE and Civil Rights” at life.time.com

“The Yale and Harvard football teams played (?) at Springfield, Mass., last Saturday a match game which was little short of a free fight. Of the 22 men engaged, six were taken off the field injured, and… one lay for seven minutes on the field unconscious….

“Excepting the bullfights of Mexico and Cuba, there has been no sport quite so brutal as football, as it is played to-day, since the tourneys of the Middle Ages and the gladiatorial contests which delighted the elite of ancient Rome….

“[At least] prize fighting is a trial of strength and of skill; football, of brute strength only….”

The Record & Landmark didn’t mention instances of such savagery closer to home, although football had taken root in North Carolina several years earlier. 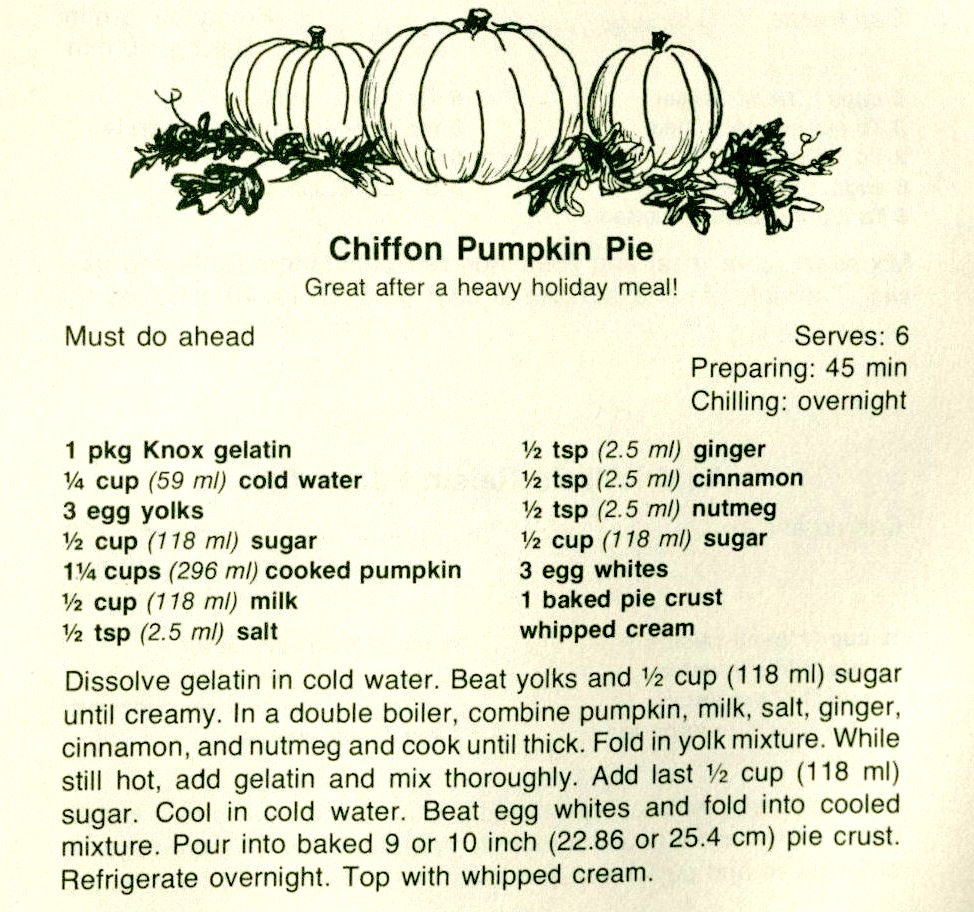 Chiffon Pumpkin Pie from Out of our league. 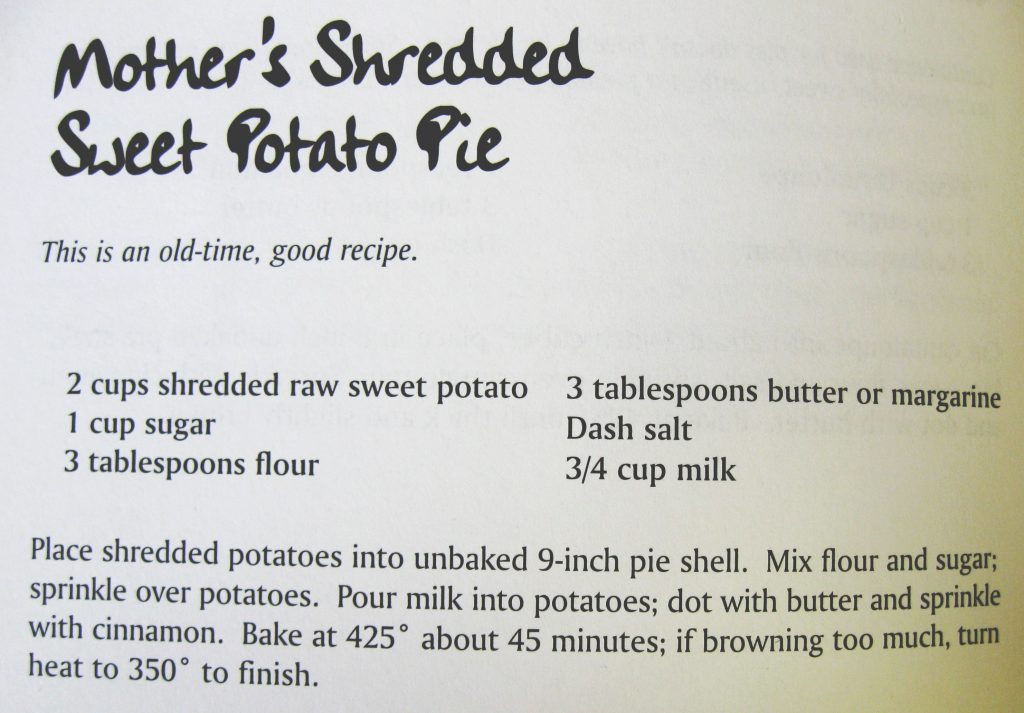 Mother’s Shredded Sweet Potato Pie from Supper’s at six and we’re not waiting!

Pumpkin Pie from The Charlotte cookbook. 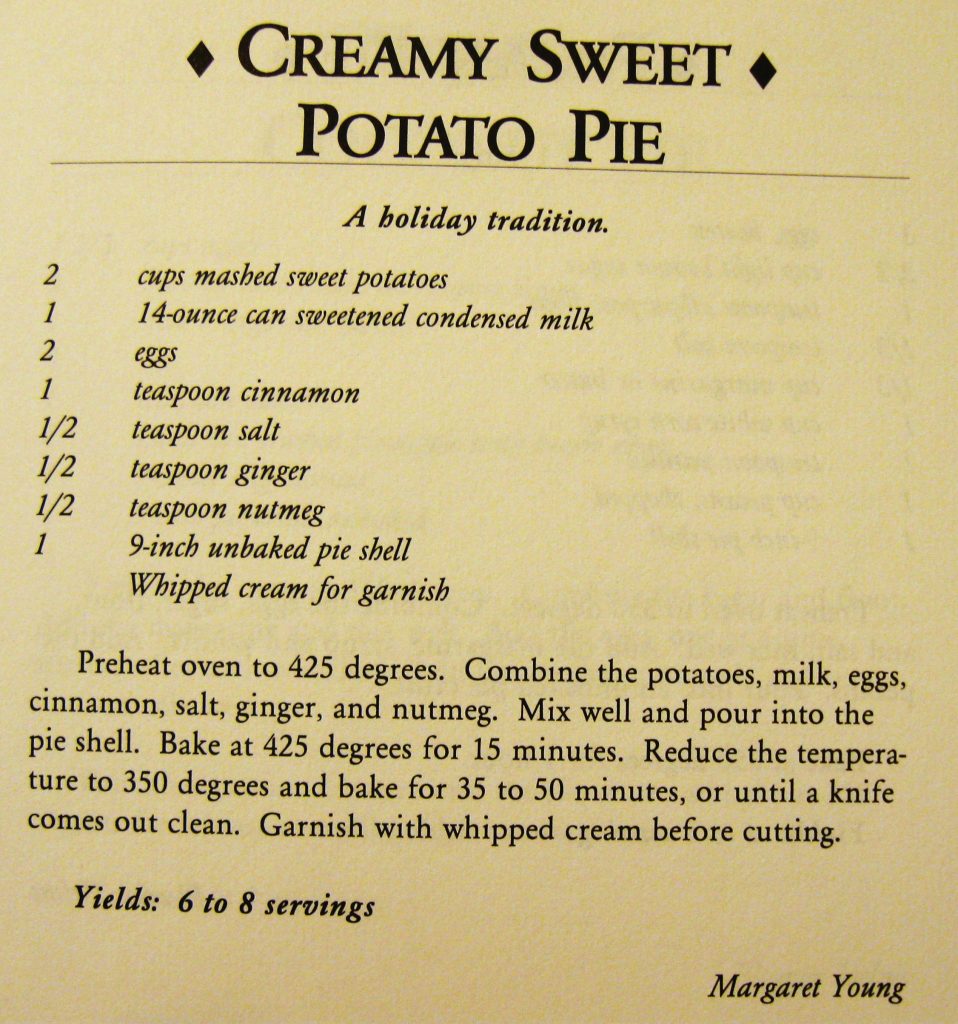 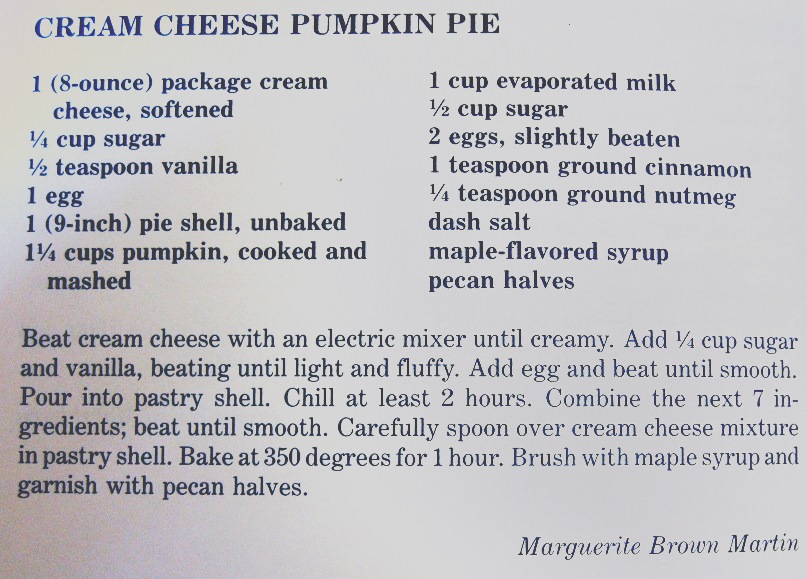 Cream Cheese Pumpkin Pie from A dash of Down East. 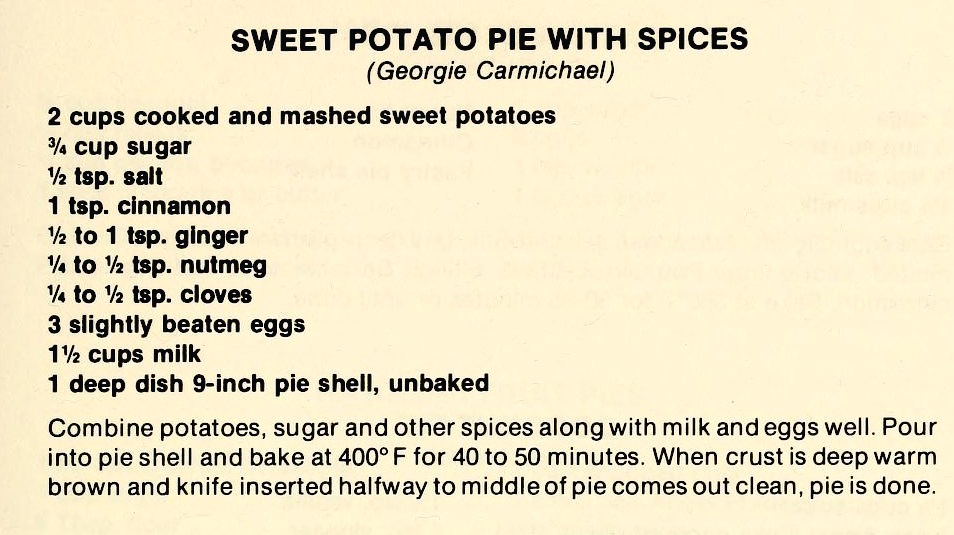 Macy’s Thanksgiving Day Parade enjoys the title for the nation’s most famous Thanksgiving parade, but North Carolina‘s most well-loved Thanksgiving Parade is surely Carolinas’ Carrousel. Our November Artifacts of the Month are two commemorative Carrousel buttons.

The celebration has been held every year since its inception and is televised regionally. When it nearly folded in 2013, the company Novant Health rescued it, renaming it the Novant Health Thanksgiving Day parade (and leaving us to perpetually wonder: What was with the extra “r” in “Carrousel”?)

The parade remains as an annual holiday tradition, with floats, balloons, celebrity performances, and an annual scholarship competition. (Would you fault us for bragging if we mentioned that one of the NCC Gallery’s former student employees won 5th place in the 2010 competition?)

As we make our annual gratitude list in honor of Thanksgiving, we’ll certainly include blog contributor and ephemera collector Lew Powell. Thanks, Lew, for donating these fantastic buttons (and so many others).

“In 1850, a strange package arrived at the North Carolinian [in Fayetteville]. It contained a letter and what appeared to be the rotting organ of an animal.

“ ‘The piece which was left with us,’ the editors wrote, ‘has been examined with two of the best microscopes in the place,’ and certainly contained blood. ‘It has the smell, both in its dry state and when macerated in water, of putrid flesh; and there can be scarcely a doubt that it is such.’

“Thomas Clarkson, who lived on a farm about 13 miles southwest of Clinton, wrote the accompanying letter: ‘On the 15th of Feb’y, 1850, there fell within 100 yards of the residence of Thos. M. Clarkson in Sampson county, a shower of Flesh and Blood, about 50 feet wide, and… 250 or 300 yards in length.’….

“The Clarkson family were not the only witnesses to this strange phenomenon in North Carolina. It was reported to have rained flesh on a farm near Gastonia in 1876, and a shower of blood in Chatham County in 1884 was investigated by none other than F. P. Venable, a young chemist who went on to become president of the University of North Carolina.

“These are only a few of the two dozen reported such cases occurring in 19th-century America. Blood and meat were claimed to rain down on slave and soldier, adult and child. Even if all the events were hoaxes, it remains one of the strangest and most obscure artifacts of our cultural psyche.”

“[In 1971 the Grateful Dead] tour stopped at Wallace Wade Stadium at Duke University….Eric Greenspan was the student responsible for booking the show, which included the Dead, the Beach Boys and the Butterfield Blues Band. It was his first large outdoor event, and he was ill prepared. The stage was low and had no roof, the security barricade was a rope and there were no trailers for dressing rooms. The weather forecast was for rain….

“[But] the sun was bright as the gig day dawned, and…  among other chores, Eric took [crew member Bill] Candelario to the store, where he bought 15 pairs of Converse sneakers, and swapped them around so that everyone had two colors….

— From “A Long Strange Trip: The Inside History of the Grateful Dead” by Dennis McNally (2002)

“Working on the Grateful Dead’s farewell shows in Chicago, [entertainment lawyer] Greenspan’s career had come full circle — back to a show he promoted as a Duke University student…. ‘Everything in my career dates back to that,’ he says.”

— From “Music’s Most Powerful Attorneys: From Litigation to Performing Rights, Radio to General Counsel” (July 22, 2015)

“Sen. Robert Reynolds, a Democrat from North Carolina and an outspoken opponent of Jewish migration, claimed Jews were ‘systematically building a Jewish empire in this country,’ and often argued that Jews were alien to American culture. ‘Let Europe take care of its own people,’ Reynolds argued. ‘We cannot care for our own, to say nothing of importing more to care for.

“Reynolds disseminated his nativist views through a publication he founded called the Vindicator. The publication carried headlines about the ‘alien menace’ such as ‘Jewish Refugees Find Work,’ ‘Rabbi Seeks Admission of One Million War Refugees,’ and ‘New U.S. Rules Hit Immigration of German Jews.’ Defending himself against critics, Reynolds told Life magazine that he simply wanted ‘our own fine boys and lovely girls to have all the jobs in this wonderful country’….

“William Dudley Pelley, a leading anti-Semite and organizer of the [Asheville-based]  ‘Silver Shirts’ nationalist group, claimed that Jewish migration was part of a Jewish-Communist conspiracy to seize control of the United States. Pelley, whose organization routinely used anti-Semitic smears such as ‘Yidisher Refugees’ and ‘Refugees Kikes,’ attracted up to 50,000 to his organization by 1934….”

— From “Anti-Syrian Muslim Refugee Rhetoric Mirrors Calls to Reject Jews During Nazi Era” by Lee Fang at the Interceptor (Nov. 18)

“[Floyd] McKissick’s team was never able to lure major industry to Soul City, but two industries did end up landing there after McKissick left. One was hazardous waste: Warren County notoriously became the place where North Carolina decided to dump tons of untreated, PCB-tainted soil in a landfill near Soul City. Black residents protested this conversion of their homeland into dumping grounds, many of them lying in front of the trucks delivering the soil. Their resistance marked the birth of the civil-rights-based environmental justice movement, though these groups weren’t able to stop toxic soil waste from infiltrating the earth around Soul City.

“The other industry that ended up there: prison. The ‘Soul Tech I’ business incubator McKissick built was sold off and is now the Warren Correctional Institution, an 809-bed facility housing far more people than McKissick was ever able to recruit to Soul City….”