On this day in 1921: “The Lost Colony” premieres before Gov. Cameron Morrison and other state leaders in the old Supreme Court building. The five-reel silent movie, among the nation’s first uses of film for educational purposes, is the brainchild of Mabel Evans, superintendent of Dare County schools.

The state-financed, $3,000 budget included hiring Elizabeth Grimball, director of the New York School of the Theatre, to cast and direct the three-week shooting on Roanoke Island.

Four prints of “The Lost Colony” will be shown throughout the state; in areas without electricity, the projector is run by a generator-equipped Model T Ford.

[Much more here about Ms. Grimball and her ambitious efforts in North Carolina.]

Tomorrow is National Pickle Day.  Try out one of these recipes to celebrate. 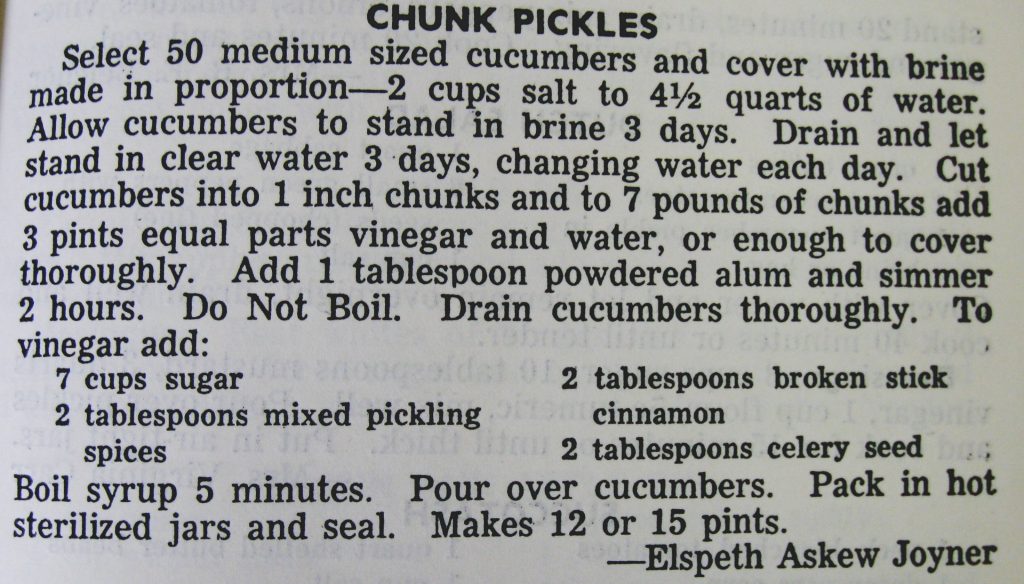 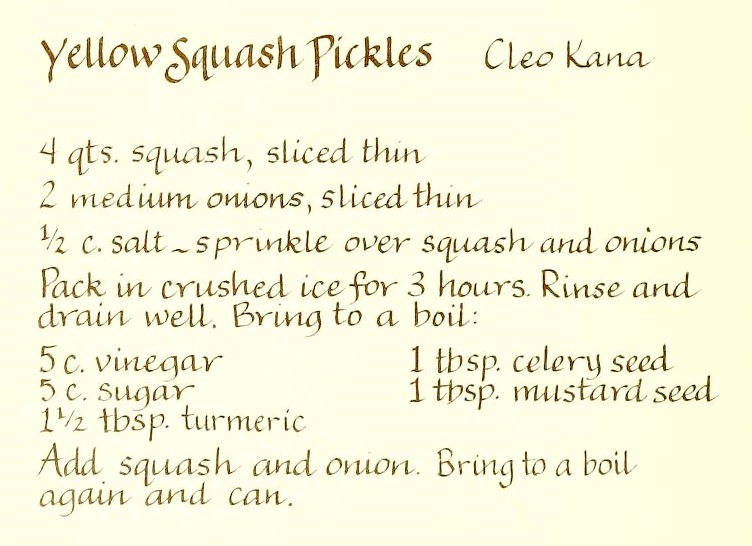 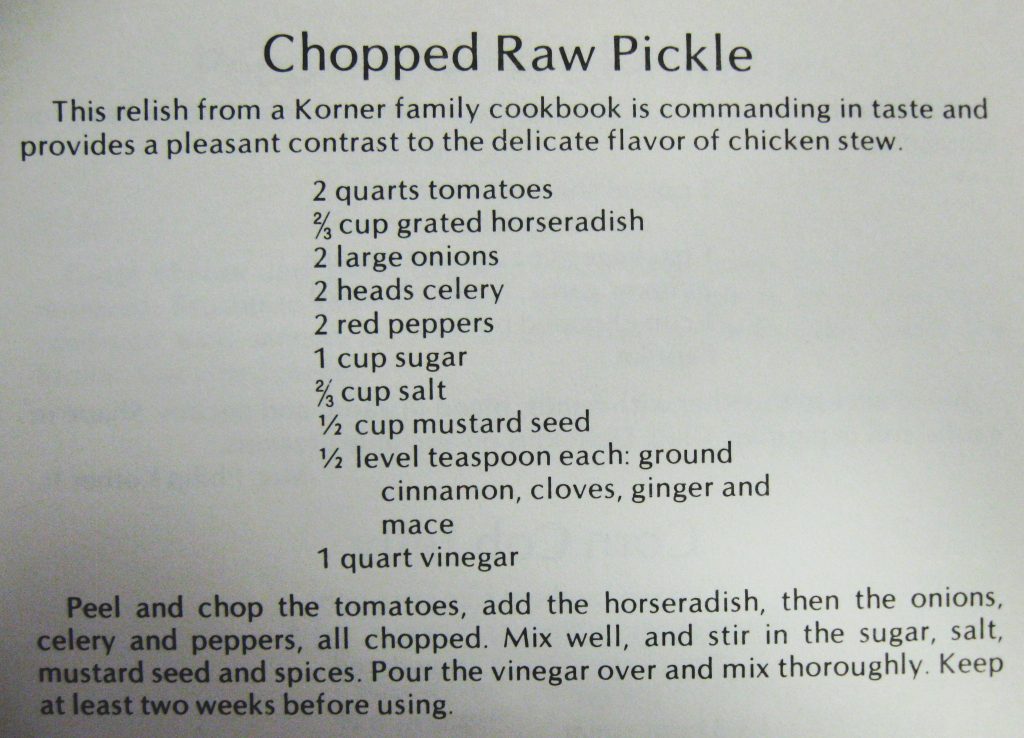 Dill Pickles from The Charlotte cookbook. 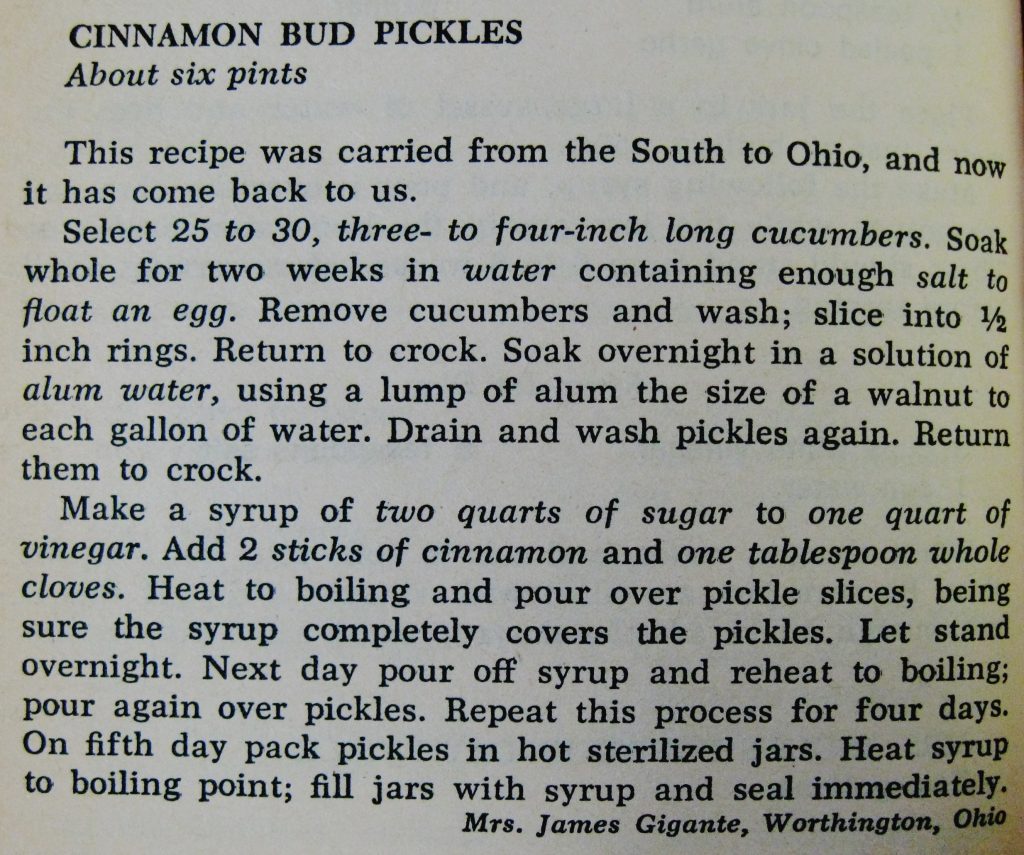 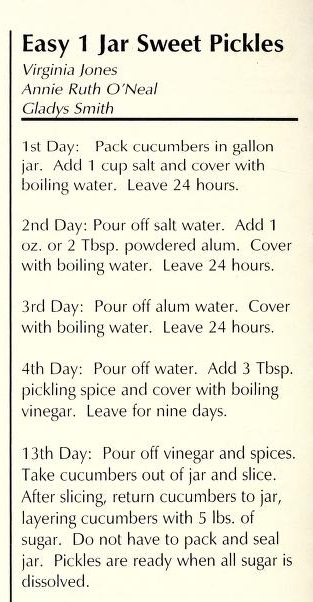 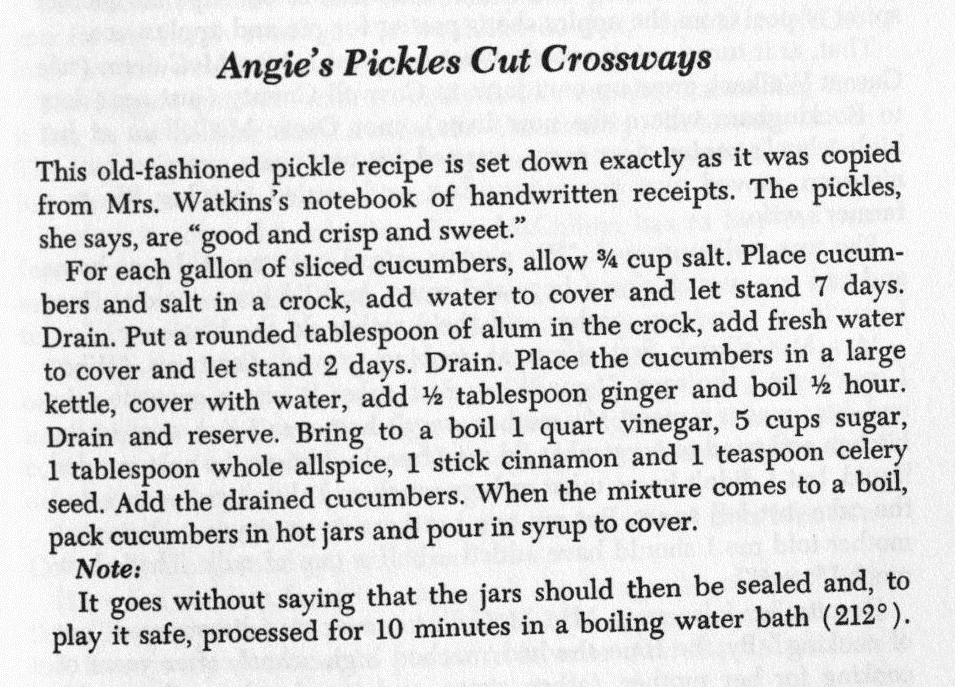 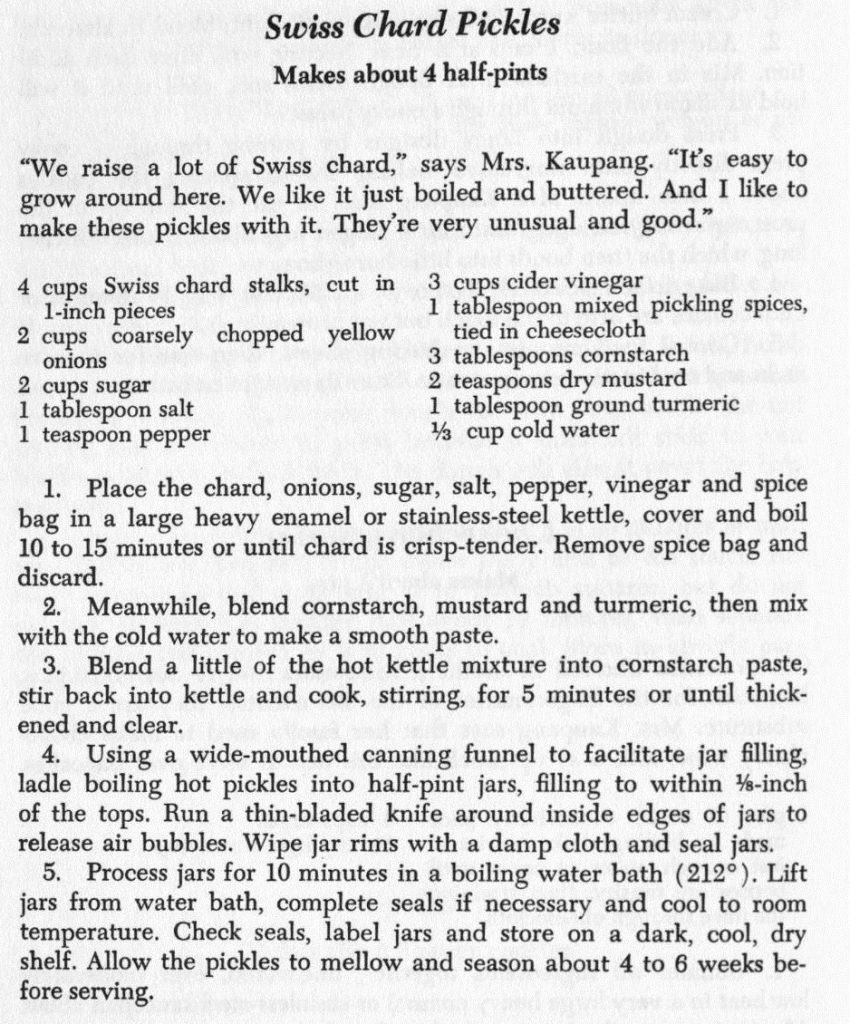 Nicholas Graham’s revelation of Carrboro’s backstory — how UNC president and chemist Francis P. Venable gratefully  handed over title to the town’s name to the way less modest Julian Shakespeare Carr — reminded me of other instances in which North Carolina’s intent to honor the intelligentsia proved challenging:

— Conover is named for the Italian sculptor Antonio Canova.

— Murphy is named for the North Carolina educator Archibald Murphey.

— And the namesake town of the New England writer Oliver Wendell Holmes gets the spelling right — but calls itself (as acknowledged by the Gazetteer with a rare pronunciation tip) Wen-DELL.

The bustling mill town just west of Chapel Hill went through a relative flurry of renaming in the early 20th century. The unincorporated area was known locally as West End, a mundane name reflecting its location relative to Chapel Hill. With the establishment of a textile mill there in 1898, the area began to grow and develop an identity of its own separate from Chapel Hill. It was known briefly (and informally) as Lloydsville, after Thomas Lloyd, original owner of the first mill. In 1911, the town was incorporated under the name of Venable, after Francis P. Venable, President of the University of North Carolina.

I have not been able to find any record of why the town leaders chose to honor President Venable. Perhaps, while they were setting up a separate community, they wanted to commemorate their close ties to the University. The only railroad stop in the immediate area was the depot near the mill, meaning that every student and faculty member traveling by train would make their way to Venable. All I have been able to track down so far is what Venable himself thought having the neighboring town named after him: he didn’t like it.

Evidence of Venable’s displeasure is in a very interesting letter we just came across in the University Archives. The letter is from Julian S. Carr, prominent alumnus, and the owner, since 1909, of the West End/Venable mill and neighboring buildings. Given his investment in the business community, Carr would have been a much more likely person to honor with the name of the town. Nobody thought so more than Carr himself.

In a letter dated 20 January 1913, Carr wrote to President Venable:

I recall a conversation I had with you some time ago with reference to the naming of Venable, the factory town West of Chapel Hill. If I remember correctly, you were not especially pleased that the town had been named as a compliment to you. Since then my boys and I have purchased the other Tom Lloyd mill, and we now own about all of Westend, otherwise styled Venable, and I am thinking that if I had your consent, I would have the name changed from Venable to Carrsboro. However, I will take no action in this matter until I hear from you. Of course you understand I want your full consent and assent to this proposition, and I will do nothing without it.

Bespeaking your prompt response, I beg to remain,

Venable did not mind at all. The following day, Venable’s secretary sent a response: “Dr. Venable directs me to write to you that he is entirely willing to have the name changed and thinks the name suggested by you an excellent one.”

Local histories usually say that the name was changed to honor Carr after he agreed to pay for electricity for the town. While this is true, the majority of the residents of the town at the time were likely Carr’s employees, so his was not a purely philanthropic gesture. Carr was clearly interested in having his family name memorialized on the North Carolina map. He got his wish. Later in 1913, the town name was formally changed and remains Carrboro today.

“About the time we crossed the white chalk line which divides Virginia from North Carolina, we became aware that some sort of dispute was taking place in the interior of the car….When we reached a town of some size we sought out the largest garage and demanded an inspection….

“[The mechanic] glanced in at the knickerbocker-clad Zelda, seated in nonchalant gravity in the front seat….

” ‘It’s a pity that a nice girl like you should be let to wear those clothes.’

“It was fifty years of provincialism speaking; it was the negative morality of the poor white — and yet it filled me with helpless and inarticulate rage…..

“We got ourselves eventually from the garage…but we could not erase it from our minds that, so long as Zelda wore her white knickerbockers, the surrounding yokelry regarded us with cold, priggish superiority, as ‘sports.’ We were in Carolina, and we had not conducted ourselves sartorially as the Carolinians….

“At twilight we came into Greensboro, which offered the O. Henry Hotel, an elaborate hostelry, at sight of which Zelda decided to slip on a skirt over her knickerbockers….”

— From “The Cruise of the Rolling Junk” by F. Scott Fitzgerald, a somewhat fictionalized account of a trip the Fitzgeralds took from Westport, Conn., to Montgomery, Ala., in 1920.  Serialized in Motor magazine (March-May 1924)

An acquaintance of Jackson during the several years before he moved to Tennessee will recall him as “the most roaring, rollicking, game cocking, cardplaying, mischievous fellow that ever lived in Salisbury.” (Well over two centuries later, a gamecock that continues to attack after losing an eye is still known as a “Jackson.”) 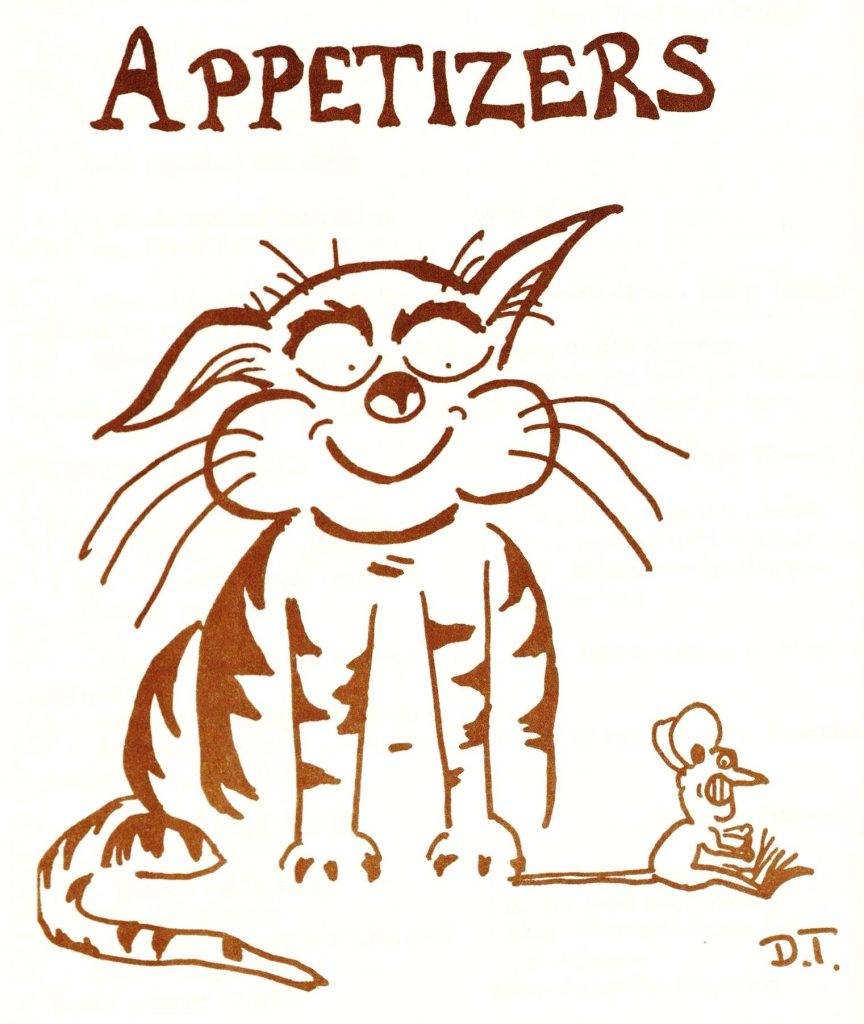 Image from A book of favorite recipes.

Nut Tid-Bits from Recipes for gourmet eating : a compilation of favorite tested recipes of housewives of Greenville and out of town friends. 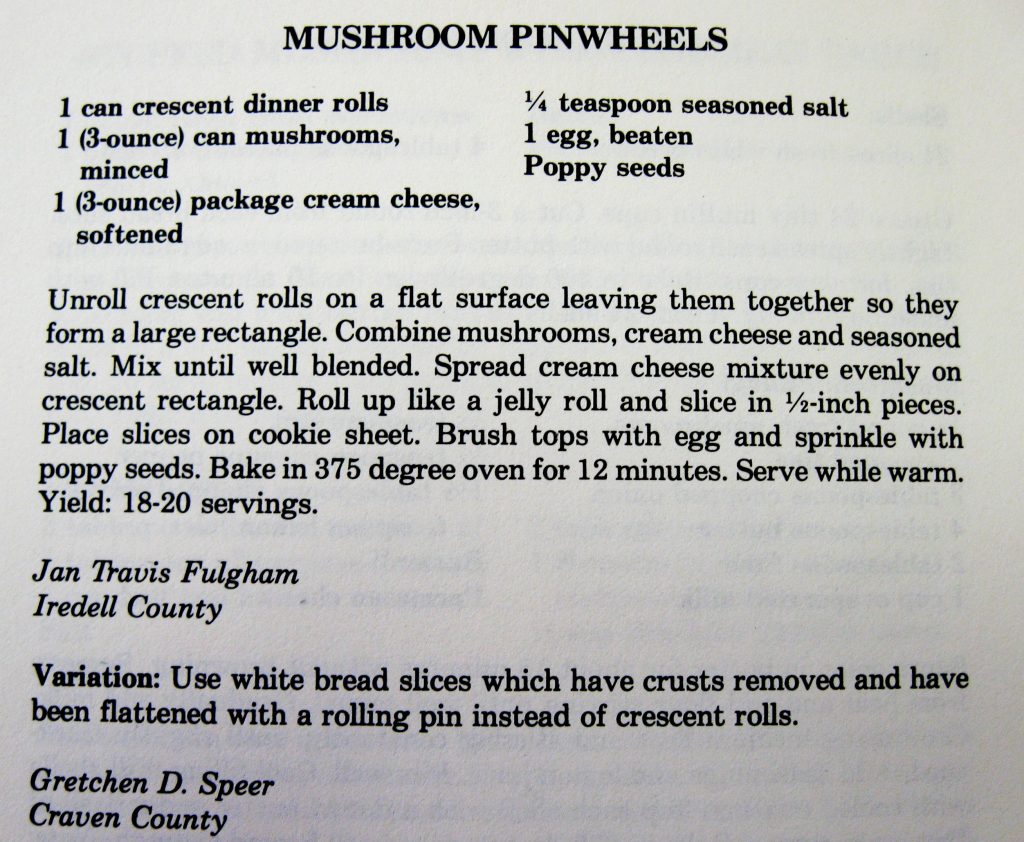 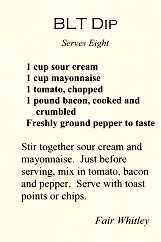 Cocktail Tomatoes from A book of favorite recipes.

“Two aspects of life in Charlotte intrigued [Harry] Golden from the minute he arrived in the early 1940s: hookers and segregation.

” ‘All the whores frequented the post office,’ he wrote. ‘On a weekday evening, dozens of salesmen repaired to the Charlotte post office to send in their reports to home offices in Cincinnati or New York or Chicago. The minute a man dropped that brown envelope in the brass out-of-town slot, the women watching knew he wasn’t a cop and he was probably lonely.’

“He added, ‘The cheap night rates for [telephone] long distance did more to subdue prostitution that all the vice crusades ever mounted.’ “

“John, in 1977, out of sheer boredom, had taken to watching preachers on TV. It was something else to do besides sleep and program dreams…. He somehow became a big fan of the Reverend Billy Graham. At first he watched only for entertainment. Then, one day, he had an epiphany — he allowed himself to be touched by the love of Jesus Christ, and it drove him to tears of joy and ecstasy. He drew a picture of a crucifix; he was born again, and the experience was such a kick he had to share it with Yoko.

“John and Yoko sat in front of the TV watching Billy Graham sermons. Every other sentence out of John’s mouth was Thank you, Jesus or Thank you, Lord.  Then, as quickly as Jesus came, Jesus went, and John apologized to Yoko for subjecting her to Billy Graham.”