“John O. Dolson died in a military hospital in Gettysburg, Pa., on Sept. 3, 1863, two months after the Civil War’s bloodiest battle left him with a punctured lung while engaged in a critical Union counterattack on the rock-strewn hill known as Little Round Top….

“Dolson was wounded with a Minie ball to the lung on the second day of the Gettysburg clash, but we don’t know much more. In fact, history lost track of him for nearly 150 years.

“But in 2006, researchers unearthed a major typo as they combed through records from Camp Letterman, the military hospital where Dolson died.

“Dolson was buried near the hospital until 1871, when Southern states raised funds to disinter and return Confederate war dead. That’s when the sharpshooter from Minnesota headed south by accident.

“Dolson joined 136 Confederate soldiers whose remains were buried at Oakwood Cemetery in Raleigh, N.C. A headstone in Oakwood was chiseled with the name John O. Dobson of Company A, 2nd North Carolina Infantry — even though muster rolls from the Confederate unit list no such man.

“When researchers a decade ago realized it was actually Dolson buried there, a new, rounded headstone — signifying a Union soldier — was added to the sea of pointed stones marking Confederate soldiers’ spots.

“At 2 p.m. [today] in Richfield’s Veterans’ Park [near Minneapolis], a ceremony will be held to unveil a new marker explaining Dolson’s mislaid remains. They still may be in North Carolina, but now both the old ‘Dobson’ gravestone and a new plaque tell his story at a park in his hometown….”

— From “Two Minnesotans at war, both teens, were witnesses to history” by Curt Brown in the Minneapolis Star-Tribune (May 28)

Josh Shaffer of the N&O was on this story as it unfolded in recent years.

“WALLACE, N.C. — Wallace Klan No. 38 recently staged a big parade and naturalization ceremony. The parade was formed at the high school building in the light of a fiery cross and marched through the principal streets of the town, returning to the athletic field near the high school.

“A large class of candidates was naturalized [initiated], the impressive ceremony being open to the public. One of the National lecturers then discussed the ideals and principles of Klankraft. It was heard with interest by the large audience.

“After the ceremony and address, a banquet was served at the Klavern. The table was decorated with American flags and electric crosses. Several brief talks were made by Klansmen and music was furnished by the Wallace Klan band.”

— From “Stage Parade and Naturalization” in the Fellowship Forum (date unknown; clipping found at flea market)

The Fellowship Forum was a national Klan publication popular in the 1920s.

Memorial Day is just around the corner.  Flags will be flown, veterans remembered, and grills fired up.  Here are a few recipes to help you out with your weekend festivities. 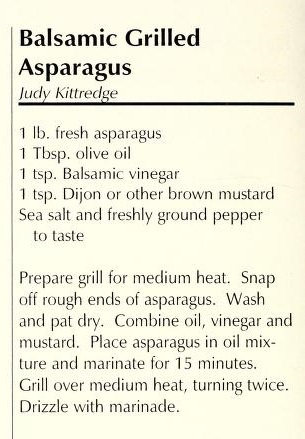 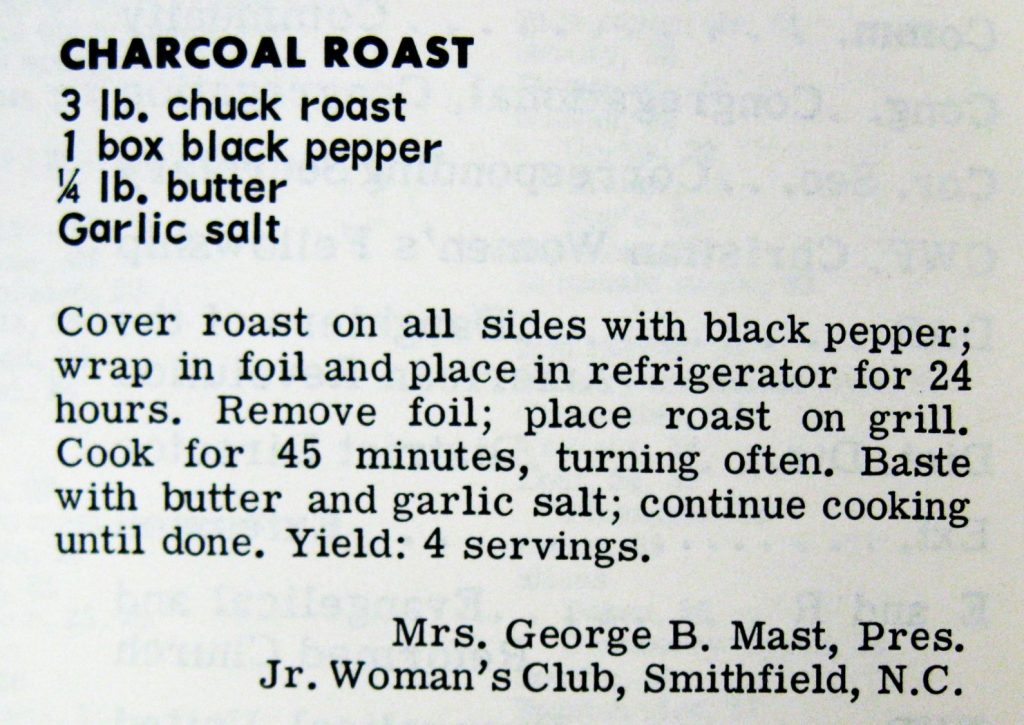 Charcoal Roast from Favorite recipes of the Carolinas : meats edition, including poultry and seafood. 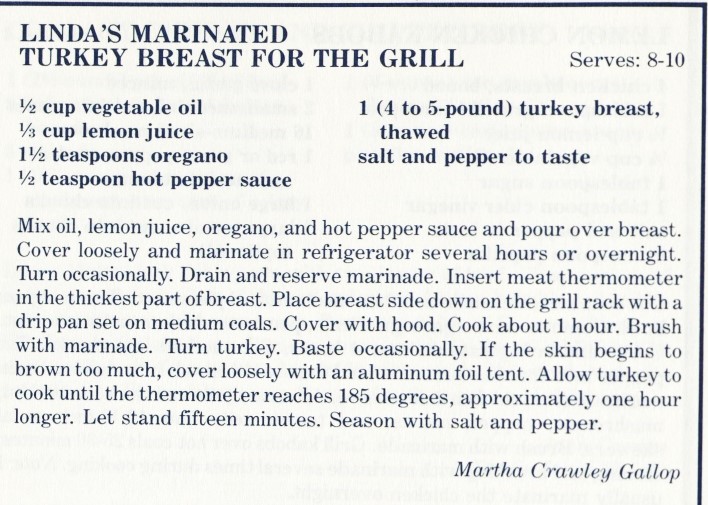 Linda’s Marinated Turkey Breast for the Grill from A dash of Down East. 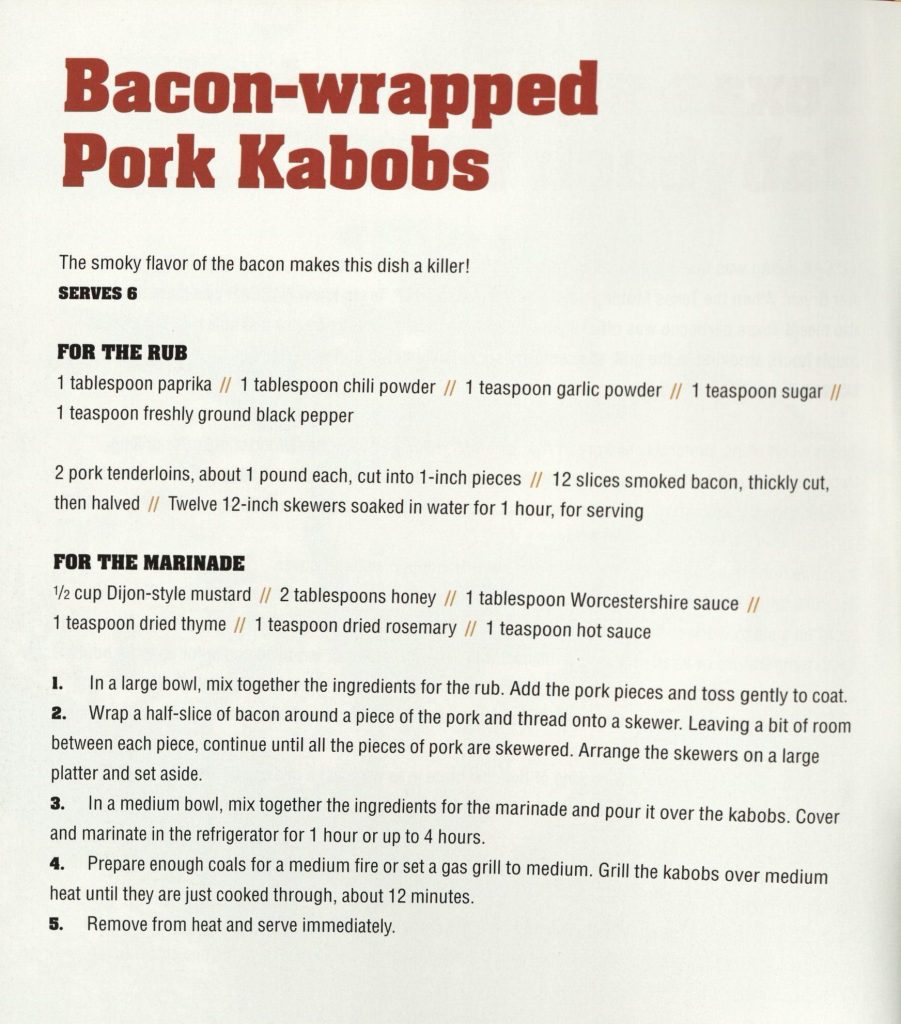 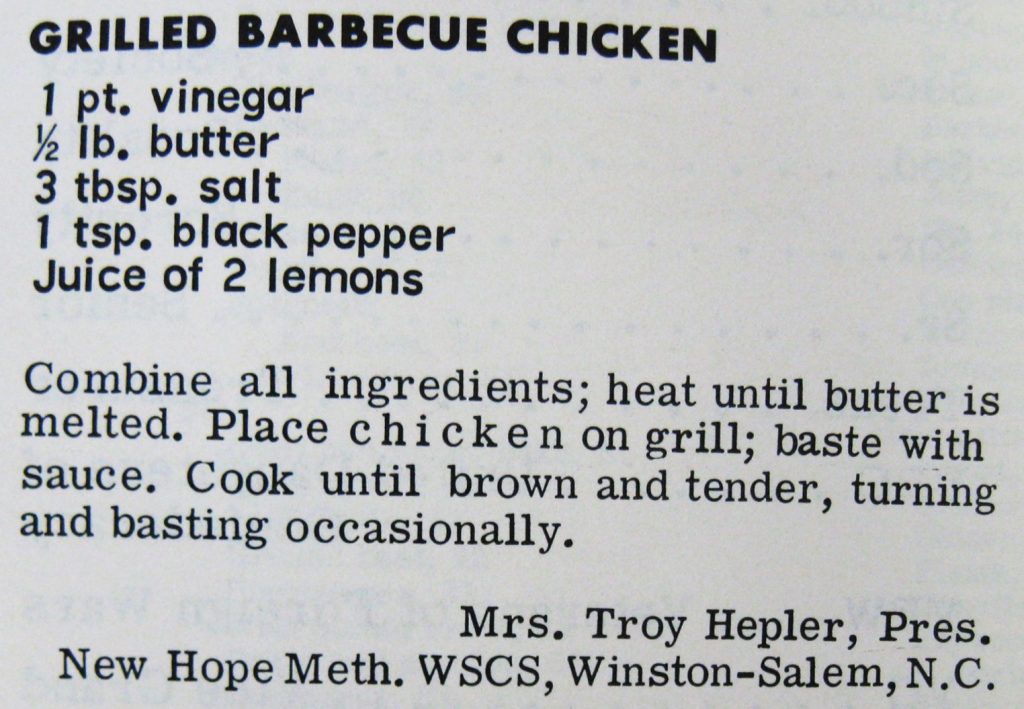 Grilled Barbecue Chicken from Favorite recipes of the Carolinas : meats edition, including poultry and seafood. 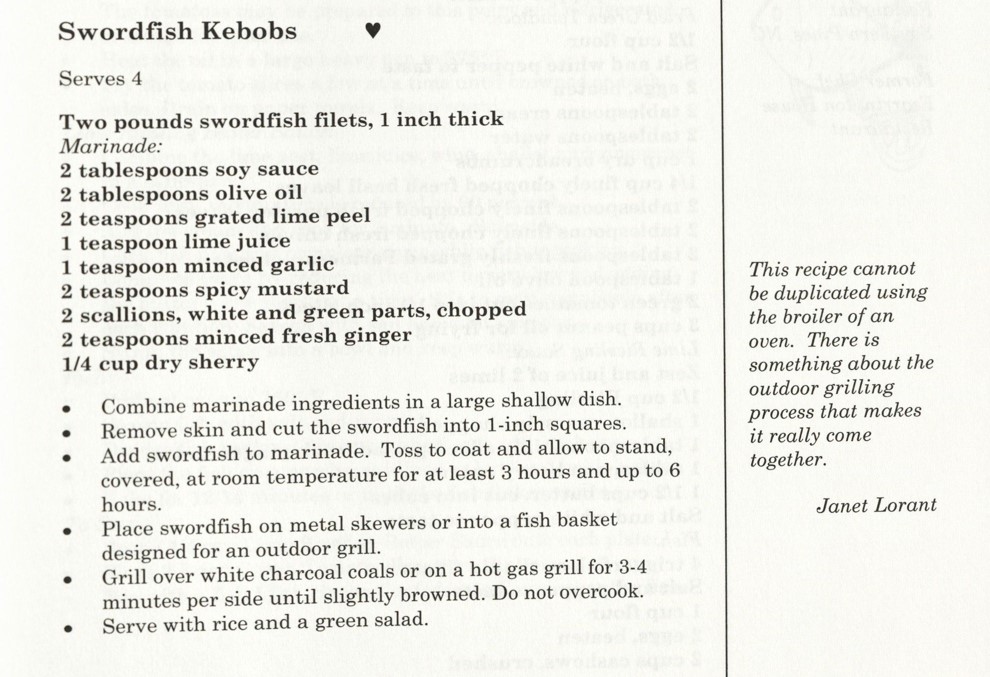 Swordfish Kebobs from Flavors of Fearrington : the village where neighbors care and community is alive.

On this day in 1933: Sen. Josiah Bailey of North Carolina takes the floor to note that “Even the mules in the South wear shoes.”

Bailey’s is one of many indignant responses to Secretary of Labor Frances Perkins’ characterization of the South as “an untapped market for shoes. . . . A social revolution will take place if you put shoes on the people of the South.”

Our May Artifact of the Month is the state-of-the-art IBM Personal Computer AT, IBM’s second-generation PC. 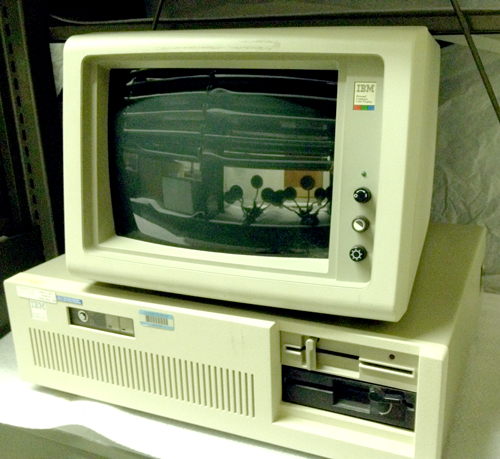 While this computer may seem like a mammoth in comparison to the latest MacBook Air, it was IBM’s streamlined and state-of-the-art release in August of 1984. In fact, AT stands for Advanced Technology. Advanced, high-technology features of this computer include: 80286-based processor with 265k RAM, one 1.2-Mbyte floppy disk, and high-capacity diskette and fixed-disk drives. When it first went on sale, all this and more could be had for the low, low price of $3,995!

If the RAM-and-bytes jargon doesn’t make sense to you, we’ll simplify: this computer was pretty high-tech for its time, and it was designed for professional applications, office environments, and personal productivity. This computer in particular was used in an office in Davis Library during the first decades of automated record keeping and online searching. 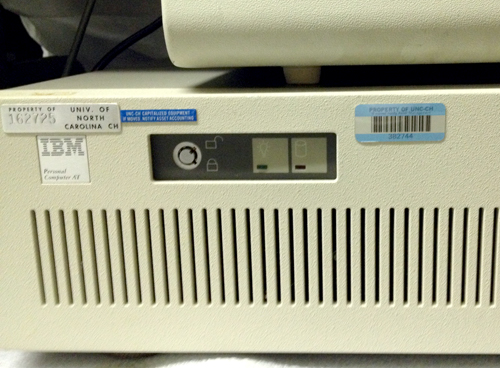 To put technology growth into perspective: In August of 1984, the IBM Personal Computer AT was released with a memory capacity of 256K RAM. In 1995, the average RAM of most computers was 2 Megabytes. Modern-day RAM is anywhere between 4-12 Gigabytes. In other words, from 1984 to 2016 there was a million-fold increase in computer memory capacity. That’s pretty astounding.

UNC has close ties to IBM because of Fred Brooks, computer architect and founder of UNC’s Computer Science department. Brooks managed the development of IBM’s System/360 family of computers that revolutionized IBM computing, made advancements in capability, and allowed machines to be upward-compatible. Brooks also facilitated the transition of the 360-series from a 6-bit byte to an 8-bit byte. Simply put, a byte is the number of bits used to encode a single character of text in a computer, and for that reason it’s the smallest addressable unit of memory in computers. The switch from a byte composed of 6 bits to that of 8 bits allows us to use lowercase letters.

If, like us, you’re thankful that computer text is not all caps and doesn’t read as if someone is yelling at you, give Fred Brooks a nod if you ever see him on campus.

On this day in 1980: Charlotte Motor Speedway makes the mistake of scheduling a Waylon Jennings concert on qualifying day for the World 600 stock-car race. Eight people are injured, 3 are arrested and 175 riot police are called out.

“We just got the wrong mix of people,” speedway president H.A. “Humpy” Wheeler will recall. “We had God-fearing, flag-waving, red-white-and-blue folks out there with the motorcycle boys.”

“[George] Washington’s complaints only increased in the southern states [during his first-term tour of all 13 states]. Instead of comfort, he experienced martyrdom, at least in the small towns along the road.

“In April 1791 he crossed into North Carolina from Virginia hoping to find an inn where both he and the horses could recover from an unpleasant day of traveling in the rain. He had no luck. The single tavern open for business was so repellent that Washington could not bring himself to suffer a single night’s stay. The inn, he explained in his diary, ‘having no stables in which the horses could be comfortable, & no Rooms or beds which appeared tolerable, & every thing else having a dirty appearance, I was compelled to keep on to Halifax.’

— From “George Washington’s Journey: The President Forges a New Nation” by T.H. Breen (2016)

“Indifferent” may have been Washington’s pejorative of choice for North Carolina inns, but he was more memorably dismissive of Charlotte — and Greenville — as “trifling.”

“On July 25, 1703, Thomas Bouthier filed a legal complaint… that Susannah Evans of Currituck, not having the fear of God before her eyes, but being led by the instigation of the devil, did devilishly and maliciously bewitch, with the assistance of the devil, afflict the body of [his wife] Deborah Bouthier with mortal pains that caused her death….

“Cornelius Jones, a well-known sea captain, served as foreman of the grand jury. Captain Jones had been well informed of the atrocities in Salem, Mass., during his travels to the New England colonies. He convinced the jurors to dismiss the charges of witchcraft. His political motive was to avoid the hysteria that had occurred in Salem [in 1692]. Even though Susannah was found not guilty, it was reported the townsfolk continued to keep their distance from her….”