Every artifact tells a story. One of the most dramatic stories represented by one of our artifacts is the story associated with our June Artifact of the Month: Elisha Mitchell’s pocket watch. 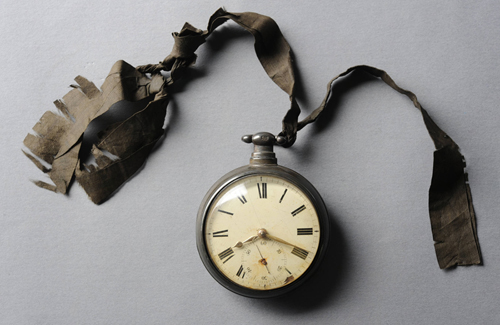 Elisha Mitchell was a professor of geology, mineralogy, and chemistry at UNC in the 19th century. In 1828 he observed a peak in the Black Mountain range that he believed to be the highest point in the eastern United States. He returned three more times to gather data in the 1830s and 40s.

In 1855, Mitchell entered a two-year public debate with state senator Thomas Clingman — a former student of Mitchell’s — about the resolution of the highest-mountain question. In an effort to settle the matter, Mitchell made a final, fatal trip to the Black Mountains in 1857.

On that trip, he slipped, hit his head on a rock, and fell into a pool at the base of a waterfall. The blow to his head knocked Mitchell unconscious and he drowned in the pool.

… And that’s where our artifact comes in.

Mitchell carried this pocket watch on his journey and it still tells the time of his supposed death: June 27, 1857, 8:19.

The Mitchell pocket watch and the state parks

Mitchell’s life was cut unduly short, but his legacy is part of the North Carolina landscape. The mountain Mitchell identified was eventually verified as the tallest peak in the eastern United States, and it was named Mount Mitchell in his honor.

In 1916, Mount Mitchell and the land surrounding it were purchased to become North Carolina’s first state park. This year the state park system celebrates its 100th anniversary with events at every park.

In April, Gallery staff took the Elisha Mitchell pocket watch to Fort Macon State Park for an event attended by 25,000 people. In August the watch will travel to Mount Mitchell — a homecoming of sorts.

We’re delighted to share one of our favorite artifacts with audiences beyond Chapel Hill, and proud to be part of the state parks’ anniversary celebration. If you’ll find yourself near Mount Mitchell at the end of August, please join us!