On this day in 1927: High Point Mayor H.A. Moffit orders that all future public dances must stop at midnight. According to a dispatch in The Charlotte Observer, the mayor’s announcement followed “a series of four terpsichorean events staged in connection with the furniture exposition. The mayor made an exception . . . in order that the visiting furniture men might be entertained more elaborately.”

In May 1926, roughly 150 female textile mill workers from Charlotte and Gastonia paid a visit to President Calvin Coolidge in the White House. A photograph from their visit is our January Artifact of the Month.

The newspaper accounts we’ve found don’t reveal how the visit was initiated, but they do tell us that the girls and women worked hard to fund their trip, “producing plays, selling movie tickets, staging parties, making and selling candy, and in a dozen other ways” — in addition to the hard work they were undoubtedly doing in the mill.

At the White House, the delegation presented the president with Charlotte-made cloth and Gastonia spun yarns from the Chadwick-Hoskins and the Highland Park Mills. The question on everyone’s mind was whether Coolidge would meet the women personally; he hadn’t shaken any hands since his father’s death months before.

But Coolidge shook the hand of every member of the group — to the delight of the women and of newspaper headline writers, who gushed effusively:

Young Women Having Time of Their Lives
Worshiped Sunday in Same Church with President and Mrs. Coolidge

The other men in the photo are US Senator Lee Slater Overman and US Congressman A.L. Bulwinkle, both from North Carolina, with whom the delegation met. Bulwinkle also acted as the group’s official escort in Washington. 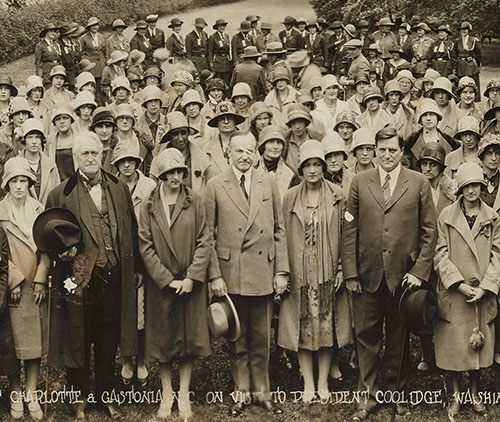 For firsthand perspective on the event, one newspaper article quotes a young women identified as “pretty 16-year-old Beulah Crouch, who, with the aid of her brother, supports her mother, younger sister and invalid brother by her work in the Nebel Knitting Mills of Charlotte.” Crouch says, “This trip has taught us many things, and one of them is how to act in a large crowd, and to be proud of our country. We shall have lots and lots to look back to in the future.”

We’re grateful to Charlotte Observer librarian Maria David for salvaging this photo and donating it to the North Carolina Collection, as well as to Lew Powell for conveying it to us. Thanks, too, to NCC Photographic Archivist Stephen Fletcher for research help and for overseeing the proper care and housing for this unique photographic treasure.

“Michael Behrent, history professor at App State, believes that the changes in how public universities are funded represent an ‘economic and political model that is hostile toward the very idea of public institutions’ — and one hostile to the teaching staff upon whose services it relies. Altha Cravey, a geography professor at UNC-CH… cites data from UNC showing that 59 percent of the faculty at Chapel Hill are now in non-tenure-track positions, versus only 12 percent in 2003….

“The future of academic work is at stake. The midcentury model of shared faculty governance in higher education is eroding, replaced by a top-down, corporate technocracy…. If current trends continue, an entire generation of academics will come of age in a world in which the gulf between the tenured and non-tenured is entrenched, in which work is precarious and low pay, in which profits flow upwards toward administrators….

“Black Mountain College reminds us that there are other ways forward….”

— From “The most influential college you’ve never heard of, why it folded and why it matters” by Sammy Feldblum at Scalawag (Aug. 24)

Feldblum makes a thoughtful and important argument, however quixotic.

On this day in 1918: A spinal meningitis quarantine shuts down Charlotte’s amusement places, churches, schools and public gatherings. The quarantine will be lifted after two weeks, but 10 months later the city is again quarantined, this time because of an epidemic of influenza.

“There are, of course, other regional favorites such as Texas beef barbecue, Kansas City barbecue with its thick, tomato- and molasses-based sauce, and the whole-hog North Carolina barbecue featuring a vinegary sauce.

” ‘But the Memphis style is “right up there at the top,” ‘ said [Linda] Orrison, National Barbecue [& Grilling] Association president.

” ‘As far as the consumer is concerned, that’s the one word that solidifies barbecue to them.’ ”

— From “BBQ spots across U.S. lay claim to ‘Memphis’ name” in the Memphis Commercial-Appeal (Jan. 20)

On this day in 1862: Pvt. D.L. Day, Co. B, 25th Massachusetts Volunteer Infantry, writing in his diary at Hatteras Inlet:

“Witnessing boat collisions and wrecks is getting old and the boys are amusing themselves by writing letters, making up their diaries, playing cards, reading old magazines and newspapers which they have read half a dozen times before; and some of them are actually reading their Bibles.

“Of all the lonely, God-forsaken looking places I ever saw, this Hatteras island takes the premium. It is simply a sandbar rising a little above the water…. I don’t think there is a bird or any kind of animal, unless it is a dog, on the island, not even a grasshopper, as one would have to prospect the whole island to find a blade of grass, and in the event of his finding one would sing himself to death…. It is the key, or gate-way, to nearly all of eastern North Carolina.”

“Students at elite colleges are even richer than experts realized, according to a new study based on millions of anonymous tax filings and tuition records.

“At 38 colleges in America, including five in the Ivy League – Dartmouth, Princeton, Yale, Penn and Brown – more students came from the top 1 percent of the income scale than from the entire bottom 60 percent.”

— From “Some Colleges Have More Students From the Top 1 Percent Than the Bottom 60. Find Yours.” in the New York Times (Jan. 18)

By this standard the widest wealth imbalance in North Carolina is among students at Elon University, where 14 percent come from the top 1 percent vs. 9 percent from the bottom 60 percent.

At UNC Chapel Hill the ratio is 6 percent of students from the top 1 percent to 21 percent from the bottom 60 percent. 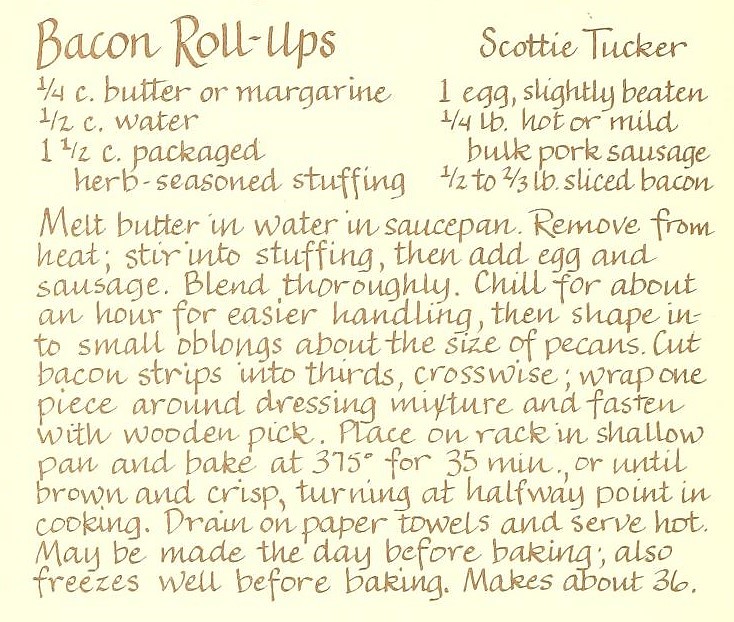 Japanese Bacon Wrapped Shrimp from Cooking on the cutting edge. 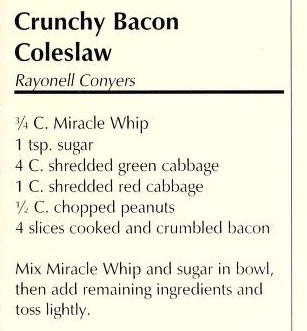 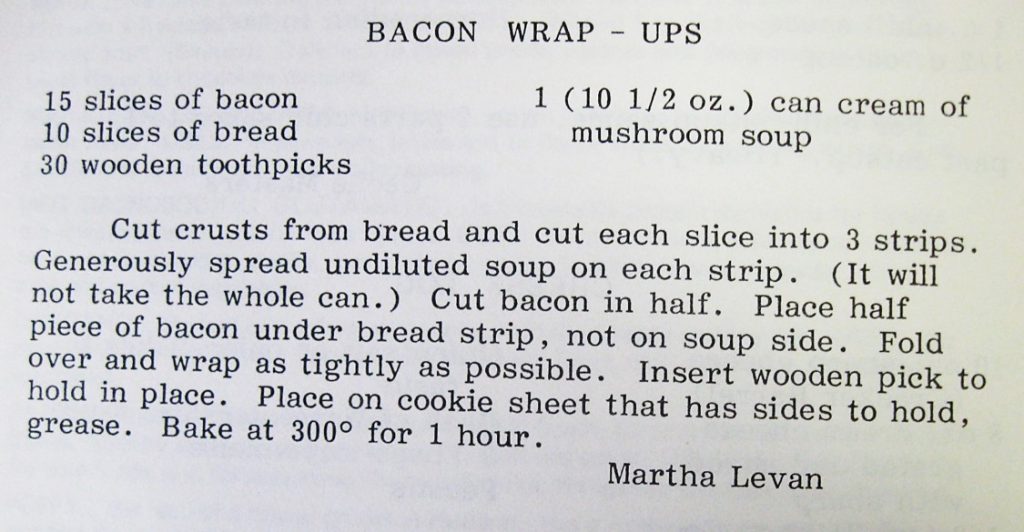 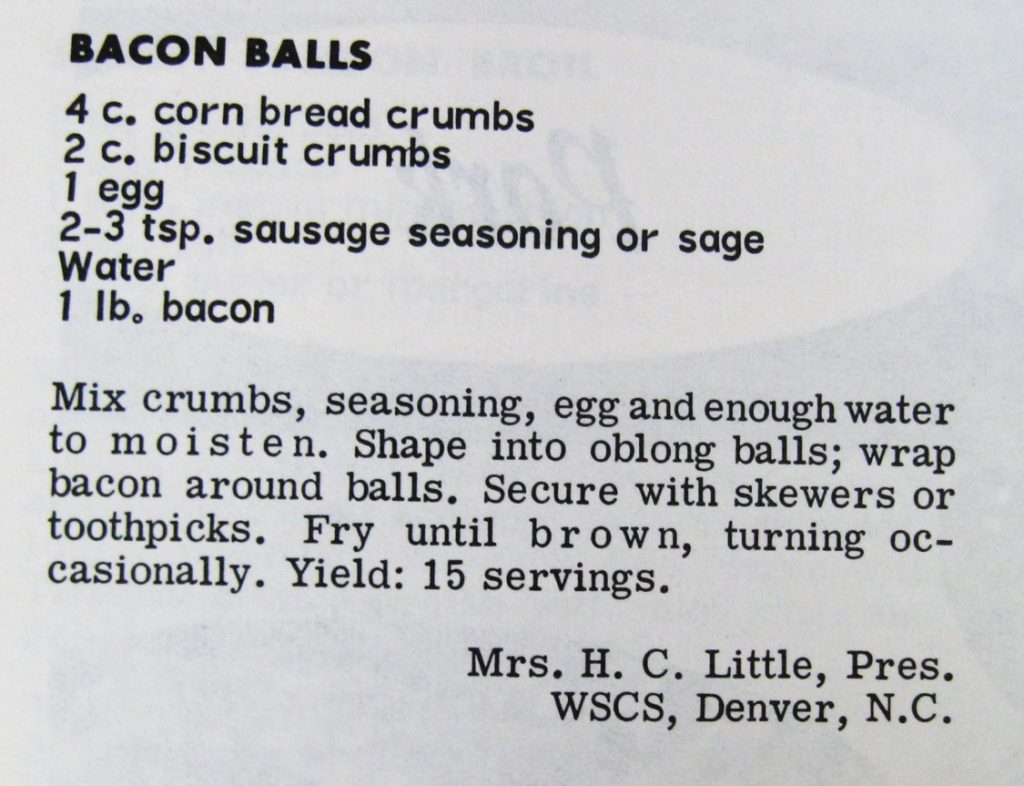 Bacon Balls from Favorite recipes of the Carolinas : meats edition, including poultry and seafood.

“Woman’s College alumna Virginia Tucker ’30 [was] a trailblazer for the female mathematicians — known as ‘computers – highlighted in ‘Hidden Figures.’

“Tucker was one of five women to join the first human computer pool at Langley Memorial Aeronautical Laboratory in 1935.

“When World War II broke out, more women were recruited as computers to conduct wind tunnel testing and other critical research. Tucker recruited heavily at institutions across the East Coast. According to Margot Lee Shetterly, author of the book that inspired the movie, what is now UNC Greensboro graduated one of the largest cohorts of women who went on to work as human computers.

“By the early 1940s, Tucker was the head computer…. Shetterly writes:

“ ‘Over the course of twelve years, Virginia Tucker had ascended from a subprofessional employee to the most powerful woman at the lab. She had done so much to transform the position of computer from a proto-clerical job into one of the laboratory’s most valuable assets. … Between 1942 and 1946, four hundred Langley computers received training on Tucker’s watch.’

“In 1947, Tucker left civil service for a position as an aerodynamicist at Northrop Corporation, [but] her legacy continued to pave the way for female mathematicians, including the three African-American women whose stories are told in the movie.’ ”

How an archivist struck gold while sifting through class notes.

“GATESVILLE, N.C. — Gates County historian Linda Hofler pointed to a tiny place on the map where the boundary between North Carolina and Virginia turns just a little.

“About a half-mile is all.

“ ‘It’s one of those quirks, and you wonder why in the world,’ said Hofler, who taught history in Gates County… for more than 30 years.

“Well, there is a story behind that entire line, including the southward jog, that mostly involves collecting taxes and avoiding swamps….”

— From “Along North Carolina-Virginia border, a tiny turn in the map and a history of lies and controversy” by Jeff Hampton in the Virginian-Pilot (Jan. 2)