“In 1996, I got a call from a friend who was (and is) a historian in North Carolina, Dick Kohn. Prof. Kohn suggested that I might be able to help a young Army officer completing his Ph.D. studies at the University of North Carolina. Kohn was concerned that Maj. H.R. McMaster might soon be in big trouble with senior leadership….McMaster was about to publish a critical book about the Vietnam War….

“In our telephone discussions, McMaster was very polite, but he did not follow my suggestions about toning down his criticism. It was clear he was extremely smart, very well-read, a fine researcher and a man of strong convictions. Later I predicted his career would suffer. I was wrong….”

— From “One of the Army’s best is about to face his greatest challenge” by Perry M. Smith in the Augusta Chronicle (Feb. 25)

“Comparing race relations in the early 20th century to what they had been like after Reconstruction, a [white] North Carolinian lamented the extent to which blacks showed disdain for the old customs, monopolizing, for example, the inner side of the sidewalks once deemed the white man’s ‘right of way.’

“This was no small matter. Such ‘assertions of independence’ and ‘racial equality,’ if tolerated, were bound to have disastrous consequences.

” ‘When the whites yield in what would be usually called “trifles,” they may some day discover that little by little these trifles have grown into “thunder-bolts.” ‘ ”

This month’s Artifact of the Month is the plaque that appeared on the building now known as Carolina Hall. 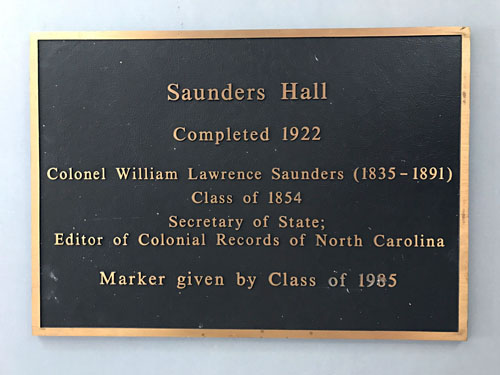 Completed in 1922, the academic building originally got its name from class of 1854 graduate William Lawrence Saunders. Leading into 2015, UNC students objected to Saunders’ reported membership in the Ku Klux Klan and issued a call to action. According to the News and Observer, the UNC Board of Trustees deliberated for “about a year,” eventually voting 10-3 to select a more “unifying name.”

Even before the Board’s deliberation, some students proposed that the building should honor anthropologist and writer Zora Neal Hurston. The students advocated for that name because as an African American woman, her identity contrasted the issues of racism and sexism perpetuated by having Saunders’ name on the building. Hurston also had ties to the University: in 1939 she attended writing classes at UNC with playwright Paul Green. Some activists used hashtags like “#HurstonHall” on Twitter, while others made T-shirts like this one, from the University Archives’ digital T-shirt archive. 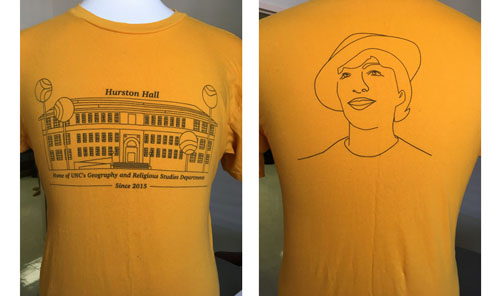 On May 28, 2015, the UNC Board of Trustees proceeded with renaming Saunders Hall to Carolina Hall. The Board also issued a sixteen-year moratorium on renaming historic buildings. According to The Daily Tar Heel, some activists critiqued the moratorium as well as the selection of the name “Carolina Hall.”

In a May 2015 article of the Daily Tar Heel, senior Judy Robbins was quoted as saying, “Renaming it Carolina Hall is automatically silencing all of the students who worked on this and also all students of color who have ever attended UNC and ever will attend UNC.” Carolina Hall officially reopened in the fall of that same year with a new name plaque. The old Saunders Hall plaque came to the North Carolina Collection Gallery.

On November 11, 2016, a new exhibit opened exploring the history of the building’s name, William Saunders, and the Reconstruction era. 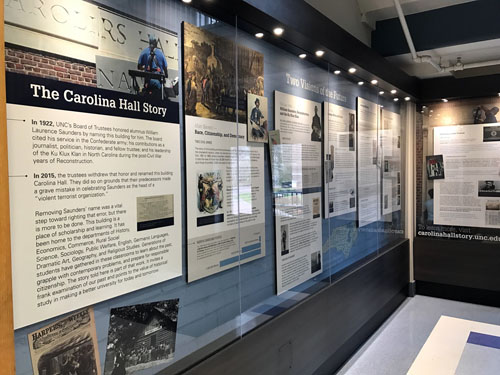 “Rather than depending on large, merchant-capitalized manufactories,  a flexible system [used during the Revolutionary War] relied primarily on independent farm families for production. Women and children could manufacture clothing and other products at home when time permitted, and either merchants or the state government would purchase the finished goods to be distributed where needed. These farm families succeeded so well that large manufactories seemed less appealing to potential investors.

“When Joseph Hewes of [Edenton] North Carolina considered investing in a linen manufactory, he was dissuaded by a Philadelphia factory manager who informed him that ‘small manufactories set up by private persons in their own families would be much more profitable both to the adventurers and to the community in general than large ones established by the public or by companies.’ ”

— From “Manufacturing Revolution: The Intellectual Origins of Early American Industry” by Lawrence A. Peskin (2010)

It would be 1814 before Michael Schenck built North Carolina’s first textile mill,  on a fork of the Catawba River near Lincolnton. It manufactured cotton yarn, not linen.  textile mill in North Carolina was in operation around 1815 by Michael

“Black bears and North Carolinians have tussled over space for centuries. While traveling through the western part of the state in 1774, naturalist William Bartram complained about them in his journal, writing ‘the bears are yet too numerous.’ American pioneers hunted them for food and for sport, often to excess — when trapper ‘Big Tom’ Wilson died in Asheville in 1908, his obituary bragged that he had killed 110 bears. All of this barely dented their numbers.

“Starting in the 1920s, though, development and deforestation began taking their toll. When a midcentury bout of chestnut blight decimated the bears’ food supply, they were already struggling. By 1970, there were only about 1,500 left in the state, and North Carolina conservationists began setting aside protected land to bring their numbers up, but things still looked grim.

“Then came the 1990s, and the housing boom. New developments were perfect safe spaces for bears, full of food and birdseed and free from hunters…. In 1993, the N.C. Wildlife Resources Commission got 33 calls about human-bear encounters. In 2013, they got 569.

“[Today] somewhere around 8,000 black bears range around western North Carolina, and many make Asheville part of their meandering….The scientists behind [N.C. State’s] Urban-Suburban Bear Study are interested in figuring out this new habitat’s ‘social carrying capacity’ — exactly how many of these new neighbors the human residents of the city are willing to tolerate….”

— From “The Civilized Black Bears of Asheville, North Carolina” by Cara Giaimo at Atlas Obscura (Oct. 14)

“Robert Kennedy’s Justice Department weighed in against a reduction in [Junius] Scales‘s sentence [for being a member of the Communist Party]….But Bobby was changing. He had begun to distinguish saying provocative things from actually doing something wrong.  He was more open to admitting a mistake. He was also less afraid to break with the unbending J. Edgar Hoover, who insisted Scales stay behind bars until he named his ex-comrades….

“[After 15 months in prison] Scales would be let out on December 24, 1962, with a guard on duty yelling to him, ‘We just got a telegram from Bobby Kennedy, and he says we gotta get you home by tonight in plenty of time for Christmas.’ ”

Desserts from Recipes we love to cook. 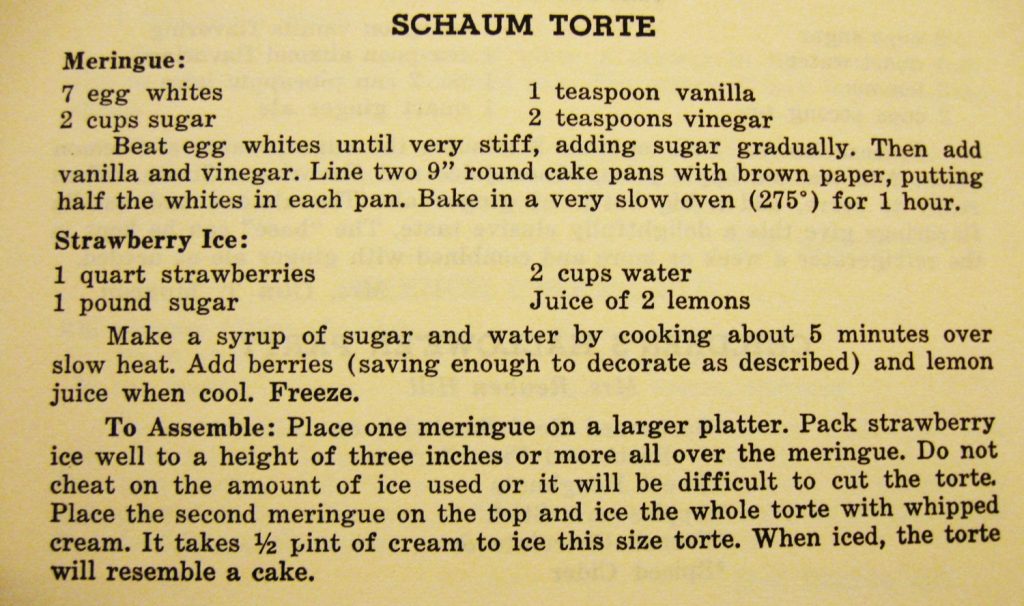 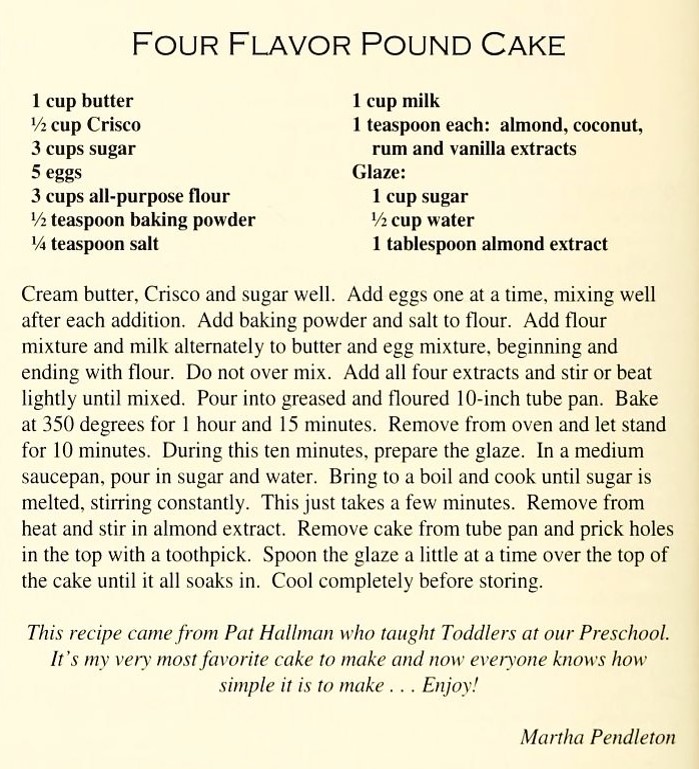 “The writer [Thomas Wolfe] spent the last years of his life at the Chelsea. In Room 829, he was known to have produced the manuscript for the novels ‘You Can’t Go Home Again’ and ‘The Web and the Rock,’ which were published after he died in 1938.

“He drew great inspiration from roaming the hallways, but in May 1938, he was looking for an excuse to leave as the summer heat grew so intense that ‘he could smell all seven million inhabitants’ of New York, Sherill Tippins wrote in ‘Inside the Dream Palace: The Life and Times of New York’s Legendary Chelsea Hotel.’

“After accepting an invitation to speak at Purdue University, she wrote, he spent his last few days at the hotel writing his speech, about his belief that, amid the Depression and the rise of Nazism in Germany, he had a responsibility to society to inspire hope. He called the speech ‘You Can’t Go Home Again.’

“Several months later during his travels, he died of tuberculosis that migrated to his brain.”

— From “From Thomas Wolfe to Sid Vicious, Artists and the Chelsea Hotel” by Amisha Padnani in the New York Times (Feb. 14)

On this day in 1960: On “The Danny Thomas Show,” Sheriff Andy Taylor, played by Andy Griffith, arrests nightclub performer Thomas for speeding through sleepy Mayberry, N.C.

“Ms. Smith is but one of many Texans and former Texans named Texas. It’s not their nickname but the formal name given to them by their parents that appears on their birth certificates, IDs and, in some cases, obituaries….None of the other states I’ve lived in had such a hold on its residents that people felt compelled to name their children after it. ”

“The family of James Daniel (1790?-1870?) and Mary Ashley (1795?-1880?) Royster were residents of Raleigh, N.C. The couple had eight children, all named in a rather unusual fashion. According to his great-grandson, Henry P. Royster (the donor of a portion of these papers), James Royster had grown ‘weary of hearing names around the house such as Tom, Dick, and Harry.’  Thus started the ‘American states series’  with the eight Royster children being named after states. The boys were [Pulitzer-winning journalist] Vermont Connecticut, Iowa Michigan, Arkansas Delaware, Wisconsin Illinois, and Oregon Minnesota; the girls were Louisiana Maryland, Virginia Carolina, and Georgia Indiana.”

— From “Royster Family Papers, 1840-1979” in the Southern Historical Collection

Apparently the Roysters didn’t find “Texas” as appealing as do, well, Texans. Or maybe they just ran out of children?