“North Carolina now has one of the most ‘progressive’ death rows in the nation. No one has been executed here since 2006, and inmates are allowed to mingle with each other and spend hours outside. They are the most well-behaved population in [Central Prison], officials say, largely because they have become a community….”

Early North Carolinians experienced many problems and frustrations with their money, and not just from having too little of it. One problem was that some of the money in circulation was fraudulent. We use this term rather than counterfeit because the problem went beyond counterfeiting — producing copies of genuine notes.

The North Carolina Collection Gallery recently acquired a “raised” note from the 1778 series of paper money. A genuine note is said to be raised when it has been altered to appear to be of higher denomination than it is.

The note below, shown front and back, at first glance appears to be worth four dollars. But reading the small print on the front — the main body of text or the vertical printing to the left — reveals that the note is worth one-fourth dollar. That’s a big difference.

Compare the genuine but raised note to an unaltered example, below, also in our collection.

The raised note is a crude job, akin to a bad Photoshop job today.

Did it pass? Maybe.

Much paper money in circulation at the time was heavily worn, significantly more so than the relatively pristine unaltered 1778 specimen shown here. The holes and other defects produced by the raising might not alarm a person used to handling rags that had to serve well into frail old age.

Secondly, people may not have bothered to read the small print, especially if they had seen this type of note before.

Third, unusual (by present standards) denominations — such as four dollars — were more common before the Civil War, and would not have raised suspicions. And there was a genuine four-dollar note in the 1778 series, although it had a motto different from that of the quarter-dollar note.

The simple printing technology of the day, devoid of anti-counterfeiting measures, certainly did little to discourage crooks. Printing technology improved, but so did the skills of the charlatans. Raising genuine notes persisted well into the 19th century as a minor form of easy money making. Today, note raising is a seldom-encountered form of fraud. Modern crooks seem to do just fine with plain counterfeiting.

“The Grand Old Party” seems an especially appropriate nickname for North Carolina Republican Party today—the 150th anniversary of the formal organization of the party in the Tar Heel State.

Led by North Carolina Standard editor W.W. Holden, a number of prominent white citizens who had been pre-Civil War Whigs, anti-secessionists, or one-time members of the Peace Party joined with African Americans eager for a long-denied voice in the governance of the state in organizing a convention in Raleigh on March 27, 1867. The purpose of the meeting was to demonstrate to Congress and the nation that North Carolinians were loyal and ready for full readmission to the Union. A second goal was to wrest power from the Conservative party forces that governed the state. The 147 delegates in attendance collectively represented 56 counties in what was the first political meeting in North Carolina with full participation by both black and white citizens. Alexander H. Jones of Henderson, a strong advocate of voting rights for African American males, was elected president of the convention. Two white and two black vice presidents and one white and one black secretary were also chosen.

Delegate Robert Paine Dick of Greensboro proposed that the convention should proceed with organizing the Republican Party in North Carolina. But not all delegates supported that name for the organization. Several, including Daniel R. Goodloe and Benjamin S. Hedrick, argued for “Union Party”, saying that it would be more acceptable to many North Carolinians the organization hoped to attract. But the prevailing sentiment was for “Republican Party.” The next day, May 28th, in the first of a series of resolutions the delegates passed, it was resolved:

That in view of our present political condition, our relations to the National Government and the people of all sections of the country, we do this day with proud satisfaction unfurl the brilliant and glorious banner of THE REPUBLICAN PARTY and earnestly appeal to every true and patriotic man in the State to rally in its support.

The March 30, 1867, issue of the Raleigh Tri-Weekly Standard provides a detailed account of the two-day convention. Digital access to this issue of the Standard is available via Chronicling America.

Several years of the Standard and a number of other North Carolina newspapers have been digitized and made available by the North Carolina Collection thorough its participation in the Chronicling America newspaper digitization project coordinated by the Library of Congress and the National Endowment for the Humanities.

“Native Americans were involved in the slaving enterprise from the beginning of European colonization.  At first they offered captives to the newcomers and helped them develop new networks of enslavement…. As Indians acquired European weapons and horses, they increased their power and came to control an ever larger share of the traffic in slaves.

“In the Carolinas colonists took tens of thousands of Indian slaves and shipped many of them to the Caribbean. In the period between 1670 and 1720, Carolinians exported more Indians out of Charleston than they imported Africans into it….”

— From  “The Other Slavery: The Uncovered Story of Indian Enslavement in America” by Andres Resendez (2016) 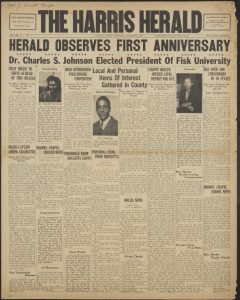 “[An] obstacle to establishing large manufacturing projects during the [Revolutionary War] was the scarcity of labor…. Because the existing manufacturing base was so small, relatively few Americans had the needed skills.

“This was particularly true away from the large cities. When North Carolina’s revolutionary government attempted to set up iron works, it had enormous difficulty, despite offering generous bounties to anyone who produced good iron and even sending a labor agent to Philadelphia to convince workers to move south. The agent reported back that ‘such is the demand for workmen in every branch of the iron manufactory and the wages so very extravagantly high that men who have any pretension to skill in the business cannot be prevailed upon to leave home.’ ”

— From “Manufacturing Revolution: The Intellectual Origins of Early American Industry” by Lawrence A. Peskin (2010)

“[In 2006] the company reported its first full-year sales declines in the U.S. Domino’s went down before the economy did, and it stayed there awhile. The pizza remained cheap, but the recipes and ingredients hadn’t kept up with the foodie movement. And the company had abandoned a key marketing tool — its 30-minute guarantee — in the wake of several accidents, one fatal, which had led to two lawsuit verdicts that cost the company millions of dollars.

“Then, in the spring of 2009, came the moment dreaded by every fast-food chain of the YouTube era: a video of workers doing something gross or illegal. Or in this case, both: A Domino’s employee at a store in [Conover] North Carolina filmed another putting cheese up his nose and adding snot to a sandwich. The video went viral, leading the health department to shut down the restaurant temporarily. Domino’s had the two employees arrested for tampering with food (the orders never left the store and both workers received probation). J. Patrick Doyle, the president of U.S. operations, recorded a two-minute apology. That video didn’t go viral.”

— From “Domino’s atoned for its crimes against pizza and built a $9 billion empire” by Susan Berfield at bloomberg.com (March 15)

“Richard Nader, a concert promoter, recalls a story Berry told him about a show he had played in Fayetteville, North Carolina [in the 1950s].  After agreeing on a fee of $750, Berry made the 800-mile trip from St. Louis only to find a audience of 20 teenagers in a seedy ice-cream parlor. Berry played the show, only to be handed at the end of the night a fee of $1.75 and a list of expenses. ‘[The promoter] had everything down there,’  Nader recalled Berry saying, ‘down to the light bulbs.’

“It was a lesson that would shape Chuck Berry’s view of the music business from then on.”

–– From “Brown Eyed Handsome Man: The Life and Hard Times of Chuck Berry” (2002) by Bruce Pegg

Chuck Berry died Saturday. He was 90.

“The North Carolina Collection at Pack Library [in Asheville] currently has over 3,650 postcards….

” ‘It’s unusual for a library of this size to have a postcard collection,’ says Terry Taylor, a member of The Friends of the North Carolina Room. ‘Some libraries have a few, but this library is making a concentrated effort to document the history of North Carolina. And it’s such a vivid history.’

“There’s a reason for local postcards’ prominence, Taylor notes: ‘That was a really popular thing from about 1905 to 1930. You could send your film to either a developer here in town or to Kodak and they would send you back prints that were on postcard stock, with a little stamp-marking on it.’ ”

— From “Greetings and salutations: A look at Asheville’s postcard history” by Thomas Calder in Mountain Xpress (March 10)

UNC’s North Carolina Collection is home to more than 15,000 postcards, about 8,000 of which were donated by the late Durwood Barber. 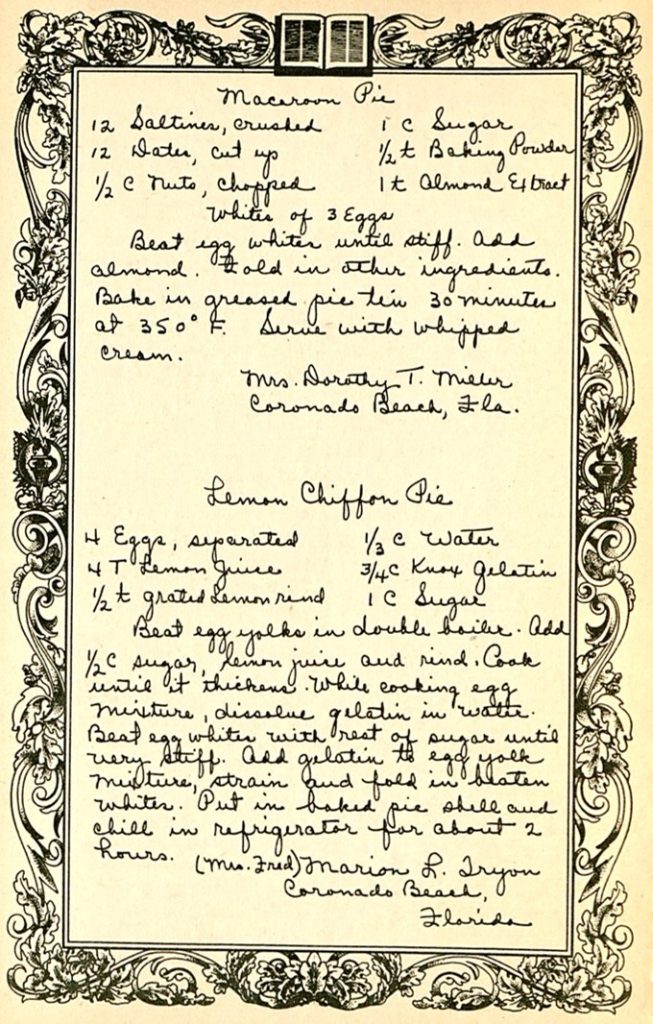 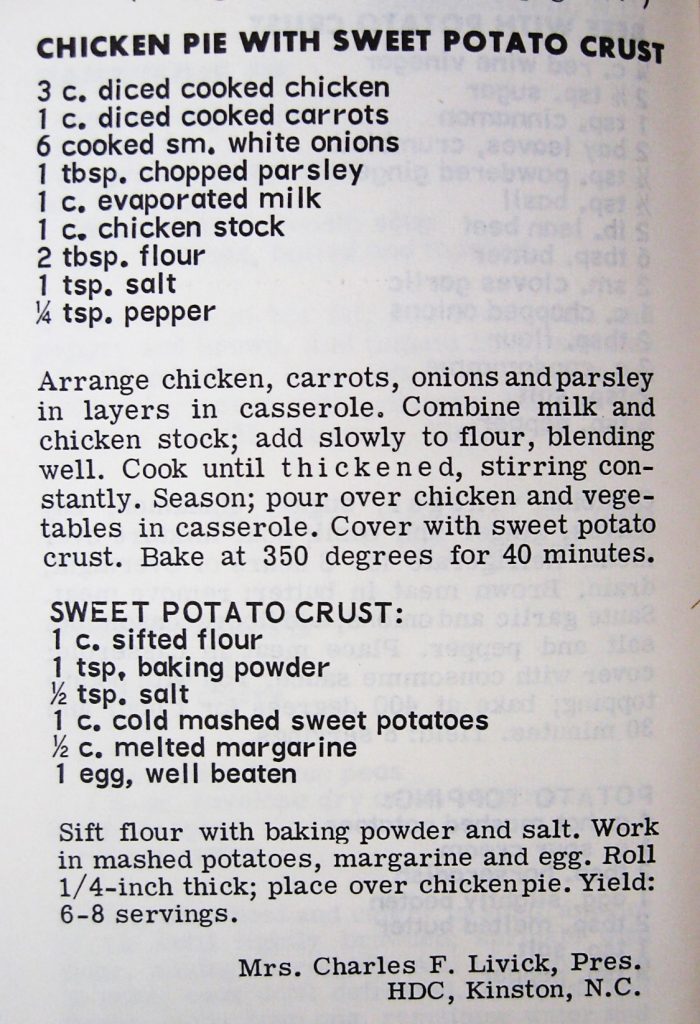 Chicken Pie with Sweet Potato Crust from Favorite recipes of the Carolinas : meats edition, including poultry and seafood.

Dinner in a Crust from What’s cook’n at Biltmore. 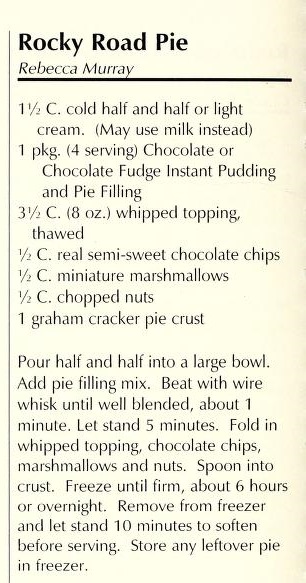 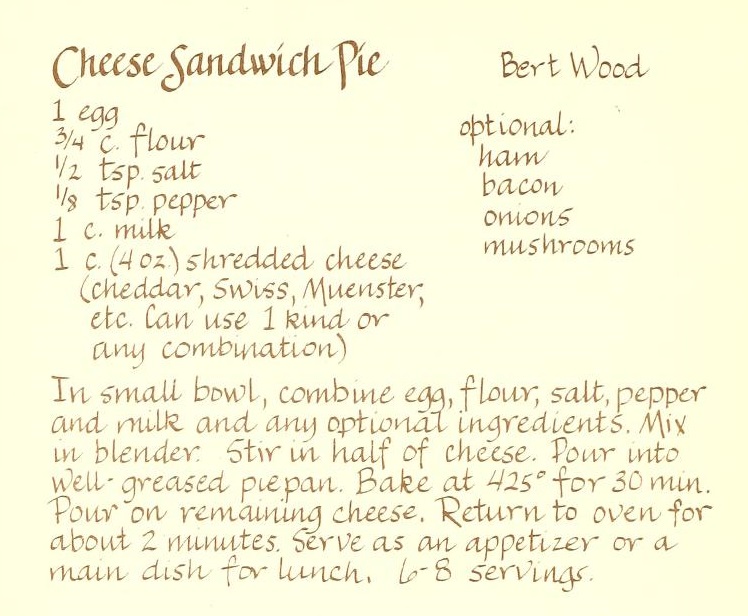