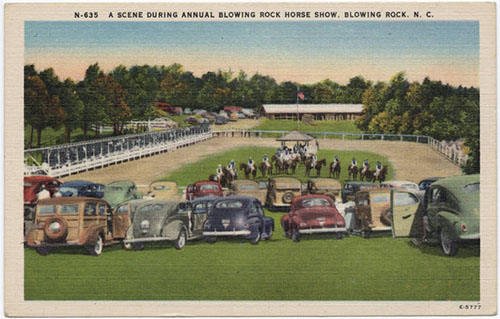 North Carolina is home to two horse shows designated as Heritage Competitions by the United States Equestrian Federation (USEF). The USEF defines a Heritage Competition as a show that has been running for an extended period of time, makes a positive and important impact on the sport, and contributes to the broader community.

Both the Blowing Rock Charity Horse Show and the Jump for the Children Horse Show received the designation in 2014. As of 2016, only 22 shows out of approximately 2,500 USEF-sanctioned shows had the prestigious Heritage Competition designation.

The Blowing Rock Charity Horse Show traces its origins to 1923, when Lloyd Manson Tate organized a horse show to entertain guests at the Green Park Hotel. Through the Great Depression, both world wars, the energy crisis and more, the show has grown and flourished. It is recognized as the oldest, continuous outdoor horse show in the United States.

In its 95th year, the Blowing Rock Charity Horse Show is a USEF ‘AA’ rated show where competitors vie for cash prizes and points within the USEF points system. For three weeks a year in the summer, competitors and spectators alike enjoy the beauty of horse sports at a historic facility high atop the Blue Ridge Mountains.

As the longest continuously-held fundraising event for Duke Children’s Hospital, the Jump for the Children Horse Show is now in its 34th year. Also a USEF ‘AA’ rated show, participants compete for cash prizes and points over six days at the Governor James B. Hunt Horse Complex in Raleigh each fall.

A thrilling spectacle at the show is the Duke Children’s Grand Prix, a jumping competition with a top prize of $50,000. A number of Olympic and International team show jumpers have taken the prize over the years.

On this day in 1831: In Raleigh, a workman who goes to breakfast in the midst of soldering leaks in the zinc roof accidentally burns down the Capitol.

Backers of Fayetteville, a larger town with livelier commerce — that was just recovering from its own disastrous fire — will lobby unsuccessfully to have the capital relocated there.