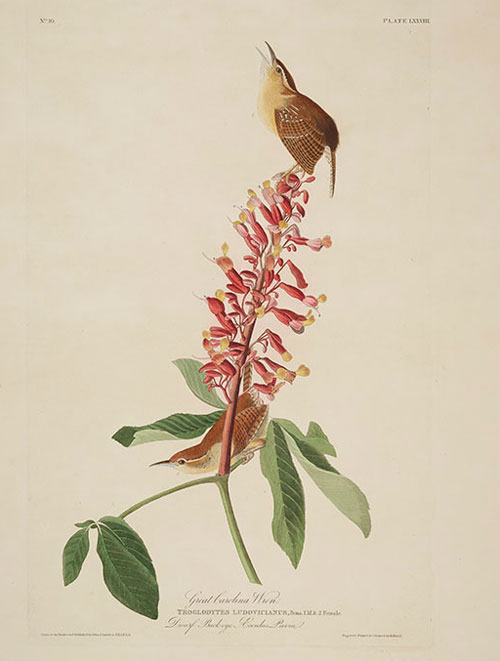 The Birds of America is one of the pinnacles of book making. In the first place, it was printed on “elephant folio” paper, entire sheets of paper in the standard size for paper at that time, about 39 1/2 X 26 1/2 inches. Between 1757 and 1784, James Whatman I and his son James II had developed a process at their mill near Maidstone, England, for making heavy smooth paper of this size. By 1826 this paper, usually folded into smaller sizes, had become a staple for printing fine details of new type-faces, maps, technical drawings, and hand-colored pictures in books. Audubon eventually engaged two London printers, Robert Havell and his son Robert Jr., to use the full size of these sheets to reproduce his illustrations of American birds. It was the most elaborate and intricate such production ever attempted. Even as the project proceeded, lithography was supplanting engraving as the technique of choice for illustrated books. Audubon had caught a wave of etching and engraving at its crest.

Eventually fewer than 200 copies of the 435 elephant folio pages were printed and each was hand-colored in the Havells’ shop. During the more than six years it took to finish this task, the sheets were issued in sets of five (67 sets in all to make the total). Subscribers included scientific societies, universities, and wealthy people in America and Europe, including the kings of France and England. Most subscribers had the sheets bound in London into four volumes of 100 sheets each (with 135 for the final volume), which were then shipped separately in tin boxes at intervals of a year or more.

Audubon insisted on using the full size of the paper in part because he intended to illustrate each bird, even the largest, in life size. Having committed himself to such large sheets, he often made use of the space available to depict his subjects grouped and also engaged in characteristic behavior. Even so, most small birds were printed from plates that were much smaller than the elephant folio sheets. In each set of five sheets, only the first used a copper plate the size of the paper; the second used a plate half that size, printed in the middle of the paper; and the remaining three used quarter-sized plates, so that half the width and height of each sheet around the centered image was left blank. UNC’s sheet with the Great Carolina Wren is an example of one of these small prints, suitable for small birds.

Like all other sheets in the Weeks’ collection, the Great Carolina Wren is no longer bound. At some time in its first 100 years this sheet had several inches of the blank paper around the image trimmed away in order to frame the image in a more balanced way. Although the trimming improved its presentation, it certainly reduced the value of this print. None of the other sheets in the Weeks’ collection, with one exception, has been trimmed so much. Despite its reduced monetary value, this example of Audubon’s Great Carolina Wren is in superb condition.

The two birds and the flower are compelling in several ways. For me, most important is the birds’ behavior. It is obviously early springtime, with the red buckeye in bloom and the male wren mounted on high to belt out his song. His full throat, fanned wings, and tense tail catch the bird’s stance so perfectly that his song almost bursts from the page. Audubon’s account of this species, in the first of his five-volume Ornithological Biography, published in 1831 soon after the elephant folio sheets, describes the song as “Come-to-me, come-to-me.” There can be no doubt that Audubon imagined the male addressing this fervor to his mate. We see her, coy as are many female birds, slipping through the branches below the male, apparently intent on her own pursuits.

The “dwarf buckeye, Aesculus pavia”, as Audubon notes in his text, favors “swampy ground” along the southeastern coastal plain. Audubon no doubt found it with the wrens in Louisiana at Bayou Sara along the Mississippi well above New Orleans. It was here, during 1821 or 1822 near Oakley Plantation (now the Audubon Memorial Park outside St. Francisville), that Audubon must have painted these wrens. His teen-aged assistant, James Mason, probably did the buckeye, although the overall composition was surely Audubon’s. At any rate, decades later Mason claimed that Audubon had promised to acknowledge his contribution in painting many of the plants in the backgrounds of the birds, although Audubon never mentioned Mason on the sheets for The Birds of America.

This dwarf buckeye is now usually called the red buckeye, to distinguish it from other dwarf buckeyes, although its scientific name remains the same. As for the bird, Audubon was the first to classify this species correctly with other wrens, by including it in the genus Troglodytes. Soon afterwards it was allocated within the wrens to the genus, Thryothorus. Alexander Wilson, Audubon’s predecessor in American ornithology, had recognized the bird’s similarity to other wrens but was confused by Linnaeus’s classification and, in his American Ornithology published in 1810-1814, placed it with creepers, in the genus Certhia. Surprisingly, the species had not been mentioned before by any American naturalist, with one exception and only in a cursory way. Wilson’s friend, William Bartram, had included it in his list of birds encountered between Pennsylvania and Florida in his classic Travels through North & South Carolina, etc., published in 1791. Confused about what kind of bird it was, he calls it “Motacilla Caroliniana (regulus magnus) the great wren of Carolina.”

Bartram included an asterisk beside this wren to indicate that it arrived in Pennsylvania during spring and returned southward after nesting. Wilson, however, could not confirm, “based on my own observations,” that it then nested in Pennsylvania. Audubon added from his experience that the species extended northward “nearly to Pittsburgh” and that a few were seen near the Atlantic coast as far north as New York. He himself found a nest “in a swamp” in New Jersey a few miles from Philadelphia. Nowadays, in contrast, the Carolina Wren nests as far north as Connecticut and occasionally Massachusetts. Like a number of other species in these days of global warming, the Carolina Wren has been spreading northward.

When teaching Avian Biology to undergraduates at UNC before my retirement, I used to make a lame joke, “How did the Carolina Wren get its name? It isn’t any more characteristic of North Carolina than anywhere else in the southeast, and it isn’t even sky blue!” The answer, as we have seen, is that Bartram associated it with his travels in the Carolinas, no doubt both North and South. Because it is such a drab, retiring bird, even the most adventuresome naturalists had overlooked it throughout the colonial period. Wilson was the first to notice its quixotic behavior, “disappearing into holes and crevices … then reappearing”, but Audubon’s image is the first, and perhaps still the greatest, likeness of its boisterous song and frenetic skulking. Despite its ubiquitous presence around homes throughout North Carolina, the Carolina Wren still escapes notice too often. Audubon to this day ranks as one of its keenest observers.

R. Haven Wiley is an emeritus professor in the Department of Biology at the University of North Carolina at Chapel Hill.