“When [author Yunte] Huang visited Mount Airy, or Mayberry U.S.A., he learned of a Chang and Eng exhibit kept in the basement of the Andy Griffith Museum. In other words, a shrine to an American myth of old-timey homogeneity was literally built on the more convoluted reality. Huang knew that the symbolism was almost too much to bear: ‘As Sheriff Andy says, “If you wrote this into a play, nobody’d believe it.” ’ ”

— From ” ‘Inseparable’ Finds Pride, Indignity and Irony in the Lives of Siamese Twins Chang and Eng” by Jennifer Szalai in the New York Times (April 4)

Limitless seems shelf space for biographies of the brothers Bunker.

1. Play at the 1951 Ryder Cup at Pinehurst was suspended on Saturday afternoon to allow U.S. and British golfers to do what?

2. Which of North Carolina’s two U.S. senators has reported rubbing on Preparation H to reduce his eye bags?

3. “Catfish, million-dollar man / Nobody can throw the ball like Catfish can.”Who wrote and sang these lyrics?

4. True or false: The town of Salisbury and the Salisbury steak were named for the same person.

5. In 1991 fans missed their only chance to see hockey great Wayne Gretzky play in Charlotte — why?

1. Both teams attended the Tennessee-UNC football game at Chapel Hill.

2. Sen. Richard Burr. After his 1994 campaign for the House, Burr explained that “After three months of campaigning every day and every night, those bags look pretty bad.”

3. Bob Dylan. He wrote “Catfish” in 1975, after Hunter had left the Oakland A’s to sign with the less penurious New York Yankees.

4. False. According to “The North Carolina Gazetteer,” Salisbury, N.C., most likely was named for the town in England, though possibly for the town in Maryland. The Oxford English Dictionary traces Salisbury steak to physician and health food advocate J. H. Salisbury, who during the Civil War prescribed lean meat and coffee for Union troops suffering from diarrhea.

5. The ice-making apparatus at the Coliseum failed, canceling at the last minute a scheduled exhibition between the New York Rangers and Gretzky’s Los Angeles Kings. He did skate a few warm-up laps for the disappointed crowd of 12,000.

“Clipping services were Googles for the mechanical age: paying clients submitted what would now be called search terms, and readers — often young women — would go through periodicals, line by line, looking for mentions of those terms. As Valerie Raleigh Yow notes in “Betty Smith,” her biography of the author, Smith herself worked for such a company….” 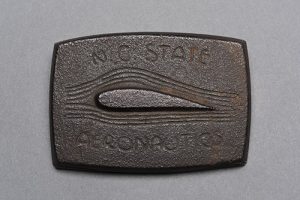 If you know the story on this 2-inch by 3-inch cast iron paperweight (?), you’re one up on me — and on the experts at North Carolina State. “The university archivist,” I’m told, “thinks this likely dates from the 1930s or the 1940s and suggested that perhaps it was a student project rather than an item that was mass produced.”

Regardless, its simple depiction of Bernoulli’s Principle dates it no earlier than 1738.