Lest you need reminding, Election Day is 26 days away. Candidates and their supporters are knocking on your door, calling you at supper time, and filling your mailbox with campaign literature. We have no way to protect your doors or keep your phone from ringing. But we’re glad to help with the mailbox clutter. As with past elections, we’re collecting campaign literature. Instead of dumping those mailings in the recycle bin (we hope you’re recycling!), send them to us.

Our collection of campaign ephemera includes more than 5000 items and dates back to the 1800s. We want to ensure that researchers in 2068 or, heck, 2118 are able to learn a little about today’s campaigns. We’re keen to document campaigns throughout North Carolina for General Assembly, U.S. House, and constitutional amendments. That’s hard to do from our spot here in the Triangle. Please help us. Hold on to those mailers, flyers and voter guides. Then when you can stomach the clutter no longer, send the material our way. The address is:

One final note. We like knowing about the yard signs, particularly ones that strike you as unique. Unfortunately, they take up significant space and it’s hard for us to store them. Before you send us the actual sign, would you mind taking a photo of it and emailing the file to us as an attachment? The address is blythej@email.unc.edu Please remember to tell us where and when you spotted it.

It’s October! That means Halloween is almost upon us. During the days leading up to Halloween, North Carolina Miscellany is posting articles from North Carolina newspapers about one of our favorite Halloween characters, the witch.

In the past if you didn’t know anything else about witches, you at least knew about the witches’ bridle. This magic bridle was used by a witch to turn an unsuspecting man into a horse. The witch would sneak in while her victim was asleep, put the bridle on him and proceed to ride him wherever she pleased until finally returning the victim to his home, sore and exhausted. Sounds like the perfect excuse to sleep in! 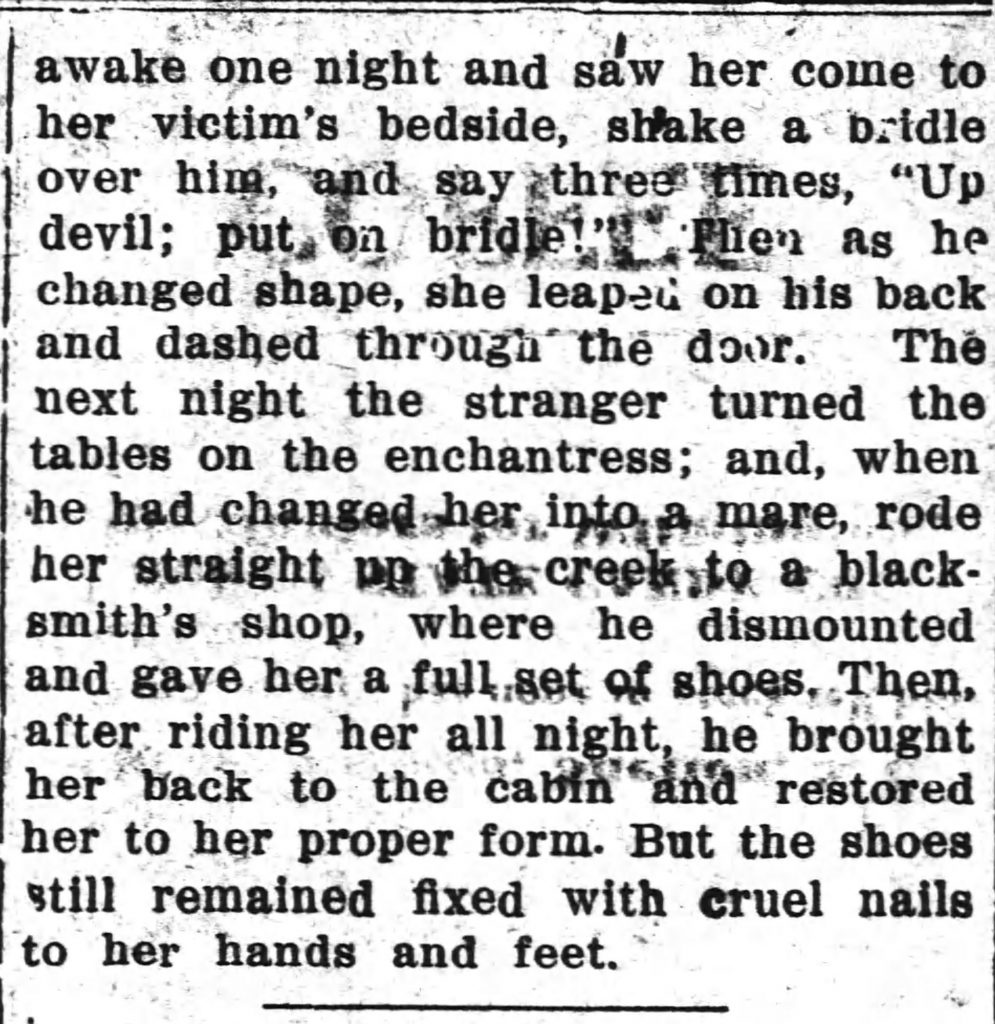 “Superstitions in the Cumberland Mountains.” The Wilmington Dispatch Sept. 1, 1915. p. 8.

1. What innovation made by Warner Stamey of Greensboro in the 1950s soon became common at barbecue joints across the state?

4. What event do the state’s ACC basketball fans remember as “Black Sunday”?

5. In a 1951 magazine article, sociologist Vance Packard described what North Carolina county as “the bootleg capital of America”?

1. Stamey added hushpuppies, a staple at fish camps, to his menu. Before, barbecue was typically served with white bread or rolls.

2. Debutantes — “looking as gracious as any ante-bellum belles.” Inside, Life devoted a four-page spread to Charlotte’s recent challenge to “the social supremacy” of Raleigh.

3. Moseley-Braun. Two weeks earlier, the black Democrat from Illinois had thwarted Helms’ effort to renew a patent for a United Daughters of the Confederacy insignia that depicted a Confederate flag. Most recently Helms, as chairman of the Senate Foreign Relations Committee, temporarily held up Moseley-Braun’s nomination as ambassador to New Zealand.

4. On March 11, 1979, St. John’s and Penn came to Raleigh and posted two of the biggest upsets in the history of the NCAA tournament. St. John’s, the 40th and last team selected, beat No. 2 seed Duke, and Penn of the Ivy League came from behind to beat No. 1 seed North Carolina.