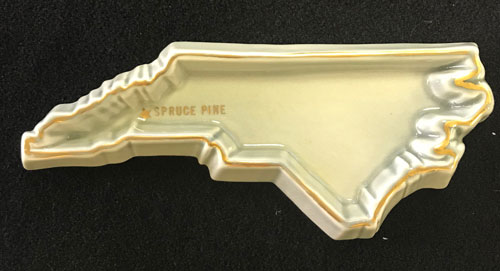 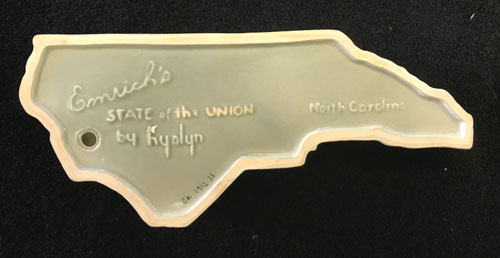 From 1946 to 1997, Hyalyn Porcelain was a prominent manufacturer in Hickory — well chronicled here by the Western Piedmont Museum of Labor & Industrial History — but what’s with the Spruce Pine marking?

“Hyalyn produced a series of these small pieces, apparently thinking of a series of states, although I have seen only North Carolina, Ohio and Texas. I believe it is likely Spruce Pine commissioned the application of the city name.

“Les Moody, founder of Hyalyn, chose Hickory in part because of its location near resources he would use to achieve the clay formula he wanted. Hyalyn purchased feldspar from [the Spruce Pine area] and surely had contacts there who were familiar with the kinds of things they made. [Georgia and Michigan have also been mentioned as sources.] This sort of object probably fell in the category of ‘nifty gifties,’ so named by employees.”