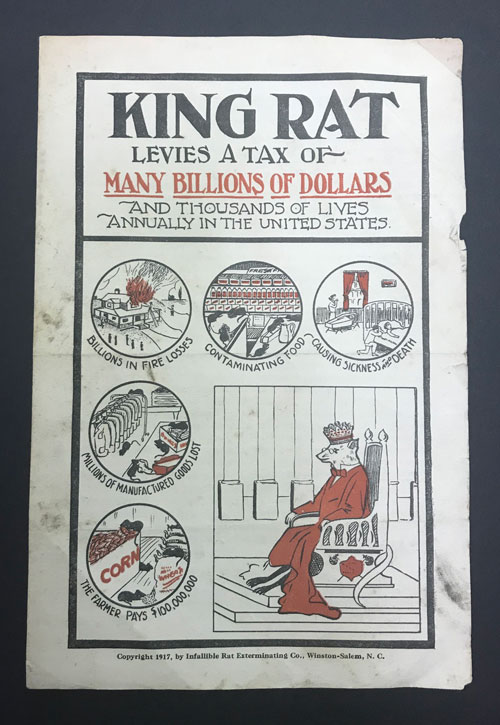 “Mr. J.W. Stephenson, a native of Winston-Salem, has for many years given his entire time and attention to the war on King Rat, working in some of the largest cities in the country and being present during the memorable fight on rats in New Orleans when the city was forced to kill all the rats in order to save herself from being wiped out by bubonic plague….
“Winston-Salem has the chance to become known as a ratless city. Will she embrace the opportunity or will she continue to harbor this filthy, disease breeding pest and retain her reputation of having the highest death rate, per capita, of any city in the United States?”
— From a brochure for the Infallible Rat Exterminating Co. (1917)

I can find no record of Winston-Salem taking up Stephenson’s offer (or, for that matter, of the city’s suffering such an appalling mortality rate). Forty-five years later, however, city government awarded a $9,600 contract for a one-year program that “involved the carefully supervised placing of poison bait in the sanitary sewer manholes to destroy rats and was considered very successful.”