The oft-told story is that the telephone officially came to North Carolina on March 10, 1879. That is typically seen as the day when Major Bowling W. Starke, the manager of the Western Union Telegraph Co. office in Raleigh, strung a wire that carried his voice from his office to his home four city blocks away.

Chronicling America, the archive of historic newspapers created by the Library of Congress, suggests otherwise. You might have heard 1879 was the year of the telephone, but our research says something different.

It was actually a year earlier, on April 14, 1878, when Starke made the first telephone call from Raleigh to Wilmington. Maj. Bowling W. Starke connected to Wilmington, and Governor Vance conversed with former Confederate Attorney General George Davis. Several men formed a choir to sing several hymns, “which were re-duplicated by singers in Wilmington.” The “melodies were perfectly audible,” and the first long-distance telephone call in North Carolina was a success.

People immediately saw the potential for the telephone as a tool to connect people in new and exciting ways.

The Western Sentinel (Winston-Salem) declared the telephone to be “the greatest achievement of modern science” and later said that it had “scarcely ceased to be a cause for amusement…” The Farmer and Mechanic (Raleigh) later facetiously predicted that telephones would eliminate the need for church services and houses of worship.

A frantic rush followed to connect cities and citizens via telephone. The “telephone craze” was on. A month after Vance’s telephone call, the towns of Winston and Salem were “completely cobwebbed with telephones”.

The Farmer and Mechanic imagined that Raleigh “must look like a big cob-web” with all the telephone wires stretched across the city. The excitement was so palpable that one newspaper advertisement simply advertised that people could come look at the telephone at a local drug store.

In 1879, Starke threaded the city of Raleigh with additional telephone wires, and communication was soon established between Raleigh and Durham. A few days later, several houses in Chapel Hill, including the home of Julian S. Carr, had telephones. 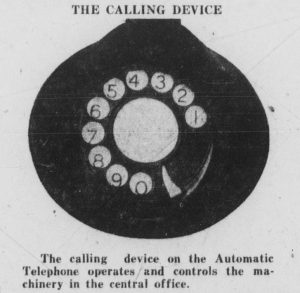 By the end of 1879, The Raleigh News reported 96 telephone wires in Raleigh, including the Supreme Court room, with more to come. In May 1880, telephone wires between Charlotte and Greenville, SC were established. It was prophesied that soon the telephone would “be so common that everyone can sit on his doorstep and talk with everybody else.” 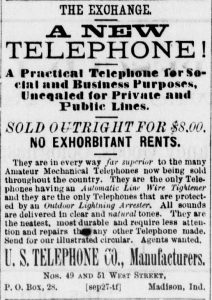 Throughout the state, people were excited at the possibilities the telephone presented. Part of that excitement involved just making civic life more convenient. Doctors could be quickly called in case of emergency, as could fire departments.

Cotton factories in Catawba, Lincoln, and Gaston counties built a telephone system to process orders faster. The Farmer and Mechanic editorialized that once Raleigh residents could call cities like Richmond or Augusta, “the saving in postage, in time, and in mistakes, will be wonderful.” The telephone represented a major change for North Carolinians.