“Duke was a case of loathe at first sight for me — Middle Gothic in celophane; gigantic, turreted, battlemented entrances with pneumatic hinged swinging doors in place of iron portcullisses — innumerable chimneys — all dummies — there being a central heating plant; concrete gargoyles, great ivy vines, clamped on with tin. Cloistered picture show. Replica of Westminster, with elevator in tower. Leaded windows in library that let in no light….

“Chapel Hill is lovely & has all but restored my customary serenity & faith in capitalism. I love the place and want to live here. It is an Oxford planted on more fertile soil than Methodism, & unraped by Coca Cola [Emory University] or Chesterfield [Duke]….”

Rainey and Woodward had been friends since attending Emory together. Rainey was embarking on 42 years of teaching English at Georgia Tech. Woodward, then researching Georgia populist Tom Watson, would receive a PhD in history from UNC in 1937.

When classes officially began on Tuesday, many in-state undergraduate wallets were $8,374 lighter after paying tuition and fees. Over the past four years, tuition has increased about $2000. However, a century ago, the cost of attending UNC held steady for 38 years. Between 1886 and 1924, tuition was only $60 for in-state students. The advertisements from a 1900 issue of the Fisherman & Farmer and an 1887 issue of The Progressive Farmer provide information about the University of North Carolina at Chapel Hill, including tuition and available curriculum.

Using an inflation calculator to adjust prices according to the historical Consumer Price Index data, a tuition payment in 1900 of $60.00 would be around $1,654 in today’s currency. The second advertisement lists room and board in 1887 at $5.00, which would be around $138.00 for a modern semester. In addition to this, education demand has gone considerably up as teaching faculty increased from 38 in 1900 to 3,696 active faculty in 2013. The newspaper images were obtained from Chronicling America.

“With 36 million manuscripts and a million rare books, the Harry Ransom Center, on the campus of the University of Texas at Austin, is a standout in the exclusive club of the world’s great museum-quality collections….

“The Ransom Center is on a buying binge, but not with the long-dead titans of literature in mind. Instead, the library is pursuing the private papers of contemporary authors [and] is out to play a role in literary-canon formation….

“Alice Adams, the [Chapel Hill-reared] novelist and short-story writer, was a major acquisition in 2000 and now seems to be the subject of a subtle awareness campaign…. En route to the [David Foster] Wallace archive, one staffer pointed out the 27 boxes comprising the Adams collection. Later, another employee, while showing me [Don] DeLillo’s letters, offhandedly mentioned her love for Adams’s stories. ‘She really should be better-known,’ the woman said, looking up at me hopefully.”

— From “Canon Fodder” by Anne Trubek in The Atlantic 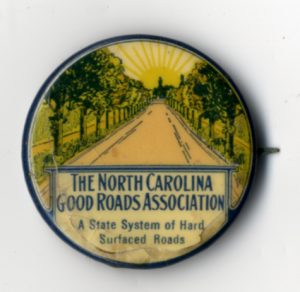 On this day in 1913: As part of his proclaimed Good Roads Days, Gov. Locke Craig, clad in overalls, takes up a shovel on a Buncombe County work crew.

Craig’s call for two days of volunteer maintenance on the state’s dirt roads elicits mixed response. In Guilford County more than 1,000 men show up; students at State Normal and Industrial School for Girls put 400 rakes to use. At Chapel Hill, acting UNC president Edward Kidder Graham takes the lead in leveling Franklin Street. Lenoir College students, according to The Charlotte Observer’s correspondent, “livened up the occasion by giving cheer after cheer for Hickory and Governor Craig.”

In Raleigh, however, “There was practically no response on the part of citizenship. . . . ”

“After [Nina Simone’s 1961 concert at Memorial Hall, UNC Chapel Hill student] Frank Craighill arranged for dinner at one of the area’s newest steak houses, the Angus Barn. Craighill [president of the social club that sponsored the concert] had picked the restaurant with care… and when Nina and the trio walked in as guests of the university, a big round table was already set and waiting for them. It was easily one of the most elegant meals any of them had eaten on the road….

“[But] an encounter later at the train station in Raleigh left no doubt they were in the South. As they waited for the train to New York, a white woman claimed she had lost her purse. The station manager found the purse in the men’s restroom. One of the waiting passengers asserted that [drummer Bobby Hamilton] had been the last person to use it, and in a flash police… zeroed in, all but accusing him of theft. But Nina leapt to his defense. ‘She just went crazy,’ [bassist Chris White] remembered. ‘She read them the riot act…. She was just as black as she could be with these guys and they left us alone.’ ”

— From “Princess Noire: The Tumultuous Reign of Nina Simone” by Nadine Cohodas (2010)

A footnote: Frank Craighill went on to become a pioneer in the field of sports marketing.

On this day in 1931: The world’s only actual-size replica of the Parthenon, constructed in Nashville in 1896 to celebrate the Tennessee centennial, reopens after extensive renovation and additions.

Newly depicted on a pediment is eight-year-old Randall Jarrell, who posed for the sculpture of Gunymede, cupbearer to the gods. Reads the inscription, signed by the sculptors and dated 1925: “To Randall — our most interested and interesting visitor.”

As an adult, Jarrell will become more prominently celebrated as literary critic for The Nation, poetry editor of the Yale Review and teacher at Woman’s College in Greensboro.

At age 51, he is fatally struck by a car while walking along a dark road in Chapel Hill.