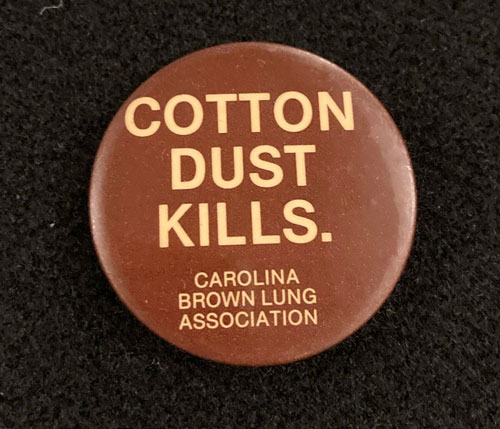 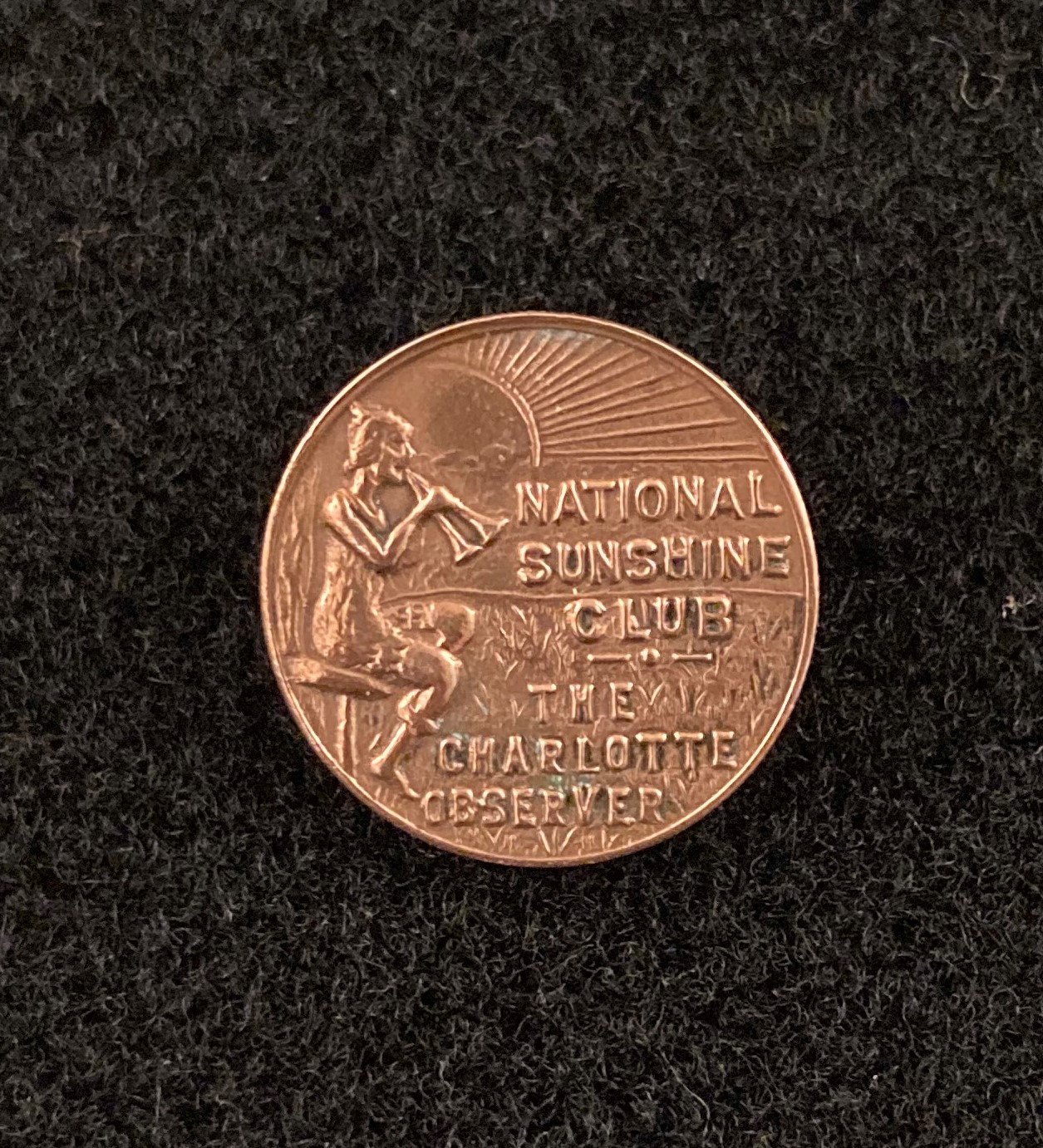 The National Sunshine Club was part of Observer Junior, an eight-page tabloid insert in the Charlotte Observer, 1928-1934. Sending in coupons from four successive Sunday editions would bring you this pin — and if your story, joke, poem, cartoon or pen-pal letter was published, you could even win a dollar! 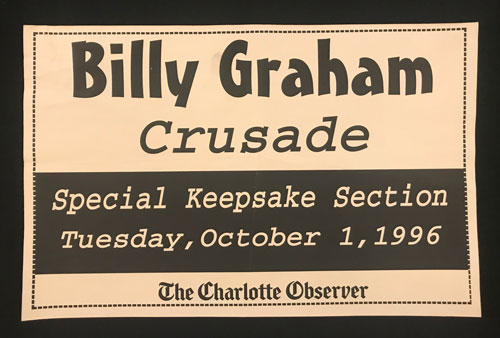 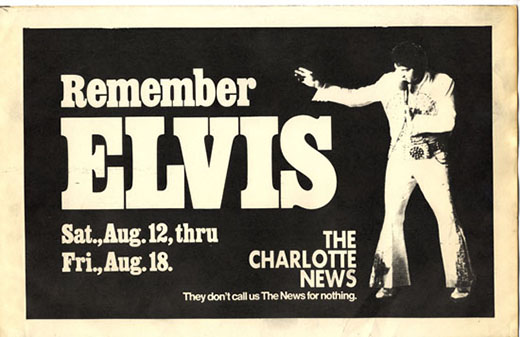 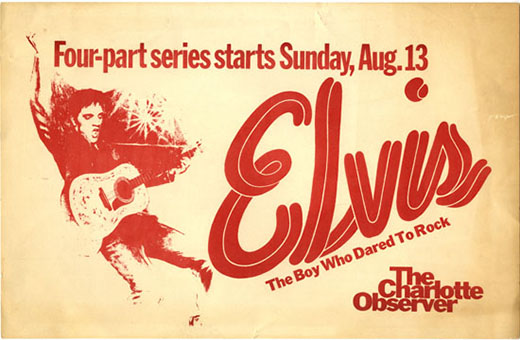 When Elvis died — Aug. 16, 1977 — the Charlotte Observer wasn’t prepared for the enormous demand for single copies. (We weren’t the only ones.)

A year later, however, the Observer and the afternoon Charlotte News had days of commemorative coverage lined up, as these two rack cards illustrate.

“[During World War II] the Charlotte Observer took up the hunt for un-American activities, claiming that over 2,000 subversives were present in the area and arguing that the U.S. Constitution did not protect anyone accused of Communist or Nazi sympathies. The paper chastised those who complained about FBI investigations as more concerned with civil liberties than with victory….

“The bureau examined a number of cases, including the rumor of a Nazi spy ring in Salisbury, and found no saboteurs….”

“Sgt. John Dwyer, who was not listening to the radio, was on the desk at the Charlotte Police Department that Sunday night. He became aware of the hysteria when a woman walked in, an infant in one arm, a Bible in the other and a trembling boy clutching at her dress. She asked for protection from Martians.

“ ‘Sgt. Dwyer admitted that it was the strangest request the department had ever had,’ The Charlotte Observer reported the next morning beneath the banner headline: ‘Thousands Terrified By Mock-War Broadcast.’ He did his best to assure her all was well and sent her home.

“She was but the vanguard of Charlotteans who would be appealing to police that night, most of them by phone.

“At the Observer, calls poured in seeking information on the invaders’ advance. After answering 100, those on duty lost track of the number.

“ ‘Many of them refused to believe that what they heard was a play,’ the paper said. ‘Others seemed panic stricken.’ ”

— From “Remembering the night WBT dominated the scarewaves” by Mark Washburn in the Charlotte Observer (Oct. 30, 2013)

“My grandfather ate the Charlotte Observer. Regularly. The entire paper. I’m not making this up….”

— From “Here’s one way to eat newsprint” by Walter Dellinger (letter to the editor of the Washington Post, April 8)

“But there is another aspect to the ‘one-party press,’ as Governor Stevenson has dubbed it, that cannot be passed over lightly. This is the tendency of some newspapers to give emphasis in their news columns in accordance with their editorial viewpoints.

“This newspaper has very stringent standards for reporting political campaigns, and every person who handles the news is under positive instructions to give the opposing parties and candidates an absolutely even break in the news columns….”

This editorial may have been targeting the rival Charlotte Observer, which endorsed Dwight Eisenhower over Stevenson. I found it reprinted on the backside of a flyer promoting a speech at the Armory Auditorium by Truman’s vice president, Alben Barkley.

A Charlotte News headline writer had played a small part in the 1948 presidential election, coining a catchy but unwelcome nickname for the States’ Rights Democrats.

On this day in 1911: The Glidden Tour, a cross-country caravan promoting the automobile, approaches North Carolina from Virginia, where residents have complained about their dogs being run over. The Charlotte Observer, however, doesn’t hesitate to roll out the welcome mat:

“In later years — probably to burnish his image as a hero and spokesman for his sport — [Ty Cobb] and his boosters went out of their way to note that his early encounters with the Negro race were either inconsequential or benign. A 1909 editorial in the Charlotte Observer said, ‘Cobb, born with the prominence that is universal among white persons in Georgia, sought no further prominence by buckshotting his compatriots. So far as is known, he never attended a lynching.’

“Faint praise indeed, but baseball was just as racist as the rest of society…..”