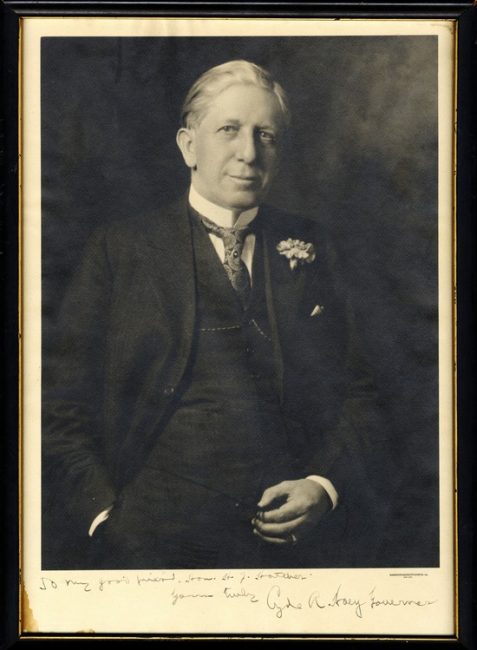 As with many politicians, Hoey’s attitudes toward African-Americans and women have not aged well.

“Weeks after the Brown [vs. Board of Education decision in 1954], the press hailed the latest poster boy for the ‘soft Southern approach’…. Samuel J. Ervin, a Harvard-educated state Supreme Court justice, arrived in Washington ready to lend his legal expertise and ‘country lawyer’  charm to the segregationist cause.

“Governor William Umstead tapped Ervin to complete the term of Clyde Hoey, who died in his office…. Ervin privately boasted that he was as ‘unrepentant and unreconstructed’ as Hoey, a Confederate captain’s son….

“Leaders of the Southern opposition saw in Ervin a fresh face that could elevate the segregationist defense above the white supremacist rhetoric of their fathers’ generation.”

This week’s speculation over the identity of Clyde Hoey (and a camera-shy Harry Truman?) brought to mind shorpy.com, “a vintage photo blog featuring thousands of high-definition images from the 1850s to 1950s” (’60s, actually). Some are familiar (Lewis Hine, Dorothea Lange), but others may surprise.

“During the early 1950s [the Permanent Subcommittee on Investigations  of the Committee on Government Operations] had been chaired by Senator Clyde Hoey, a mild-mannered Democrat from North Carolina. Under Hoey’s leadership the subcommittee had investigated such bland subjects as… the reorganization of the Bureau of Customs. [Joe] McCarthy, the ranking Republican, had attended fewer than 20 percent of the public hearings.

“Only once did McCarthy get into the flow of action. During a hearing on the sale of government-owned tankers, he pummeled a witness for supposedly having engaged in trade with Red China. ‘You are either… the greatest dope or dupe of all time… or you are making a vast amount of money soaked in American blood.’    The witness was understandably upset. ‘Why don’t you ask questions the way Senator Hoey does? Be a gentleman,’ he pleaded.’

“[After the new Congress was sworn in in 1953] Hoey quickly resigned from the subcommittee. Having worked with Joe in the past, he did ‘not wish to be responsible for what might develop.’ ”

— From “A Conspiracy So Immense: The World of Joe McCarthy” (2005) by David M. Oshinsky

Pictured:  Pinback button from Hoey’s successful campaign for governor in 1936.