“When Huck Finn put on his patched, faded blue denim overalls to go catfishing, he never dreamed he was anticipating a fashion trend for 1953.

“Denim’s revolution is a product of the two-day weekend, the trek to the suburbs, and the increasing informality and casualness of U.S. living. Schoolboys started it, in the 1930s, with a penchant for ‘levis’ [from] Levi Strauss.  Spare-time yachtsmen found that salt water gave the deep blue levis a faded look, which became so fashionable that youngsters dumped bleach into the family wash to fade their own…. U. S. makers decided that if people preferred light blue denim, they had better start making it….

“The denim revolution was helped along by Mary Shannon, fashion stylist for Cone Mills. The company brought out more than 50 new kinds — stripes, plaids, multicolored combinations. At the 1949 showing, Mrs. Shannon herself appeared in a denim dress of her own design, set off delighted murmurs in the trade.

“One high-fashion stylist even produced a limited collection of mink-trimmed denim suits — for California, obviously. [And] men’s oxford grey denim suits have created a stir….

“For the ailing U.S. cotton industry, long ago threatened by synthetics, the coronation of Cinderella denim proved that where there is a way to make homely cottons attractive there is a will to buy.”

“As transportation links improved… between the South and the rest of the nation, it became possible to export blackberries, either fresh or dried, and this possibility joined the legion of other ideas how the region might escape the iron grip of cotton….

“Central North Carolina seems to have found the greatest bonanza…. Salem shipped a million pounds of blackberries in three years in the middle 1870s, earning half a million dollars. With cotton selling at 10 cents a pound, this would be the equivalent of 9,000 bales. ‘Whole trains full of berries swept out of this busy and thriving little city during the year,’ one envious Atlanta reporter wrote, ‘and the people were flush and full pocketed, while their neighbors were all out at the elbows and waiting the coming of some staple crop.’ ”

— From “Picking Blackberries and Getting By after the Civil War” by Bruce E. Baker (Southern Cultures, Winter 2010)

The summertime is in full swing here in Chapel Hill, and like most people I’m running around looking for something to wear that won’t make me pass out from heatstroke in ten minutes or less. A surefire answer, for me at least, has been to make some garments myself. For a quick course in choosing fabrics and laying out pattern pieces, come in to the NCC’s lovely (and air-conditioned) reading room to peruse Margaret Hoffman’s Sew Far, Sew Good!. This 1958 publication starts with the aforementioned textile basics, expounds on some design philosophy, and even delves into a modest gallery of women’s apparel silhouettes and style lines (see sample image below). 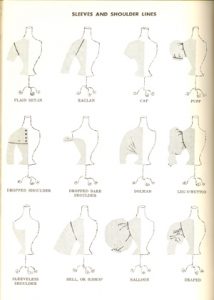 And even if you’re an accomplished seamstress, pay us a visit for some textile inspiration: I recently found D.A. Tompkins’ Cotton Values in Textile Fabrics, printed in 1900, in our stacks. This fantastic volume showcases swatches of NC-produced cotton fabrics, from a North Carolina-made 10-ounce duckcloth to imported Swiss embroidery. My personal favorites are the rich violet “Amisilk,” a mercerized cotton with a sateen face, and the green and yellow checked Madras shirting. 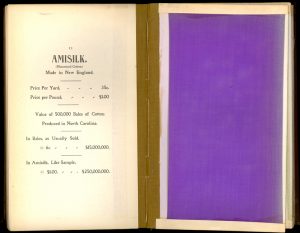 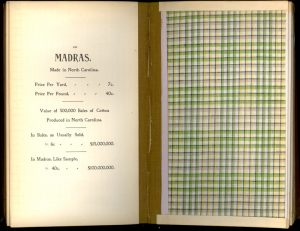