“….And offend [Doug Marlette] did. In 2002, when he drew a cartoon showing a man in Arab headdress driving a Ryder rental truck hauling a nuclear missile — under the caption ‘What Would Mohammed Drive? — he set off a campaign orchestrated by the Council on American-Islamic Relations; he and the newspaper received more than 20,000 e-mail messages from people who accused him of bigotry and blasphemy and some who included death threats.

“Writing about the incident in The Tallahassee Democrat, where Mr. Marlette was then on staff, he said: ‘In my 30-year career I have regularly drawn cartoons that offend religious fundamentalists and true believers of every stripe, a fact that I tend to list in the “accomplishments” column of my résumé. I have outraged fundamentalist Christians by skewering Jerry Falwell, Roman Catholics by needling the pope, and Jews by criticizing Israel. I have vast experience upsetting people with my art.”

Marlette, a Greensboro native, last lived in Hillsborough. His 1988 Pulitzer recognized cartoons he had drawn about PTL at the Charlotte Observer. 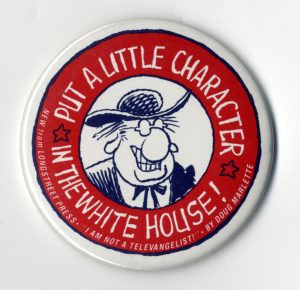 Will D. Campbell, a towering and inimitable figure in the civil rights movement and the inspiration for the character of Will B. Dunn in Doug Marlette‘s “Kudzu” comic strip, died Monday in Nashville. He was 88.

Pictured: A pinback button promoting ” ‘I Am Not a Televangelist!’ “ a 1988 collection of “Kudzu” strips.