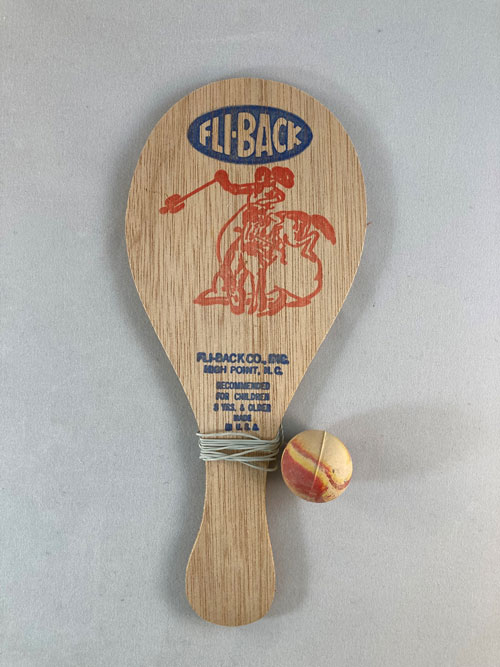 “In 1931, James Emory Gibson began manufacturing paddle ball games after being inspired by a promotional toy his daughter brought home. As demand for the games grew, Gibson began producing paddle balls, yo-yos and spinning tops under the name Fli-Back.

“Although Fli-Back was sold to the Ohio Art Company (makers of the popular Etch-A-Sketch) in 1972, the company continued to manufacture Fli-Back paddleball games in High Point until 1983.”

— From “Fli-Back items continue to live on at museum” by Jennifer Burns of the High Point Museum, Oct. 2, 2004, in  the Greensboro News and Record

I visited the Fli-Back plant in 1976, when annual sales still topped 5 million but were speeding downhill. As an early paddleball promoter lamented to me, “There isn’t a kid on earth who can hit the damn thing a second time, because nobody’s taught them how to do it.”