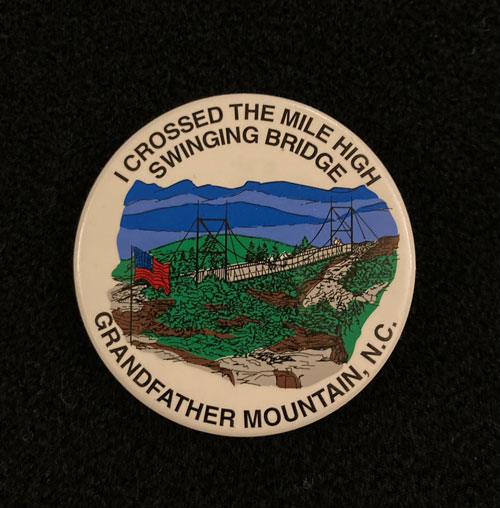 “The swinging bridge was one of two options when [Hugh] Morton decided to get visitors from the gift shop-museum parking lot to the rocky overlook. ‘We had to have some way to get them across, and we could either have a stationary bridge or a swinging bridge,’ he said. ‘We decided the swinging bridge would be more fun, and would make a good conversation piece.’
“Some 30 percent of women visitors, and a smaller percentage of males, however, think it best not to cross the bridge.” 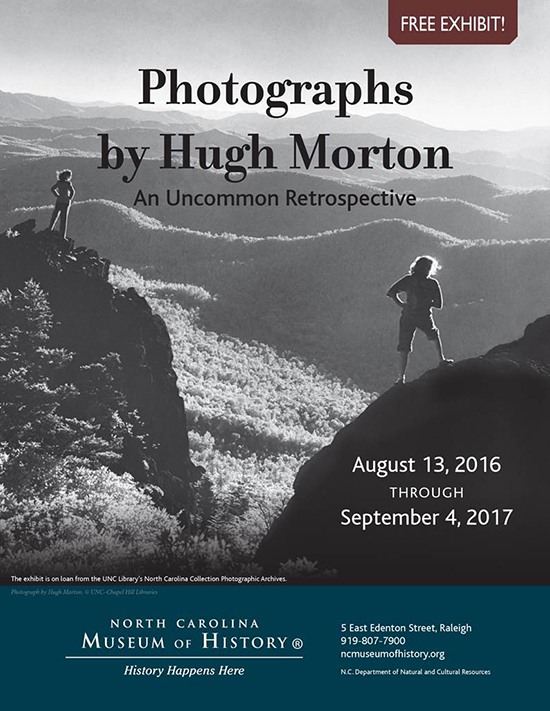 Photographs by Hugh Morton: An Uncommon Retrospective opened this past Saturday at the North Carolina Museum of History in Raleigh. The Museum of History is the sixth venue for the exhibition since its debut in August 2013 at the Turchin Center for the Visual Arts at Appalachian State University in Boone.  The Morton photographs will be at the museum for more than a year!  Admission is free.  If you are looking for ways to beat the triple-digit heat index temperatures we’ve been experiencing in the eastern part of the state in recent days, a visit to Museum of History may be just the ticket.  The exhibition looks terrific!  The museum’s staff designed the exhibition to flow chronologically and several images sport new descriptive labels, so if you’ve seen the exhibition once before it is worth seeing it again.

There will be several programs at the museum related to the exhibition in the coming months, including “Hugh Morton, More Than Bridges and Bears” with Hugh Morton’s grandson Jack Morton and the exhibition’s curator Stephen J. Fletcher, North Carolina Collection Photographic Archivist, on December 8, 2016, 5:30-8:00 pm.

— A view thanks to Hugh.

— “I wanted to put to rest…  the idea that there were no African-Americans in Western North Carolina.”

— “Likely the most architecturally ‘fun’ house in Durham.”

“In Wayne County, N. C., a depressed farmer cut off the rear end of his ‘disused’ automobile, fastened shafts to the axle, backed in a mule, went riding…. Soon the roads of eastern North Carolina were overrun with similar vehicles pulled by mules, horses, oxen, goats or a pair of husky boys. North Carolinians, many of whom had been Hoovercrats in 1928, transposed two letters of the term, called their conveyances Hoovercarts.

“In Goldsboro, one Gene Roberts, newshawk, promoted a Hoovercart Rodeo as a publicity stunt. Goldsboro entertained its biggest crowd since William Jennings Bryan spoke there 34 years ago. Some 400 Hoovercarts paraded through the town…. Filling stations did their best day’s business in many a month — selling hay….

“[Soon after] rodeos and parades were held in Oxford (469 entries), in Roxboro, Kinston and Wendell….”

Sunday night gave me the opportunity not only to see my old friend Ed Williams inducted into the North Carolina Journalism Hall of Fame, but also to inquire about a longtime curiosity of mine: Who named the “Hoover cart” (the more common spelling), that emblematic vehicle of the Great Depression?

Gene Roberts, a Wayne County native who went on to a Pulitzer-studded newspaper career, told me the coinage in fact belonged to his father, Eugene L. Roberts Sr., Time’s aforementioned “newshawk,” who combined preaching with publishing the weekly Goldsboro Herald.

The Depression eventually ended, but the Hoover cart lived on, at least in political rhetoric….

“Nowhere in the United States this year have I seen a single exhibit of that famous North Carolina farm invention — that product of ingenuity and hard time, of personal despair and political mockery — the Hoover cart….

The credit line on this photo of Truman admiring a Hoover cart will surprise no reader of the Miscellany or A View to Hugh.

Democrats in Eastern North Carolina were still getting mileage out of the Hoover cart even as late as 1952.