“What few people know is that the South wasn’t always so segregated. During a brief window between the end of the Civil War and the turn of the 20th century, black and white people lived next to each other in Southern cities, creating what [Charlotte] historian Tom Hanchett describes as a ‘salt-and-pepper’ pattern.

“They were not integrated in a meaningful sense: Divisions existed, but ‘in a lot of Southern cities, segregation hadn’t been fully imposed — there were neighborhoods where blacks and whites were living nearby,’ said Eric Foner, a Columbia historian and expert on Reconstruction. Walk around in the Atlanta or the Charlotte of the late 1800s, and you might see black people in restaurants, hotels, the theater, Foner said. Two decades later, such things were not allowed.” 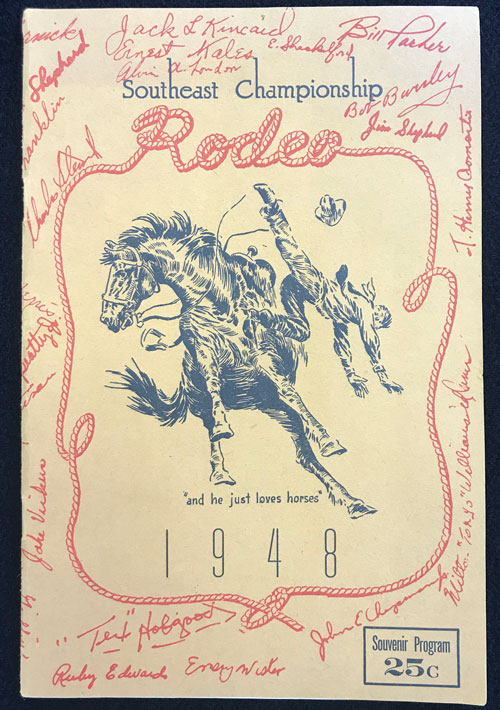 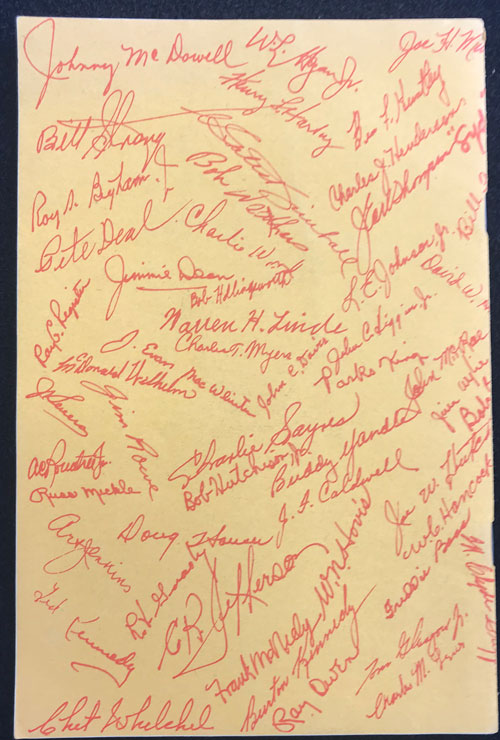 The week-long Southeast Championship Rodeo and World’s Greatest Wildwest Show was held at Charlotte Memorial Stadium in April 1948. Curiously, the autographs printed on the program cover belong not to the visiting rodeo stars but to the sponsoring Jaycees.

Among events: a donkey-riding contest for kids. “Center donkey is for the girls,” the program explains. “End donkey is for little white boys, and the donkey in front of the colored section is for the little colored boys….”

“Segregation of public facilities — including water fountains and restrooms — was officially outlawed by the Civil Rights Act of 1964, signed into law by President Lyndon B. Johnson….

“In Raleigh, Wilmington and other Southern cities, businesses seem to have complied grudgingly but promptly…. In smaller towns and rural areas, however, Jim Crow customs lingered longer.

“Local history librarian Beverly Tetterton remembers seeing fading ‘White’ and ‘Colored’ signs on the restrooms of shuttered gas stations when she first came to town in the 1970s.

“Elliott Erwin of Magnum Photos took a celebrated black-and-white photo of a segregated water fountain in North Carolina in 1950.”

— From “When did segregated water fountains end?” by Ben Steelman in the Wilmington StarNews (June 5, 2009)

“In one of his anecdotal books, ‘Only in America,’ [Harry] Golden said that he once persuaded a North Carolina department store owner to put an ‘Out of Order’ sign over his ‘white’ drinking fountain. Little by little, whites began drinking out of the ‘colored’ fountain, and by the end of the third week ‘everybody was drinking the “segregated” water.’ ”

“I was asked if I was open to political questions and said ‘yes.’ But I did not know until I heard the question if I would answer it or not. One of the first was, ‘Would I consider that the Administration had done all that it could to give leadership in the question of desegregation.’

“Suddenly I could visualize the headlines which would focus on this much-argued point in the South as against the real reason for our visit. So I promptly announced that I had come here to talk about the United Nations and I thought that my views on the subject of civil rights were well enough known for me not to discuss them on this particular visit. That saved me from any further difficulties on that score.”
— Eleanor Roosevelt in her “My Day” column, recalling her 1956 visit to the YWCA in Asheville

Though reluctant to address race in her talk, Roosevelt had stipulated a venue that would accommodate both blacks and whites — scarce in still-segregated Asheville.

On this day in 1853: Raleigh hosts the first North Carolina State Fair.The fair will be racially integrated until 1891, when segregationist pressures lead to designation of a “colored day.” However, blacks continue to attend in significant numbers each day.

“One day in the early 1960s, when drinking from the ‘Whites Only’ water fountain on the factory floor [in Taylorsville, my husband, Mike Claman] had had enough of it. He tore off the signs. He then went to the ladies’ and men’s bathrooms and tore off the signs there, announcing that there would be no more segregation within the plant.

“The outcry was horrendous, with delegations marching into Mike’s office. He politely informed the workers that if they did not want to drink the same water, from the same fountains, they could go thirsty; if they did not choose to use common facilities, they would have to wait until they went home….”

“In [a ‘Voices of the White South’ article in Life magazine in 1956] a 38-year-old white sharecropper in North Carolina summed up his support of segregation and his views on his black neighbors and fellow farmers this way:

“ ‘We’re working to own our farm. We want to hurry up and get someplace. But they just don’t work. They just don’t care. All they’re looking for is the end of the week when the landlord will shoot ‘em a little money. [T]hey take a bath once a month, and their fields don’t look like they’s hardly tending them.’ At the same time, according to LIFE, the sharecropper’s approval of segregation was ‘based as much, or more, on personal pride than notions of color. He would rather have a Negro living next door than he would a white “redneck” or “peckerwood.” In his view, “there’s nothing sorrier than a sorry white man.” ‘

“The white sharecropper’s wife, LIFE wrote, ‘also approves of segregation and will not let her 9-year-old daughter play with an 8-year-old Negro neighbor. This is the reason she gives: “If our landlord came down here and saw her playing with a colored boy, he wouldn’t respect us. Only poor class whites do that. We’re trying to keep our self-respect and keep the highest level socially we can. We’re willing to work with the Negroes, but that’s as far as we’ll go.” ‘”

— From “LIFE and Civil Rights” at life.time.com

On this day in 1947: Before 1,500 fans at Charlotte’s Griffith Park, Buck Leonard has three hits to lead the Homestead Grays to a 17-0 exhibition victory over the hometown Charlotte Black Hornets.

First baseman Leonard began his career in 1925 with his hometown Rocky Mount Black Swans. He becomes best known for his 17 seasons with the Homestead (Pa.) Grays. The Grays are the New York Yankees of the Negro National League, and Leonard and teammate Josh Gibson are the league’s Babe Ruth and Lou Gehrig.

In 1972, Leonard, despite having being barred from the major leagues by segregation, will be inducted into the Baseball Hall of Fame.

“The African American novelist Charles Chesnutt, who grew up in North Carolina in the 1860s and 1870s, noted the absurdity of ‘walking around in a place where the color line shifted under his feet.’

“Black and white were ‘fluid categories’ in New Bern….  Mixed couples and their children lived in peace in the town into the 1880s…Segregation was not rigid in the South for at least another 10 years; for example, separate railroad passenger cars were not required by North Carolina until 1899….

“When the decennial count used the term ‘mulatto’ in the decades after the war, some families were able to move to that status from the category ‘black.’ ‘

On this day in 1960: Denied admission to white Dunn High School, seven Lumbee Indian students, along with several parents, stage a sit-in and are charged with trespassing.

A few N.C. counties operate separate school systems for whites, blacks and Indians. But Harnett County has no high school for Indians and instead buses them to East Carolina Indian Institute in Sampson County, a daily round-trip of 70 miles.

When it becomes clear that the Lumbees’ protest has failed, the American Friends Service Committee arranges for 11 of them to live with families and attend high schools in Raleigh, Greensboro and High Point.

Among contributors to their expense fund: Eleanor Roosevelt.

The next fall the Harnett County school board gives in and admits Lumbees to Dunn High.