On this day in 1944: Former Gov. O. Max Gardner, a Democrat, enjoys himself in a letter to the president of Massachusetts’ Pepperell Mfg. Co., a Republican, on the occasion of FDR’s reelection:

“I thought about you around midnight November 7th when the first glimmering results came in from Massachusetts, and I had no difficulty in recognizing that you were again in the minority..

“We are going to start on this glorious Fourth Term on a wider and more complete distribution of the wealth of New England, starting with you and terminating at Shelby, North Carolina, by way of Washington, D.C.”

On this day in 1930: Fay Gardner, wife of Gov. O. Max Gardner writes in her diary about the worsening Depression: “A run made today on Commercial Bank here in Raleigh, also on the 1st National at Gastonia. Everybody losing confidence and becoming panic-stricken.”

The next day’s entry notes that “eleven banks closed their doors today.”

Before the year is out, 93 banks across the state will have gone under. 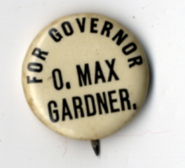 “To combat agricultural depression and the hand-to-mouth cash crop system, North Carolina has  been conducting what its able Governor Oliver Max Gardner calls a ‘Live-at-Home’ campaign. The economic theory is that the home-living husbandman raises his own food and feed, patronizes local production plants, reduces his dependence upon extrastate sources of supply. [Included in the campaign] was an essay contest among 800,000 North Carolina school children. Last week Governor Gardner awarded prizes in the House of Representatives.

“Before him, crowded cheek to jowl, sat whites and blacks, men and women, boys and girls, for the ‘Live-at-Home’ movement included Negroes. Newsmen remarked with astonishment upon the sudden evaporation of race prejudice. Negroes spoke from the same rostrum as Governor Gardner about the ‘recovery of their race’s self-respect.’

“To Leroy Sossamon, blond and blue-eyed, of Bethel High School and to Ophelia Holley, chocolate brown, Governor Gardner awarded two silver loving cups for their essays. Then, with them, he walked out before the statue of Governor Charles Brantley Aycock to be photographed. His political friends, suddenly apprehensive, reminded him that no southern Governor had ever had his picture taken publicly with a Negro, warned him that such a photograph would be used against him in future campaigns. Undaunted, Governor Gardner ranged the black girl on his right and the white boy on his left, ordered the photographer to proceed. Said he: ‘If I ever get into politics again, I’ll use this picture for myself.’ ”

“I hope when I wear them that I do not start counting ten and jump!”

Gardner devised the gift to tout the value of synthetics research, which had invented nylon for parachutes just in time to offset the Japanese monopoly on silk.